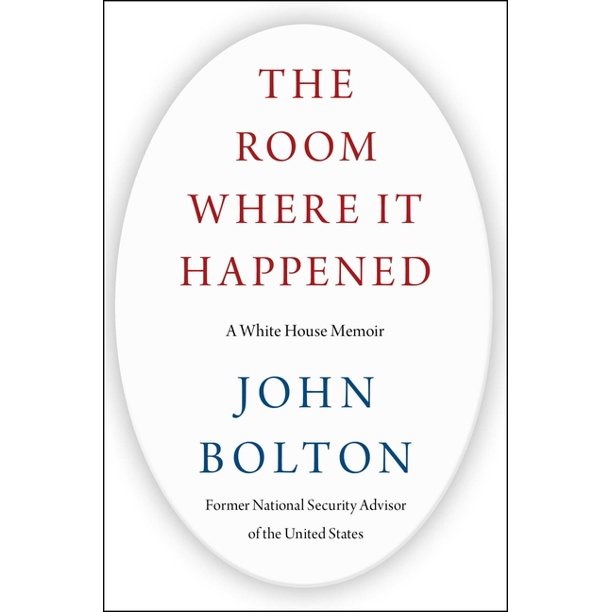 The Room Where It Happened, written by John Bolton, could be the result of a devious, but well-conceived plan that Bolton executed to perfection.

Bolton says in his book that President Trump was interested in placing him in a key post within his administration.  Bolton, in turn, was interested in serving as long as the position was either Secretary of State or National Security Advisor.  The latter post is the one he was ultimately offered and accepted.

In his book, Bolton quotes everybody verbatim (rather than paraphrasing) as he recounts various meetings and conversations that occurred during tenure as National Security Advisor from April 2018 to September 2019.  Unless endowed with some kind of superhuman ability, there is no way Bolton or anyone else on the planet could remember every single word numerous individuals, including himself, said months ago, weeks ago, days ago, or even several hours ago.  Unless Bolton was blessed with total recall, it’s impossible to quote each word someone had spoken in the past without having a memory aid to assist him.  His associates say Bolton was a prolific note-taker during meetings, but those notes, even if taken with the proficiency of a professional stenographer, were not supposed to leave the White House premises without being destroyed.

When Bret Baier of Fox News interviewed Bolton on June 23rd, Baier, who said he read the book, asked Bolton how he was able to remember so many details of his experience, including so many quotes, during his tenure as National Security Advisor.  Bolton replied that “this was the best recollection I could put together.  I am blessed with a pretty good memory and thought about how to do this.”  Bolton also told Baier that personnel at the White House were not permitted to leave the building without first destroying their notes and papers.  Bolton said he and others put their notes in “burn bags” and that no notes were taken with him after he left the White House.

So how was Bolton able to write his tell-all memoir in such excruciating detail?  If one accepts that Bolton would have needed a memory aid, such as a recording device, to help him recall word-for-word what he and others had said, then it begs the question how was he able to accomplish this for such a long period of time without being detected by security guards?

It is quite possible that Bolton could have had a micro voice recorder on his person, which security personnel failed to discover as he entered and left the White House executive offices and other places he visited.  You can buy a micro voice recorder online that is about the size of a paper clip with a storage capacity of ninety hours.  It wouldn’t be the first time an embarrassing security breach such as this occurred.  White House aide, Omarosa Manigault, who wrote an unflattering book about her experience in the Trump administration, released a recording she made of her firing by Chief of Staff John Kelly in the Situation Room.  This embarrassing breach of security protocol was not deemed to be illegal because no classified information was divulged.  Perhaps Bolton felt he could do the same thing and cash in like Omarosa did when he left the Trump administration.  After all, Trump was firing senior staff at a disturbing rate.  Others resigned under acrimonious circumstances.  A controversial figure like Bolton must have known that he would probably suffer the same fate, so why not capitalize on the experience?  If that indeed was his plan, it would be very helpful to have a precise record of his White House interactions with the president and others.

Assuming that Bolton did indeed record the conversations he was privy to as a senior government official, he must have thought the risk of getting caught surreptitiously recording every detail of his White House experience was worth the financial reward that would accrue to him after he left office.  As it turned out, Bolton was correct about the financial windfall that would come his way.  Simon and Schuster paid Bolton a two-million-dollar advance.  His book is already a massive best-seller.

Apparently, Bolton thinks that he is the smartest guy in the room … any room that he is in.  Bolton didn’t let the anticipated condemnation of his disloyalty as a trusted presidential advisor stand in his way.  He successfully figured out a way to facilitate a lucrative book deal, which monetized his experience in the Trump administration.  Bolton deflects any criticism that he profited from privileged presidential information by saying he was a patriot who tried to alert the country that President Trump was, in his view, a loose cannon whose staff was constantly in damage control mode.  Of course, that’s simply Bolton’s opinion, but such opinions are worth a lot of money if they appear in a scandalous book, especially if the book is released during an election year in the middle of a pandemic.

Needless to say, President Trump and many staffers, including Secretary of State Mike Pompeo and others, say Bolton is lying and the events he describes in his book didn’t happen.  Perhaps, Bolton’s perceived treachery can serve as a teachable moment.  Whether or not we agree with a sitting president or we simply don’t like him, it seems most of us can agree that any president should be able to conduct government business without fear that his consultations with advisors will be made public later by a former employee, who is motivated by greed, revenge, or anything else.

Why would any president trust his cabinet members and his advisors if everything he says and does can be published with impunity for the world to see while he is still in office?  It is particularly disturbing that a National Security Advisor would divulge, in searing detail, how foreign policy decisions are made by our leaders.

Meanwhile, John Bolton is laughing his way to bank and making his rounds on the talk shows with a shit-eating grin plastered across his face.