It’s great to work in a high-paying job, but what are the occupations with the highest growth over the next several years? This visualization focuses on the top 20 fastest growing job markets, letting you easily compare the top growing careers, how much money they make and the expected growth over the next decade. 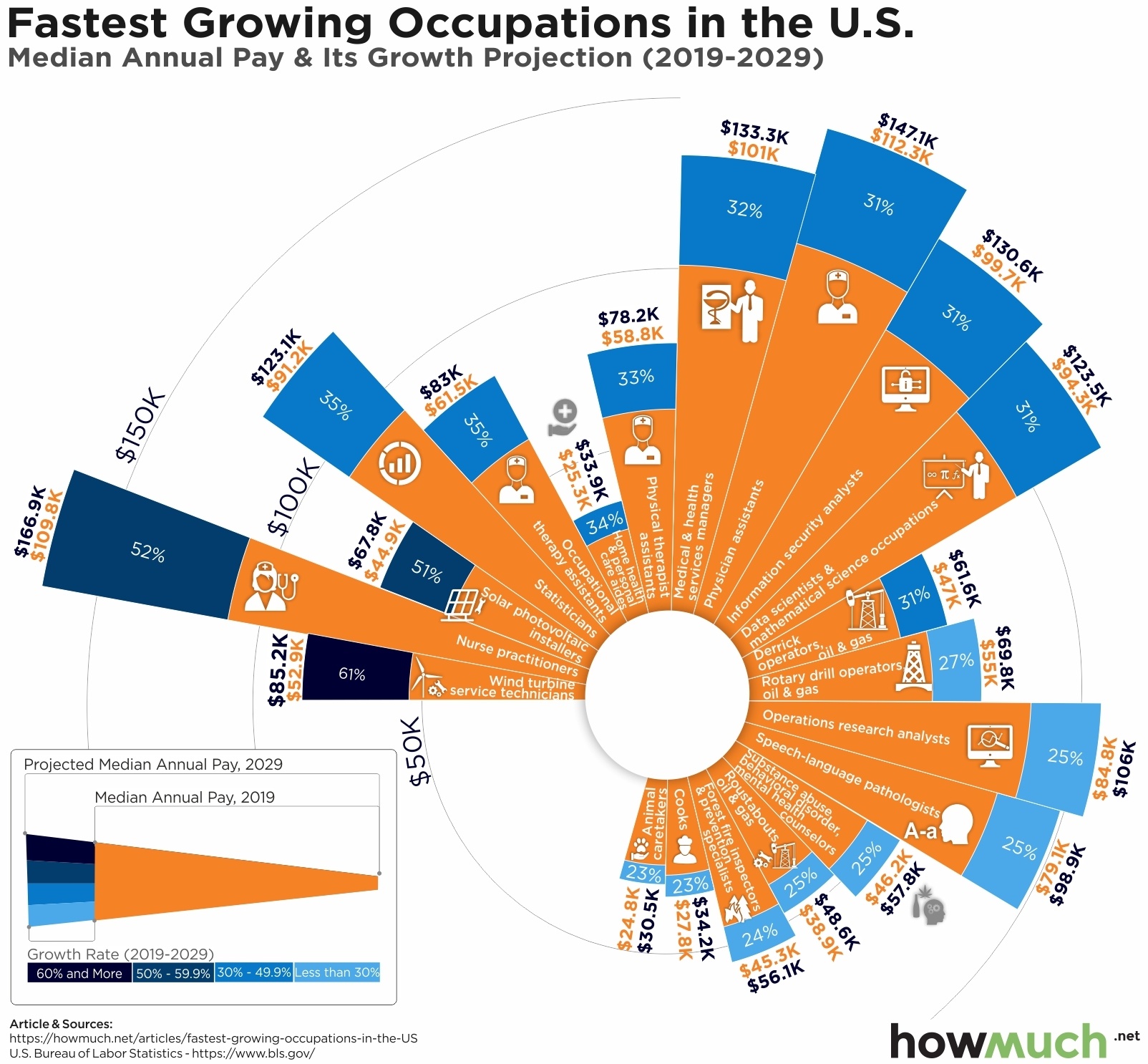 We found the original set of numbers for our visual at the U.S. Bureau of Labor Statistics. The BLS just updated their statistics with 2020 but are still showing 2019-2020 percentage increases. We decided to focus on 2019 salary numbers in orange and their 10-year projected growth rate from 2019 to 2029 in a blue sliding scale. We also ordered the ranking by the anticipated growth rate, showing the top 20 fastest growing careers in terms of salary in the coming decade.

Top Growing Careers in the U.S.

See also  Elon Musk "We should be much more worried about population collapse... UN projections are utter nonsense..."

According to researchers at the BLS, the single occupation with the fastest overall increase in compensation for the next decade will be wind turbine service technicians. President Biden recently set ambitious goals for the country to meet certain greenhouse gas emissions standards by 2030. This no doubt promises to increase the demand for wind turbines and their maintenance, potentially pushing wages for service technicians up from $52,910 to $85,185, or 61%. Solar photovoltaic installers are also anticipated to receive a payday, coming out of the next decade averaging about 51% more in salary.

But many of the occupations in our visual are starting the decade at a relatively low base number. A 34% increase sounds like a lot for home health & personal care aids, but they only take home about $25,280 to begin with. In terms of overall dollars, the occupation with the highest pay increase by the end of the decade will be nurse practitioners, who will see their income go up from $109,820 to $166,926. Physician assistants will likewise go up by $34,801 to $147,061 in median salary. Medical and health service managers are not far behind, expecting to see an increase of $32,314 to $133,294.

See also  The spurious global economic boom since 2009 is largely based on bubbles like this. It's happening virtually everywhere at this point.

There are a few things to keep in mind about salary growth projections over the long-term future. Nobody really knows what’s going to happen in the economy. Inflation could take off thanks to Joe Biden’s American Jobs Plan and radically change salaries for lots of different occupations. Biden’s capital gains tax plan could also reshape the U.S. economy in unexpected ways. COVID-19 has already changed employment in several U.S. industries. And most importantly, hot growth projections like this tend to attract more people into those jobs, which could slow down the anticipated increase in salaries. That being said, our visualization of the top 20 occupations with the fastest compensation growth all tend to be either directly tied to the green economy, or located in industries where it will be extremely hard for artificial intelligence to automate the work.

Do you think health care workers know they’re going to see some of the fastest salary growth in the coming years? Repost our article on social media and tag someone you know who is going to get big raises in the next decade.