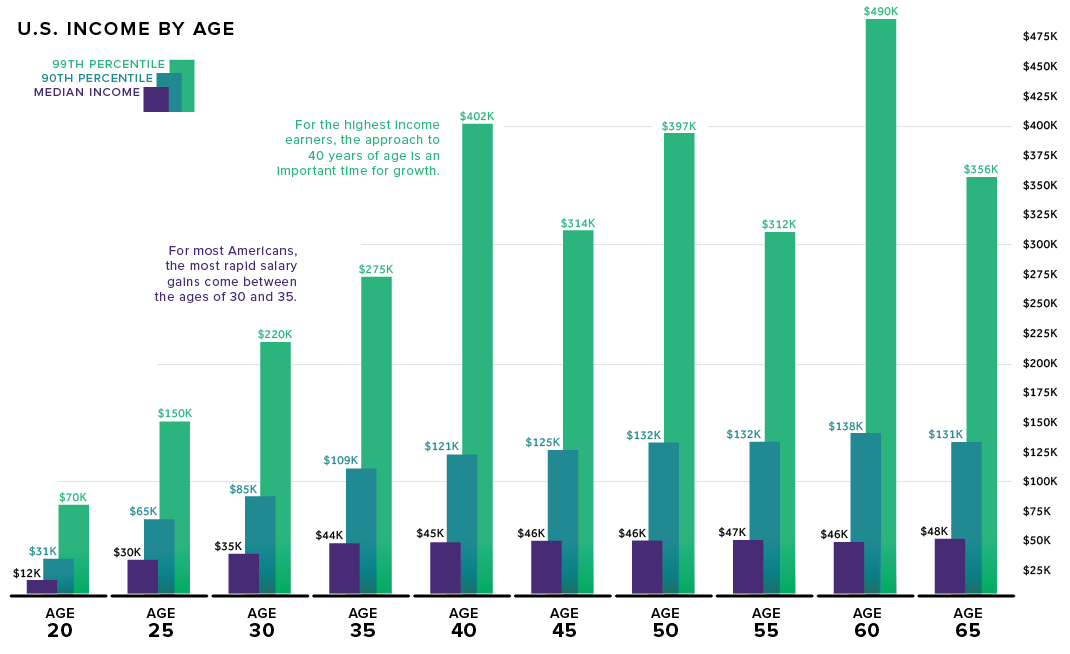 There are two commonly held beliefs around income and age:

How do these beliefs stand up to the actual income data? As it turns out, quite well.

Today’s data, from the IPUMS.org Current Population Survey, is a detailed look at income by age group.

In the age of LinkedIn bragging it’s no surprise that two-thirds of people who are being paid the market rate believe they’re actually underpaid.

For people just starting out in the workforce, there can be a lot of pressure to earn a higher salary, but as the data shows, only a tiny percentage of workers under the age of 25 surpass a salary of $50K. The majority of people in the work force make their greatest income strides between the ages of 30 and 35, with median income jumping by 26% during that short time-frame.

After the age of 35, the percentage of people earning $50K or more is surprisingly consistent until retirement age, hovering between 42% and 48%.

Making $100K per year won’t put you in the top 1% – you’ll need to earn $300K to join that club – however, it’s still enough to live comfortably in most places in America.

Approximately 21 million people in the U.S. workforce earn over $100K. Here’s how they break down by age.

READ  "Joe Biden's radical plan to implement the largest tax hike in American history is a massive giveaway to China, and many other countries--This tax hike is a classic globalist betrayal bye Joe Biden and his friends" -- Statement by Donald J. Trump Interestingly, the percentage of Americans earning $100K or more jumps from 2% to 12%, and moves very little after that. Put another way, it’s rare for anyone in their 20s to earn over $100K, but many people who hit that threshold do so by the time they turn 40.

Much like those earning $50K or more, the percentage of $100K+ earners stays fairly consistent until retirement, peaking at age 66.

Individual salary situations will vary widely, of course, but it’s interesting to zoom out at the big picture of income in America.