A $90 billion wave of maturing commercial mortgages, leftover debt from the 2007 lending boom, is revealing the weaker links in the U.S. real estate market. “There are a lot more problem loans out there than people think,” said Ray Potter, founder of R3 Funding, a New York-based firm that arranges financing for landlords and investors. “We’re not going to see a huge crash, but there will be more losses than people are expecting.” 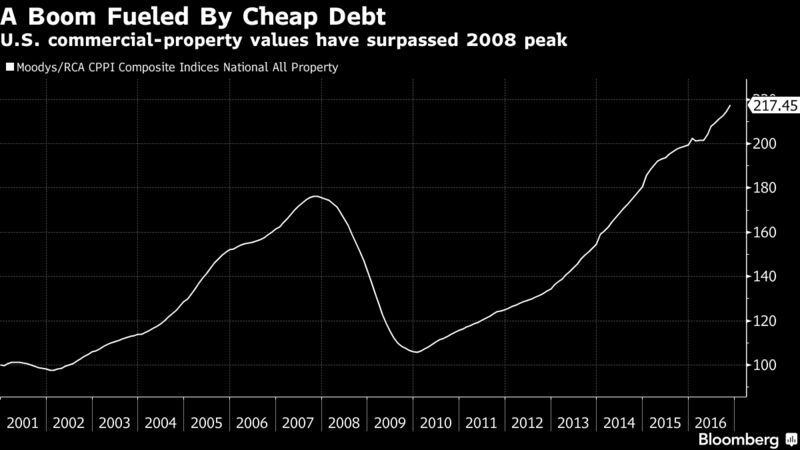 Banks sold a record $250 billion of commercial mortgage-backed securities to institutional investors in 2007, and lax lending standards enabled landlords across the U.S. to saddle buildings with large piles of debt. When credit markets froze the following year, Wall Street analysts warned of a cataclysm, with $700 billion of commercial mortgages set to mature over the next decade.
It’s getting tougher for property-owners who count on on borrowed cash to find new loans to pay off the old ones, leading to forecasts for higher delinquencies. Lenders have become particular about which buildings they will fund, worried about overheated prices for properties from hotels to shopping malls, and record values for office buildings in cities such as New York. Rising interest rates and regulatory restrictions for banks also are increasing the chances that borrowers will come about short when it’s time to refinance.
“At the depths of the panic, it was just that: panic,” said Manus Clancy, a managing director at Trepp LLC, a firm that tracks commercial-mortgage debt. “That made people’s future expectations extremely bearish. Extremely low interest rates over the last four or five years have forgiven a lot of sins.”
Credit for property owners has once again become scarce in some pockets. Borrowing costs jumped following the surprise election of President Donald Trump, and Wall Street firms are being more careful as new regulations kick in requiring them to hold a stake in the mortgages they sell off. Other lenders are scaling back on commitments to property types and locations where problems have gotten harder to ignore.
S&P analysts are predicting that about 13 percent of real estate loans coming due will ultimately default, up from 8 percent over the past two years, according to Dennis Sim, a researcher at the firm. That’s their base case, but the default rate could be higher, he said. “There are a lot of headwinds currently — with the interest-rate increase, with the new administration coming in, and also risk retention,” Sim said. “Those three wild-card factors could also play a role in how some of the better-performing loans are able to refinance or not.”

See also  Beat down in Venice Beach. This guy destroyed property of vendors. He got what he deserved.
See also  Cheap Mortgages: The Fed's Plan to Drive Mortgage Rates Even Lower
1,184 views