How is this not considered treason!!? 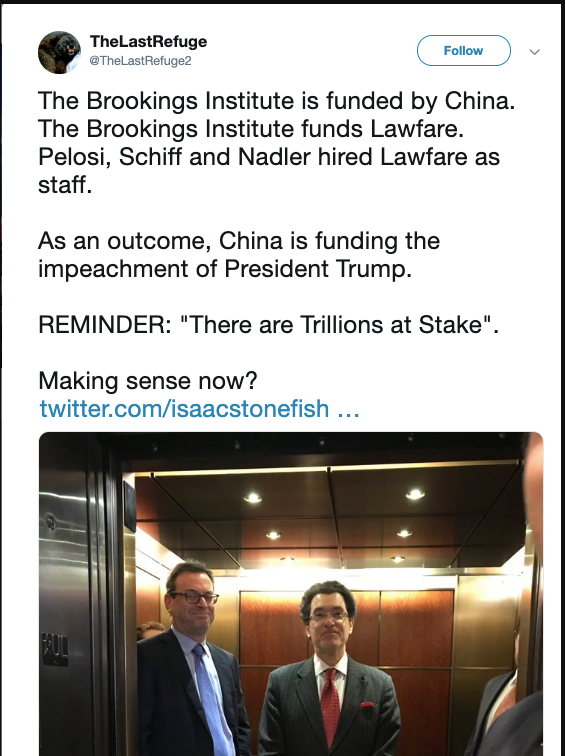 Exclusive: Brookings has a Huawei problem. Between July 2016 and June 2018, Huawei gave at least $300,000 to Brookings, via FutureWei Technologies, Inc., a U.S.-based subsidiary of the company. (thread). t.co/p0oZdJJ9IH

Brookings has a Chinese arm? www.brookings.edu/center/john-l-thornton-china-center/

Another note is that Huawei is really not independant from the Government. But other than that, here’s the FreeBeacon talking about the Communst party infiltrating American Think Tanks: freebeacon.com/national-security/chinese-communist-party-funds-washington-think-tanks/

The funding for Johns Hopkins came from Tung’s non-profit group in Hong Kong, the China-U.S. Exchange Foundation, which is a registered Chinese agent.

In addition to Johns Hopkins, other think tanks linked to China and influential in American policy circles include the Brookings Institution, Atlantic Council, Center for American Progress, EastWest Institute, Carter Center, and the Carnegie Endowment for International Peace.

Reading that article shows that it’s not just Huawei. hmmmmmmmm

REALCLEARINVESTIGATIONS: How ‘Whistleblower’ May Be Outed: Ties to Biden, Brennan, Schiff’s Staff, Etc. If they don’t want you to know who it is, it’s because if you did know who it is, you wouldn’t be impressed.