China Warns on Debt, But Bond Buyers Shrug
National policy makers nowadays have prioritized reducing risk in the financial system, and part of that involves telling local authorities to let LGFVs stand on their own, without the backing of the state. Some have listened — for example, Moody’s Investors Service and Fitch Ratings have said debt repayment failures are becoming more likely.

Who’s not listening? Bond buyers. The yield premium on LGFV five-year notes rated AA — a typical grade — over government securities has dropped 61 basis points from a June high, to 163 basis points, according to data compiled by ChinaBond. That means they’ve broadly kept pace with the rest of the corporate-debt market, outperforming during a time when government bonds have tumbled, sending yields to three-year highs….
Investors have yet to see eye-opening defaults, analyst says. Risk is continued capital misallocation: BNP Asset Management 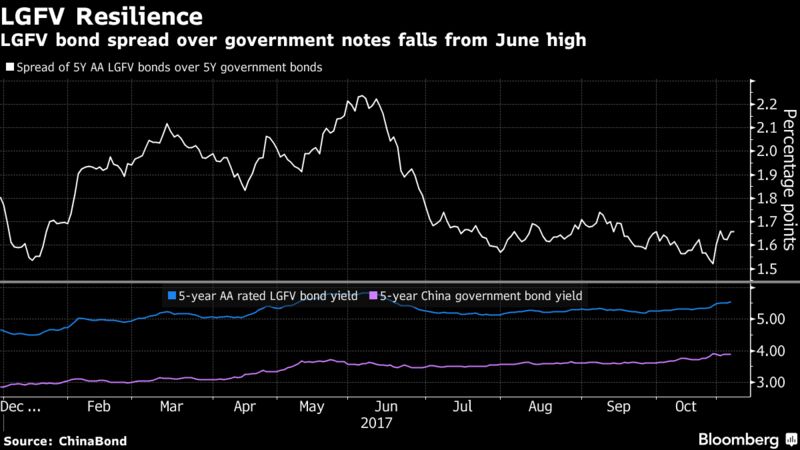 “Deleveraging is at the top of Xi’s agenda and LGFVs are part of it,” said Chi Lo, greater China senior economist at BNP Paribas Asset Management in Hong Kong, referring to President Xi Jinping, who reiterated the need to reduce financial risks at last month’s Communist Party congress. “If the issue isn’t solved, the capital mis-allocation problem will remain, and the excess capacity problem won’t go away.”
www.bloomberg.com/news/articles/2017-11-07/china-s-warnings-ignored-by-bond-buyers-loving-local-debt-units?utm_content=markets&utm_campaign=socialflow-organic&utm_source=twitter&utm_medium=social&cmpid%3D=socialflow-twitter-markets

Here are some of the other points Zhou made:

On risks and regulation

www.bloomberg.com/news/articles/2017-11-08/trump-scraps-surprise-dmz-visit-amid-heavy-fog-in-south-korea
China Traders Take on Risk as Margin Debt Tops One Trillion Yuan
Outstanding margin debt on local bourses climbed above 1 trillion yuan ($151 billion) on Monday for the first time since January 2016 as the Shanghai Composite Index rallied 12 percent from this year’s low in May. That’s helping lifting sentiment toward brokerages, with Citic Securities Co. rising to a one-month high on Wednesday.

Still, with the government emphasizing the need for stability and reduced leverage in the financial sector, any sharp increase in borrowed money is unlikely. Margin debt — which helped fuel the boom to bust two years ago — is still less than half of its 2015 peak, and has barely increased as percentage of market capitalization this year. New investors have also not rushed in.