by Daniel Carter
The stock market has surprised many this year by continuing to skyrocket to new all-time highs. Consumer and investor sentiment is high, the unemployment rate is low and Wall Street is excited for potential corporate tax cuts. Currently, things could not be going much better. However, I cannot help but notice that the stock market resembles the overvalued and excessively bullish conditions that led to modern history’s most severe stock market crash from 1929 to 1932.
Extremely Overvalued
One of the most striking similarities between today’s market and the market of 1929 is the extreme overvaluation of stocks. One of the most widely used metrics for measuring the valuation of stocks is the Cyclically Adjusted Price-to-Earnings Ratio (CAPE), which is shown below. It has been an excellent predictor of long-run returns. A high CAPE means low returns over the next 10 years and vice versa.

As you can see, today’s stock valuations are actually higher than they were in 1929. The only time valuations were higher was in the dot com bubble, where companies with no earnings were receiving insanely high valuations.
Investing With Margin
One of the things that made the crash of 1929 so severe was the unreasonable amount of margin investing. This is when an investor borrows money to buy stocks. When the market began to crash in 1929, prices fell below loan amounts. Brokers then quickly demanded that borrowers sell so that they could limit loses on the loans. The selling put more downward pressure on stocks which triggered even more panic selling to cover the loans. Today’s market is yet again made up of investors using excessive amounts of margin. The use of margin is now much higher than it was at the peak of the 2008 bubble. 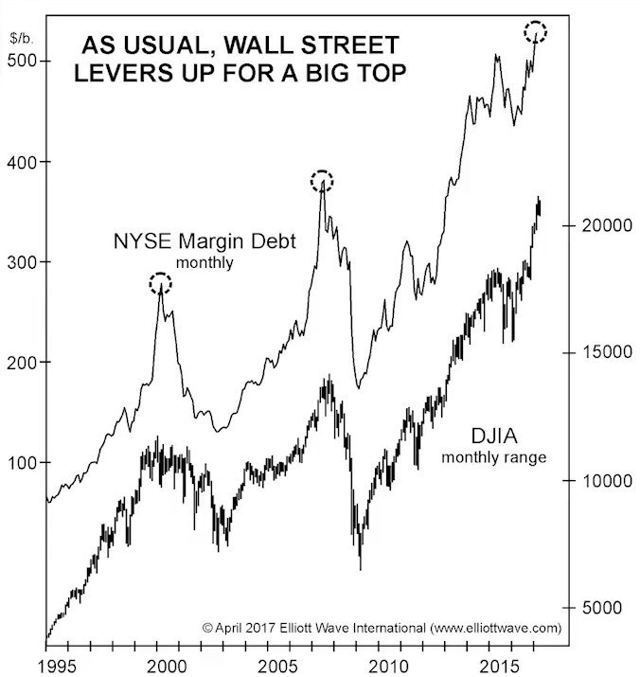 Soft data like consumer sentiment is soaring, but hard economic data tells a different story. Before the crash of 1929, people were very confident that the economy was doing well. However, the agriculture industry was noticeably lagging the rest of the economy. The industry was suffering from overproduction, which led to low prices and low revenue. The agriculture industry’s struggles eventually caught up to the rest of the economy.
Today, we can see similar struggles with the automobile and retail industries. The automobile industry is now suffering from overproduction and decreasing demand. This can be seen from the huge number of unsold cars parked throughout the country.

The retail industry is now dealing with a similar issue. A rapidly changing retail environment has pushed many large retail chains to the brink of bankruptcy. The large decrease in demand has left many companies with much more space than they need. As a result, we are seeing a rapidly shrinking industry. Retail store closings are now largely out pacing store openings.

Because hard economic data has been so divergent from soft economic data — like it was in 1929– we may be massively surprised once again when the stock market tanks.
Excessive Bullishness
Market tops are usually accompanied by an exorbitant amount of optimism. John Maynard Keynes called this phenomenon Animal Spirits. Even though an economy’s fundamentals may be deteriorating, the perception of the masses can still push stock prices up to astronomical levels. This explains why the stock market in 1929 was still soaring even though the agriculture industry was doing poorly. Literally months before the crash, economist Irving Fisher said this:

Today, we see the same kind of mentality. Just a few months ago, the head of the Federal Reserve, Janet Yellen, said this:

Yellen is not the only financial professional making outlandish statements. Chief Investment Strategist, Jim Paulsen, had this to say about the current bull market:

These statements are truly absurd. Consider the chart below of 500 years of stock prices. Not once has a bull market not ended or even lasted much longer than the current bull market.

These so-called experts are selling absurdities, but even more shocking, people are buying them. This shows you the level of bullishness in today’s market; a level that usually results in a major market crash.
Conclusion
Stocks may be crushing records now, but this run won’t last much longer. Extreme valuations, margin debt, struggling sectors of the economy and irrational bullishness will eventually catch up to stock prices like it did in 1929. Don’t underestimate these conditions pushing stocks even higher, but even more seriously, don’t underestimate the severity of the next crash.