Skip to content ﻿
Sharing is Caring!
BY JOHN MAULDIN

There’s no end in sight to the trade war between the US and China.

Beijing has many tricks up its sleeve. But China’s labor market has its own dynamic.

The first signs of Chinese economic weakness are showing up.

From my friends at Gavekal Dragonomics, written by Ernan Cui:

China’s job market is proving to be an early casualty of the US-China trade conflict. Layoffs in manufacturing accelerated over the second half of 2018 as US tariffs fell into place, and job losses have now matched the pace seen during the economic slowdown of 2015-6. But the situation is arguably worse this time, as the service-sector employers that previously absorbed many laid-off workers are now being squeezed by tighter regulations. Government officials are trying to adjust and soften policies to help employment, but the outlook for household income and consumer spending in China in 2019 is clearly worsening.

Consumer spending had already slowed in 2018, but most of the deterioration came from a decline in auto sales. [Which still total 27 million cars sold.] That was largely the result of the end of several years of favorable policies that had front-loaded vehicle purchases; spending on services and other consumer goods actually held up fairly well. But China looks to be headed for a more broad-based slowdown in consumer spending in at least the first half of 2019. The employment components of the PMI surveys, both for manufacturing and non-manufacturing sectors, started to deteriorate sharply in September. These are decent leading indicators of household income growth (see chart), so a further slowdown in income and consumption in the next couple of quarters is almost guaranteed. 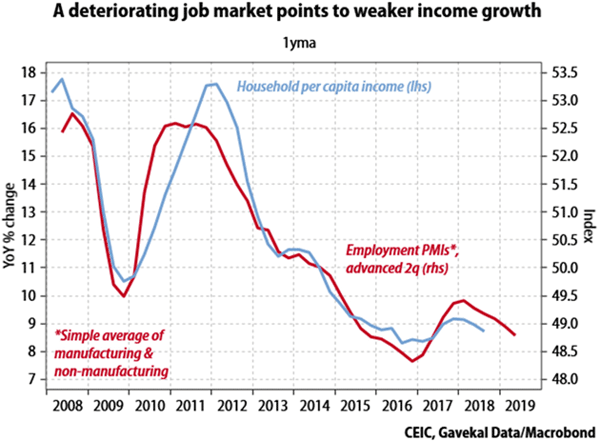 An Alternative Source of Data

Now, we should note that Chinese economic data is questionable, to put it mildly.

See also  If you can’t get sustained inflation even with $10 trillion in intervention then the organic economy is in a truly sorry state.
See also  MAYBE FUNDING CHINESE VIRAL RESEARCH WAS ALWAYS A TERRIBLE IDEA:

The last thing Beijing wants is to give the public grim data proving how hopeless their job hunting or incomes expectations are.

The good news is that we have alternative sources with on-the-ground presence and access to non-government data.

Gavekal in their broad-based research found an amazing data point.

The graph below shows an index of Chinese internet searches for the word “layoff.” Notice where it is now compared to 2008 and other recent economic slowdowns. 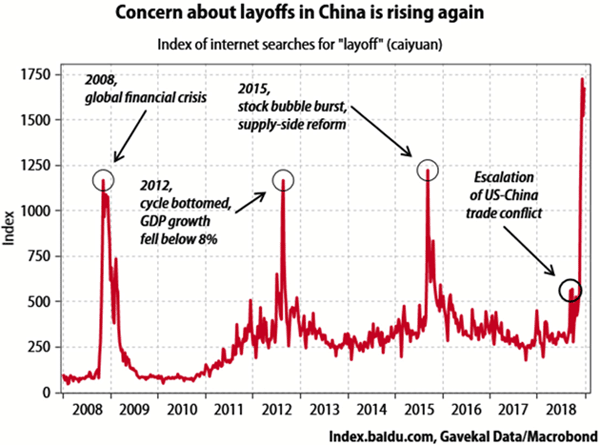 Now, this doesn’t mean Chinese employers are actually conducting layoffs. It means people are looking for information on the topic. And I think it’s fair to call that a sign of worry.

What is causing this concern? Do Chinese workers see something that bullish Western analysts are missing?