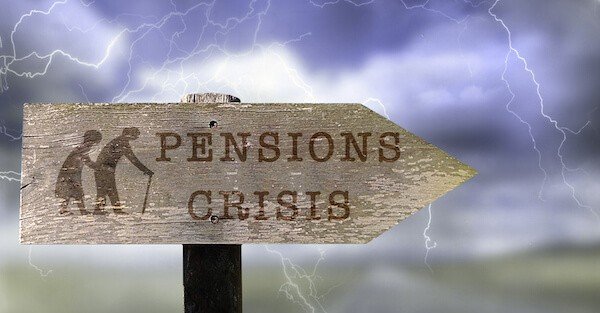 The US pension system has gotten so bad, Congress is actually planning for its failure.

As the government was working on the recent, new budget deal and subsequent boost in government spending, Congress quietly snuck in a provision that forms a committee which would use federal funds to bail out as many as 200 “multiemployer” pension plans – where employers and labor unions jointly provide retirement benefits to employees.

As is often the case, this rescue “plan” is too little too late. The US pension system is beyond repair. And if you’re depending on pension income to carry you through retirement, it’s time to consider a Plan B.

Before explaining how dire the situation actually is, let’s take a step back…

Pensions are simply giant pools of capital used to pay out retirement benefits to workers.

Typically, employers and employees contribute a percentage of the employees’ salary to a pension throughout his or her career. Then, upon retirement, the pension is supposed to pay a fixed, monthly amount to the retiree.

There are both government and corporate pension plans.

Boston College estimates the nation’s 1,400 multiemployer plans (corporate) are facing a $553 billion shortfall. And around one-quarter of those are in the “red zone,” meaning they’ll likely go broke in the next decade or so.

But Congress’ committee, assuming it works, wouldn’t even rescue the red zone plans, much less the remaining 1,200.

And it doesn’t even begin to address the real problem – the $7 trillion funding gap faced by the government’s own pensions.

Congress is stepping in because the Pension Benefit Guaranty Corporation (PBGC) – the pension equivalent to the Federal Deposit Insurance Corporation (FDIC) – is completely insolvent.

Like the FDIC, the PBGC is an insurance program funded by premiums paid by its participating members (pensions). Its entire income is made up of premiums collected and the investment income it earns on those premiums.

So, as the markets crash, not only will the PBGC’s portfolio get slaughtered… so will those of the pensions it guarantees (which will then require more funds). And as these pensions fail, the PBGC will collect less in premiums. It’s a vicious circle.

But things are plenty bad already.

The PBGC, which only covers corporate pensions, had a $76 billion deficit in 2017. It has total assets of $108 billion on its books compared to potential loss exposure of more than $250 billion.

By its own estimation, its fund to cover multiemployer pensions (which makes up $65 billion of the deficit) will be insolvent by 2025.

Pensions are in such bad shape today for the simple reason that investment returns are too low. And pensions can’t cover their future obligations.

Pension fund managers invest in assets like stocks, bonds and real estate in hopes of generating a safe return.

Most funds require a 7%-8% return in order to meet their future liabilities.

But with interest rates near record lows, these funds are having to take on more risk in order to meet their minimum return requirements. They’ve reduced their bond allocations and started buying more stocks, private equity and other riskier assets.

Some funds, like Hawaii’s pension fund, went even further and dabbled in the incredibly risky strategy of selling put options. By selling a put, you collect a small premium if markets stay calm or rise. But you’re exposed to unlimited losses if markets crash – like they did when the Dow fell 2,400 points in a week last month.

At the end of last year, equities made up nearly 54% of public pension fund portfolios. The $209 billion New York State Common Retirement Fund has over 58% of its assets in stocks. Kentucky’s $20 billion pension for teachers is 62% in stocks.

These giant funds, which are supposed to pay for public and private employees in retirement, are piling into stocks at record high valuations. And when the volatility hits, it will be devastating.

Pension funds should never experience that kind of volatility. But the current macro environment is forcing them to make dumb decisions in hopes of generating a minimum return.

Luckily, if you’re a smaller investor, you still have plenty of solid investment options available – even if you’re investing with tens of millions of dollars.

You can also invest in super-safe stocks trading below their net cash, like Sovereign Man’s Chief Investment Strategist, Tim Staermose, does in his service, The 4th Pillar.

But these strategies get more difficult if you have hundreds of billions of dollars.

So these pension funds are forced to buy stocks and real estate at all-time highs. It stretches valuations and creates huge risk.

Still, pension fund allocations to equities are near all-time highs.

So, ask yourself, what will happen to your retirement if the stock market falls just 20%? What about 50%?

There’s zero chance these funds will be able to pay out retirement benefits. They’re taking huge risks at all-time highs and they have zero downside protection (the PGBC is broke).

It’s smart to consider some other options like a self-directed IRA, solo 401(k) or a SEP IRA – which allow you significant latitude in making better, safer and stronger investments.

Plus, they allow you to put more money away toward retirement before tax. And there’s no downside to that.

You’ve got make long-term plans for retirement. The pension system is broken. So the time to take action is now.