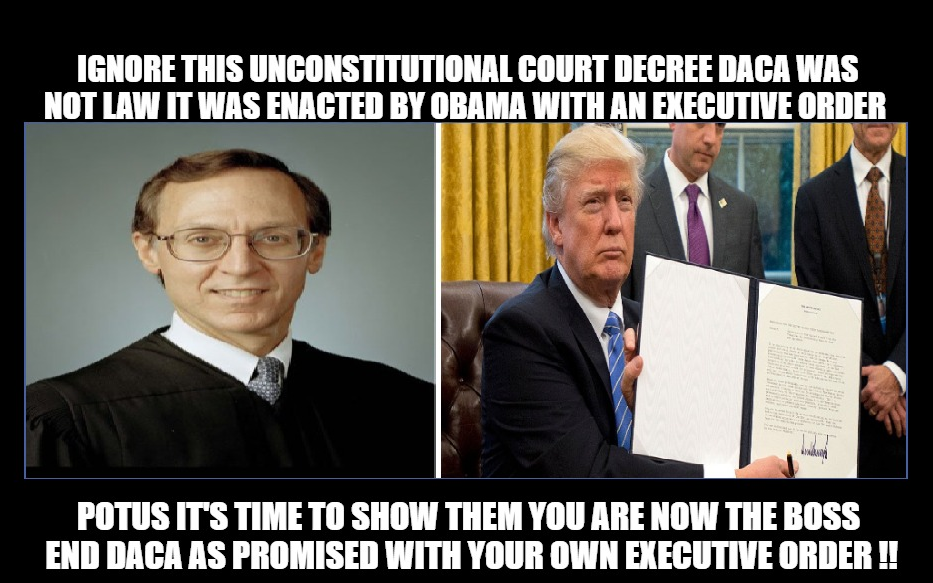 Trump’s administration received a serious setback on Wednesday, following an activist Federal Judge’s decision, which forces the Department of Homeland Security to resume the Dreamers Program, an Obama-era (illegal/unconstitutional) executive order that protects hundreds of thousands of illegal immigrants from deportation. More precisely, U.S. District Judge John D. Bates for the District of Columbia said on Wednesday that the White House was “arbitrary and capricious” with regard to trying to end Barack Obama’s Deferred Action for Childhood Arrivals program, and basically forced the DHS to resume it, while claiming the  Department of Homeland Security had failed to explain him (the judge that is) why DACA is unlawful. Therefore, since Judge John D. Bates seems to believe that DACA is completely “kosher”, the Trump administration’s efforts to end DACA must be set aside/stopped, and DHS has 90 days to, let me quote, “better explain its view” on why DACA is illegal/unconstitutional.

Now, the question to be asked is how can a Federal Judge uphold an illegal decree by former President Barack Obama? When will the President become President and not a real estate agent? He is getting terrible advice from his attorneys. His attorneys are treating him like a real estate agent, not like the President of the United States, which is one of the co equal branches of government with the congress. The judicial branch is not a co equal branch. It never was. The founders knew how corrupt judges could become. The President is (and always was) intended to be a check on the power of the judges. The US Congress was (and still is) useless in that respect. When is the President going to realize that he has more power than any judge? He does not have to follow any judge’s order, even if they are Supreme Court judges. He is destroying our Constitution by allowing judges to overrule his lawful orders. He should be arresting them, not appealing to them.

READ  FED DOWN! Federal Reserve Payment Crash Is A Sign For Collapse Of Banking System

The President does not have to follow the orders of any Judge. President Trump does not have to follow that judge’s order and there is nothing he can do about it. If the judge tries to carry out his order, the President could and should have him arrested for subversion of the Constitution. The President is the branch that is supposed to stop judges from becoming tyrants. President Trump is undermining our Constitution by giving any credibility to that judge’s order. It is insanity to believe that a judge can order the President of the United States to do anything. That would make him more powerful than the President, which is exactly what the Founding Fathers did not want.

POTUS tried to use DACA as a bargaining chip for the wall by only rescinding it instead of ending it for good with his own Executive Order, and he lost. He must learn you can’t make deals with the devil (and the devil includes both Democrats and RINOS).The Democrats cared less about the illegal Dreamers then Trump thought, and RINOs want them to stay for their big business donors.

In the process, Trump alienated some of his base. To be perfectly honest, I still support Donald Trump, but it really ticked me off that he was willing to let the Dreamers stay after promising repeatedly they would have to go, and there would be no amnesty. But, make no mistake: Trump could still end DACA today by issuing his own Executive Order. I hope they have finally made him mad enough that he does just that. It would make his base very happy, and he would show them he has more power than they think. He needs to just revoke the entire DACA executive order. Not try to limit or tweak with it.

The original order was grossly unconstitutional in the sense that it was an attempt of just creating law by executive fiat. Trump can undo any order Obama put in place. The orders are not laws, but management instructions to the executive branch, which is entirely under his control, with the exception of a very small number of things that Congress has oversight over.