Copper prices hit their lowest levels in 13 months on Wednesday and entered a bear market, potentially signaling an economic slowdown is happening around the world.

The metal’s futures for September delivery fell to as low as $2.552 per pound on Wednesday before trading around $2.568, down 4.3 percent. The last time copper traded at such low prices was June, 25, 2017. The metal is also trading more than 20 percent below its 52-week high, officially entering bear market territory. 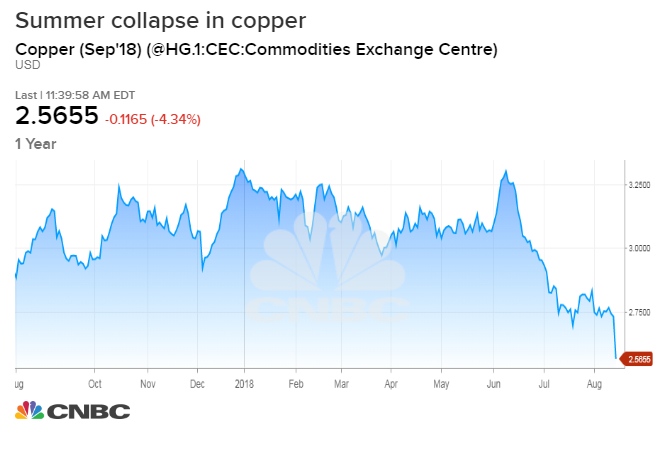 “Dr. Copper,” as it is sometimes referred to by economists and finance experts, is often seen as a leading indicator of future economic trends since it is utilized in a number of different sectors. Copper is used in home construction and consumer products, as well as manufacturing.

Earlier this week, China reported weaker-than-expected industrial production and retail sales growth, raising worries that the second-largest economy in the world could be headed for a slowdown. Meanwhile, the U.S. dollar rose 0.2 percent on Wednesday to trade around its highest levels in more than a year. Copper is traded in dollars, meaning a stronger greenback makes it harder for investors outside the U.S. to buy it.

Copper also fell after the union for Chile’s Escondida mine, the largest copper mine in the world, said Tuesday that it was closer to averting a planned strike. The union and the company reported early Tuesday that they agreed to extend government-mediated negotiations for at least one day, in a last-minute effort to avert the strike.

“Now that the supply risk is abating a bit it’s giving the bears more to go on here,” McKay said.

The metal has been under pressure this year, falling more than 22 percent, amid concerns that rising trade tensions could strain global supply chains. The U.S. has already slapped tariffs on Chinese, European and Mexican goods. Mexico, China and the European Union have retaliated with levies of their own.

“New lows in copper are never good for the outlook for risk as-sets and the current price action in the industrial metals market is looking more and more like it did in the summer of 2015 when China concerns eventually triggered a massive wave of volatility,” Essaye said. “So, while the macro backdrop remains calm and investor sentiment appears more and more complacent every-day, copper continues to flash a warning sign that another spike in volatility may be just around the corner.”

Equities fell sharply Wednesday, with the Dow Jones Industrial Average briefly falling more than 300 points while the S&P 500 and Nasdaq composite both dropped more than 1 percent. The Cboe Volatility Index, widely considered the best fear gauge in the market, rose more than 25 percent to 16.65.

US stocks ignore the copper decline

In about 24hrs — Copper has plunged almost 5% — What is US Fin media not telling You?? Maybe one should look to China. pic.twitter.com/CH6Kpv9Ioa