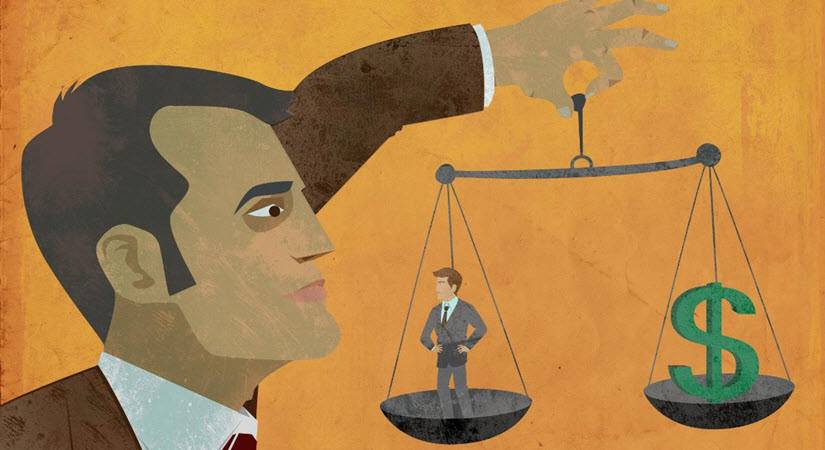 The U.S. economy is at a fork in the road.

One route leads to the return of market fundamentals and sane stock valuations, at the cost of a historic market correction.

The other route leads to runaway hyperinflation that eats up the debt almost as fast as it devours the dollar’s buying power. That would likely cause the dollar to lose its hegemony as global reserve currency and bring about a simultaneous market collapse.

Here’s where we are, and where we might be going…

How did we get here?

For the most part, through Fed interventions that suppressed interest rates for the last 13 years, creating artificial demand for U.S. IOUs in the form of bonds, and generally maintaining an “easy money” policy. (And let’s not forget the hundreds of millions of stimulus checks, unemployment extensions, fraud-riddled Payroll Protection Program and the other boondoggles associated with the pandemic lockdown.)

Now, all this works great. For a while. The Fed came out of the Great Recession with $2 trillion on its balance sheet. Today, over a decade later, its balance sheet sits at $8 trillion. And climbing.

Let’s reiterate: This works great. For a while.

Junk-rated companies are able to borrow massive amounts of money (and spend it all on bitcoin, sure, why not?) at absurdly low rates, only 3% over the “safe rate” offered by Treasurys. Everyone who owns stocks made money, at least on paper. We’ve already watched stock valuations climb into the stratosphere as lockdown-addled day-traders took their stimmies to the Robinhood casino to play with the /WallStreetBets and AMC apes. We’ve seen home values skyrocket (15% annually in April 2021 and currently about 30% higher than the peak of the housing bubble).

Even dogecoin, the cryptocurrency that started as a joke, racked up over 14,000% gains.

That’s what we call an everything bubble.

The End of Market Fundamentals

“What is anything worth,” DealBook asked today. Anything! Is! Worth! What! People! Will! Pay! For! It! I have no idea, man.

It’s all fun and games. For a while.

Until we start to see the less immediate consequences. We’re beginning to see the only red flag no one, not even the Fed, can ignore…

Turns out you can’t just pump $4 trillion into the economy without consequences.

In this case, 40-year record-high inflation. Or, as Wolf Richter editorializes,

There are whole generations who never experienced this type of inflation, this type of destruction of the dollar’s purchasing power.

Inflation at 5% may not sound terrible to you (especially if you remember the Carter administration). Regular readers, however, will remember that even transitory inflation permanently reduces your buying power. And that by the time technical hyperinflation sets in, it’s already too late.

Here’s what the Fed can do

You’d expect the Fed to stomp on the embers of inflation before it has the chance to really take hold and turn into a dangerous brushfire.

Here’s the problem: the markets have gotten addicted to easy money. When the Fed recently discussed the possibility of maybe someday beginning to nudge interest rates up just a tiny bit, there was a big sell-off in stocks. The Plunge Protection Team was called out and “contained” the damage by basically promising Wall Street they’d never, ever be so rude as to make borrowing money more expensive without several years of warning.

We’ve said it before, and we’ll say it again: Bernanke taught Wall Street that stock prices are more important than inflation or fiscal discipline. Powell has done the same thing, only with much more money.

When the Fed does raise rates, the immediate reaction is stocks go down. That’s what the media talk about. There’s a number of real, serious, systemic results that aren’t as immediate but are much more painful:

On the other hand, by keeping interest rates as close to zero as possible, the Fed:

That last bullet point is most interesting, considering the recent debt ceiling news…

Why? Because the government’s out of money. Again. Without the ability to borrow more money (by selling more bonds), she said the U.S. could start defaulting on payments in August.

Now, Chairman Jerome Powell of the Federal Reserve faces a tough choice. He can:

Either Powell will bow to inflation pressure and raise interest rates, tanking the stock market. Or he’ll keep pouring drinks to fuel the stock market party, letting inflation blaze higher and higher. Maybe there is no choice, and a historic crash is what it will take to bring the Fed to their senses.

One of these two outcomes seems inevitable in the near term. With that in mind, what’s a sober, clear-eyed investor to do?

Regardless, it’s a good idea for you to review your savings and make sure you’ll be well-insulated from both a market meltdown and an inflation bonfire. Protecting your retirement and your future from the Fed’s follies should be a high priority.

That means enjoying the benefits of diversification. Change the allocation of your savings as you see fit, consider armoring your nest egg with physical precious metals. Gold has a reliable track record of holding its value relative to inflation, and is the first thing everyone else wants when stock markets drop. If you believe (like we do) that either hyperinflation or a market collapse are inevitable in the short term, gold has your back either way.