To reach the annualized $1.74 trillion this year, second-half issuance needs to maintain the tempo of the first half – in other words, issue another $868.1 billion.  At least going by what transpired last year, this looks unlikely.
In 2016, second-half issuance declined 17.7 percent over the first to $688.1 billion.  Simplistically, if 2H this year follows the same pattern, issuance would be $714.4 billion.  This would still amount to $1.58 trillion – a new record.
One crucial difference this year is how HY is behaving, which jumped 26.5 percent in 1H over last year.  Last year was the third consecutive year HY shrunk (Chart 1).  This year, if the 1H momentum carries into the second, this trend will be broken. 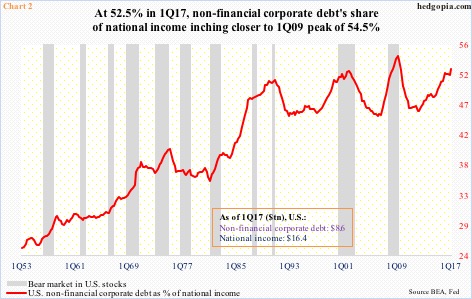 Yellen Goes on Record: The Fed’s Pulling the Plug This Year…”We’re going to have the 3rd and worst crisis in 20 years.”
The Fed keeps ringing bells to signal the top, but the markets aren’t listening.
Janet Yellen is set to present the Fed’s Monetary Report to Congress this week. Her remarks have already been posted online.
The results aren’t pretty.
Valuation pressures across a range of assets and several indicators of investor risk appetite have increased further since mid-February…
The Committee currently expects to begin implementing the balance sheet normalization program this year provided that the economy evolves broadly as anticipated…
Source: Federal Reserve
Firstly, Yellen is CLEARLY warning that the Fed sees bubbles in the system. For a Fed Chair to specifically cite “valuation pressures” in the markets is simply incredible… particularly when you consider that the Fed has been actively propping up stocks for the better part of eight years.
Secondly, Yellen reiterates the Fed’s intention to begin normalizing its balance sheet this year. This is an absolute game changer for the markets as it marks the first time in a DECADE that that FEd will be actively withdrawing liquidity from the system.
…

A Crash is coming…
The Fed Is Getting Ready To Pull The Plug On The Markets, This Is A Game Changer


See also  Armstrong: Democrats Scorched Earth Policy
German Secretary Economics warns that low to negative interest rates do not work, they have failed. Department stores are being hammered they are trying everything to bring in the customers. A stock market tsunami is getting ready to go off, and nobody is really noticing the storm warnings. The Fed is pulling the plug on the entire market, they are bringing down the economy. BofA points out why the Fed is doing this at this point, in not so many words the Fed is worried that the system will come down and they will lose control, they want it to come down on their terms.
“… A Recession Has Always Followed”: Is This The Real Reason The Fed Is Suddenly Panicking
Why is the Fed so desperate to raise rates and tighten financial conditions? Why has the Fed shifted from a dovish to a hawkish bias?”
That is the question on every trader’s, analyst’s and economist’s mind in the past month. Is it because the Fed is suddenly worried it has inflated another massive equity bubble (major banks now openly warn their clients the market is in frothy territory, if not inside a bubble), or is the Fed just worried that it will fall too far behind the curve and be unable to regain control of the economy once inflation spikes, without creating a recession (in what will soon be the second longest, if weakest, economic expansion of all time).
This is also what BofA’s chief economist Ethan Harris tried to answer over the weekend, when he recalled that while from 2013 to 2016 the Fed seemed to have a “dovish bias” signaling a slow exit from super easy monetary policy, but pausing at any sign of trouble, this year the Fed appears to have shifted to a “hawkish bias:” signaling a slow exit, but only pausing if the outlook changes significantly. He says that this was most evident when the Fed hiked rates and signaled balance shrinkage at its June meeting despite weak growth and inflation data.
Why the change of Fed feathers? In BofA’s view, three factors are at play, in increasing order of importance.
First, the Fed is worried a bit about financial stability and overheating markets. However, the bank puts a relatively low weight on this argument, as Chair Yellen and her allies have repeatedly underscored the idea that macro prudential policy is the first line of defense against asset bubbles and monetary policy is a distant “Plan B”, although to this we can add that macroprudential policy has yet to demonstrate its effectiveness in preventing even one asset bubble.
The second reason for the Fed’s hawkish turn is that it is probably encouraged by how easily the markets have absorbed its forecasts. Since the start of the year the Fed has hiked more than expected and has accelerated its balance sheet shrinkage plans and yet, as Goldman has repeatedly noted and all other banks have promptly followed, stocks have rallied while bond yields have been little changed on net. If a steady exit is causing no apparent pain, why not continue? (for one answer, read the latest note from Deutsche Bank on Conundrum 2.0)

Stock Market Tsunami Siren Goes Off
It will be ignored until it’s too late.
Everyone who’s watching the stock market has their own reasons for their endless optimism, their doom-and-gloom visions, their bouts of anxiety that come with trying to sit on the fence until the very last moment, or their blasé attitude that nothing can go wrong because the Fed has their back. But there are some factors that are like a tsunami siren that should send inhabitants scrambling to higher ground.
Since July 2012 – so over the past five years – the trailing 12-month earnings per share of all the companies in the S&P 500 index rose just 12% in total. Or just over 2% per year on average. Or barely at the rate of inflation – nothing more.
These are not earnings under the Generally Accepted Accounting Principles (GAAP) but “adjusted earnings” as reported by companies to make their earnings look better. Not all companies report “adjusted earnings.” Some just stick to GAAP earnings and live with the consequences. But many others also report “adjusted earnings,” and that’s what Wall Street propagates. “Adjusted earnings” are earnings with the bad stuff adjusted out of them, at the will of management. They generally display earnings in the most favorable light – hence significantly higher earnings than under GAAP.
This is the most optimistic earnings number. It’s the number that data provider FactSet uses for its analyses, and these adjusted earnings seen in the most favorable light grew only a little over 2% per year on average for the S&P 500 companies over the past five years, or 12% in total.
Yet, over the same period, the S&P 500 Index itself soared 80%.
And these adjusted earnings are now back where they’d been on March 2014, with no growth whatsoever. Total stagnation, even for adjusted earnings. And yet, over the same three-plus years, the S&P 500 index has soared 33%.
See also  Armstrong: Expect tensions between the US and China to reach new heights!
Trending: Views: 0