When interest rates on credit card debt get raised, the default aftershock isn’t felt immediately. It takes a few cycles of debt compounding on compounded debt for the final coffin nails to get pounded into a strapped household’s no-recovery debt coffin.

So check out the below chart. The last time credit card debt interest was over 13% like it is now, new default rates were at 15% and the country was falling into the teeth of the Great Recession. The Fed rammed ZIRP to the fore and with dramatically reduced interest due, defaults fell.

Now we’re back at 13% interest, and unless the Fed suddenly reverses course, those rates are headed even higher. And we’re only at a 6% default rate. ZIRP is over. QE is over. The wave is getting close to shore, it just hasn’t crashed yet. 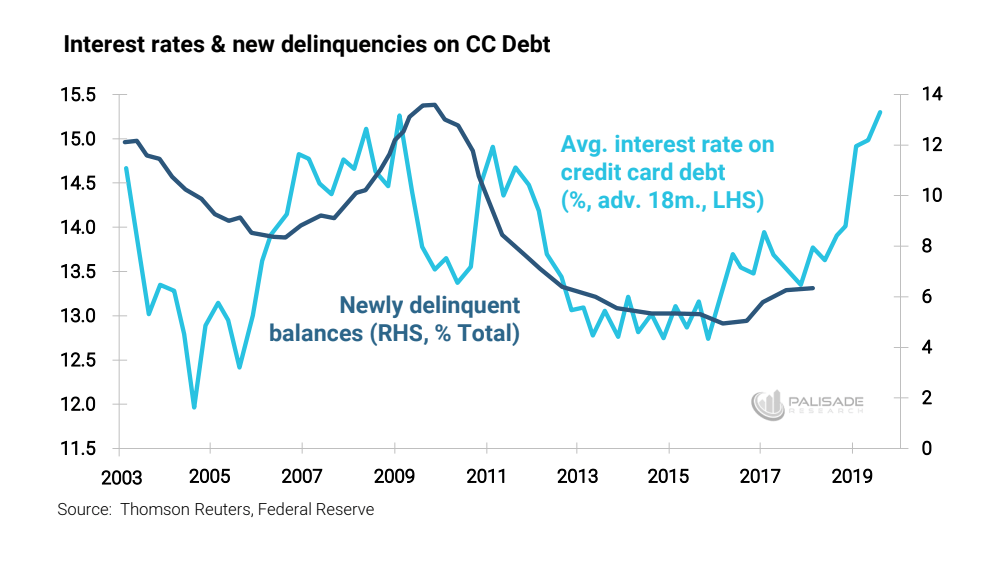 Lately there’s been concerning news about Americans and their ability to service their debts.

Two weeks ago I wrote about the alarming rise in subprime auto loan delinquencies – a 22 year high.

What’s puzzling is that the last time delinquencies were this high – the U.S. economy was in a deep recession.

See also  If the credit impulse matters as much as it has done in prior cycles, then we haven't even seen the beginning of the bond rally.

And that’s what we’re seeing. After years of steady relative health, credit-card users are now having a harder time making payments on their balances. Just look at the sharp rise in delinquencies since 2017.

ORIGINAL SOURCE: Drowning in Debt: Delinquencies Are Surging and It’s Only Getting Worse by Adem Tumerkan at Palisade Research on 5/29/18