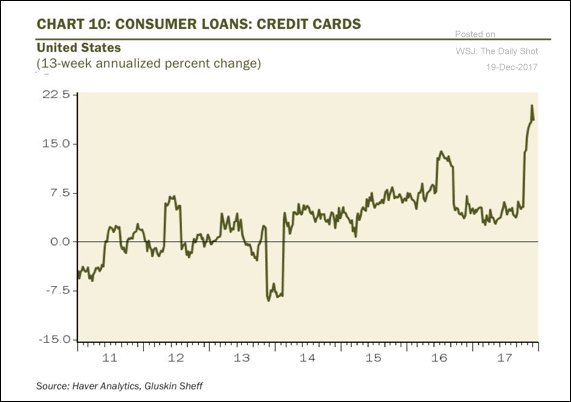 Americans increasingly relied on credit cards to make payments in 2016, and made more of those payments remotely, according to new data the Federal Reserve released Thursday.
The number of credit-card payments grew 10.2% last year, to 37.3 billion, compared with an annual growth rate of 8.1% over the previous three years.
The Fed attributed the increase in part to “continued strong growth” in the number of remote payments, such as online shopping and bill paying, which represented 22.2% of all general-purpose credit- and debit-card payments. Remote payments increased 1.5% from 2015, the Fed said. By value, remote payments represented 44% of all general-purpose card payments.
The data released Thursday are part of a new annual collection of information on trends in payments — including credit cards, checks and other electronic payments — that will supplement the Fed’s triennial study of the payments system.

Subprime Auto Defaults Are Soaring, and PE Firms Have No Way Out

Private-equity firms that plunged headlong into subprime auto lending are discovering just how hard it might be to get out.

A Perella Weinberg Partners fund has been sitting on an IPO of Flagship Credit Acceptance for two years as bad loan write-offs push it into the red. Blackstone Group LP has struggled to make Exeter Finance profitable, despite sinking almost a half-billion dollars into the lender since 2011 and shaking up the C-suite multiple times. And Wall Street bankers in private say others would love to cash out too, but there’s currently no market for such exits.

In the years after the financial crisis, buyout firms poured billions into auto finance, angling for the big profits that come with offering high-interest loans to buyers with the weakest credit. At rates of 11 percent or more, there was plenty to be made as sales boomed. But now, with new car demand waning, they’ve found the intense competition — and the lax underwriting standards it fostered — are taking a toll on profits.

See also  Credit card delinquencies are rising faster. A major employment crisis, such as during the Great Recession, will entail a large increase.

Even though consumer confidence cooled for a second straight month in November, CNBC is reporting that holiday spending for the average American household is on track to be the highest in 12 years.

Amazingly, the CNBC All-America Survey found that the average family will spend $900 for the first time in the 12-year history of the poll, eclipsing last year’s estimate of $702 by a wide margin.

Furthermore, the survey of 800 American households – which has a margin of error of plus or minus 3.5 percentage points – found a surge in the percentage of Americans planning to spend more than $1,000. The number climbed to 29%, up from 24% last year.
But before economists and retail analysts begin recalibrating their expectations, it’s worth noting that much of this spending will be funded by debt. Another study by RentCafe which examined spending habits of American renters discovered that, in the 50 largest US metropolitan areas, the average renting family will go into debt due to holiday-related expenses, debt that must be paid off in the opening months of the following year.
Here’s what an analysis of the average renter’s household budget for November and December looks like. As the chart shows, the average American family of four can spend $5,865 during that period without dipping into savings or going into debt.

Bloomberg–8 hours ago
The benefits of central banks pumping money into the economy by buying securities diminish over time, according to a BIS paper. That’s the conclusion of a Bank for International Settlements Working Paper by Henning Hesse, Boris Hofmann and James Weber, who compared the effects of the asset purchases in the U.S. …

Bloomberg–18 hours ago
Some have been warning recently that a crash in leveraged loans, one of Wall Street’s hottest debt markets, could do investors a lot more damage than in the past. Investors, though … U.S. companies have raised nearly $1.4 trillion in the relatively risky lending market this year, up 46 percent from a year ago. The lack of …

RTE.ie–8 hours ago
The Bank of Japan will also keep charging a negative interest rate on some accounts held by financial institutions at the central bank in a bid to prompt lending by commercial banks. Investors will scrutinise remarks by Bank of Japan chief Haruhiko Kuroda later Thursday for clues about a timeline for pulling back its huge …

Bloomberg–10 hours ago
Some see it going from 7.25 percent on Thursday to as high as 7.50 percent, as a potentially wider fiscal deficit risks more debt sales by the government and elevated … With the 10-year yield up 73 basis points in 2017, benchmark sovereign bonds are set to end a three-year winning run, during which the yield slipped 231 …

The Detroit News–17 hours ago
… pension and retiree liabilities to the state. Municipalities with large debts could be required to submit a corrective action plan to a new Municipal Stability Board within the Department of Treasury. Snyder called the final package “an important step in addressing one of Michigan’s remaining unfunded liability challenges.”.
See also  UKRAINE Seeks Debt Freeze - Another Country Defaults, who's next
Help Support Independent Media, Please Donate or Subscribe: Trending: Views: 8