– Widening of the spread between LIBOR OIS (overnight index swap) rate raises concerns
– Spread jumped to 9 year widest spread, rising to 54.6bps, most since May 2009.
– Libor recently moved to over 2% for first time since 2008
– Wider spread usually associated with heightened credit concerns 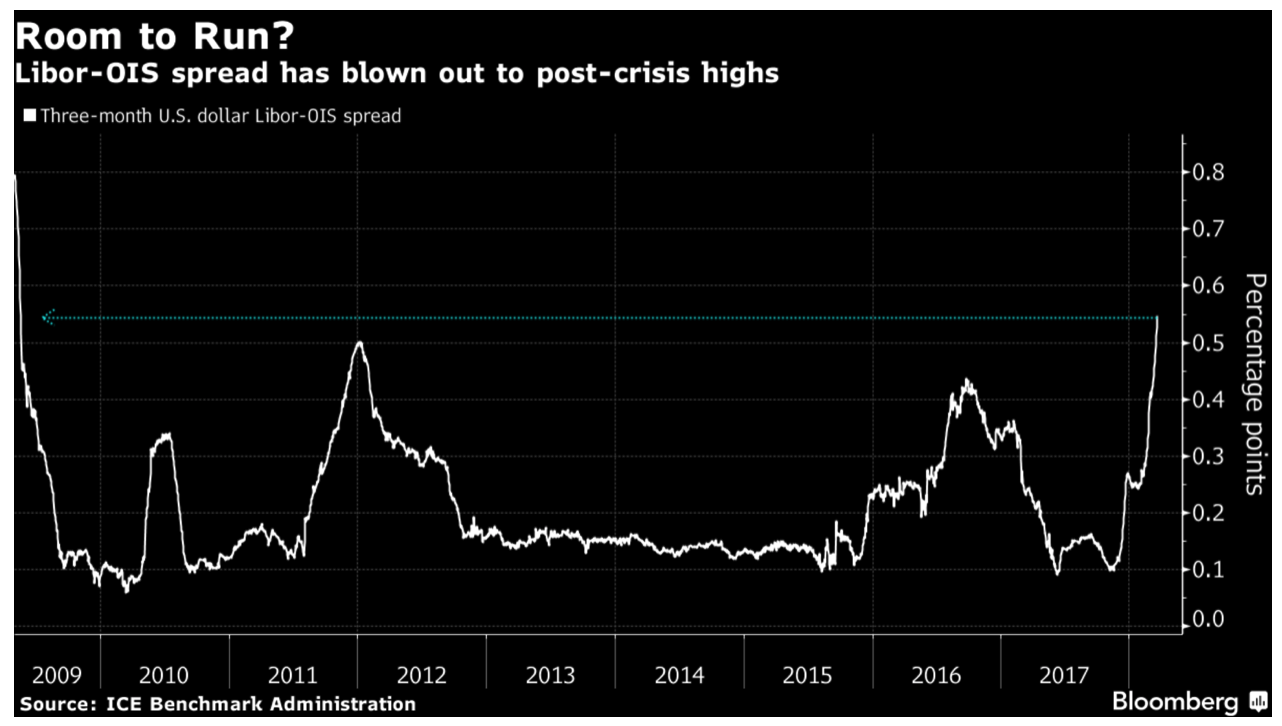 Major credit concerns are back as one of the key U.S. metrics, the LIBOR-OIS spread has been climbing sharply and is now higher than levels seen during the height of the eurozone sovereign debt crisis of late 2011 and early 2012. Indeed, it has risen to levels last seen at the height of the blogal financial crisis in 2009.

The spread has doubled since January and in the last month it has widened by 15 basis points, putting it above 0.50%.

Usually this kind of divergence between the two rates is not seen without some kind of credit issue. Only now are investors beginning to ask how much wider it can go and what it says about financial markets. 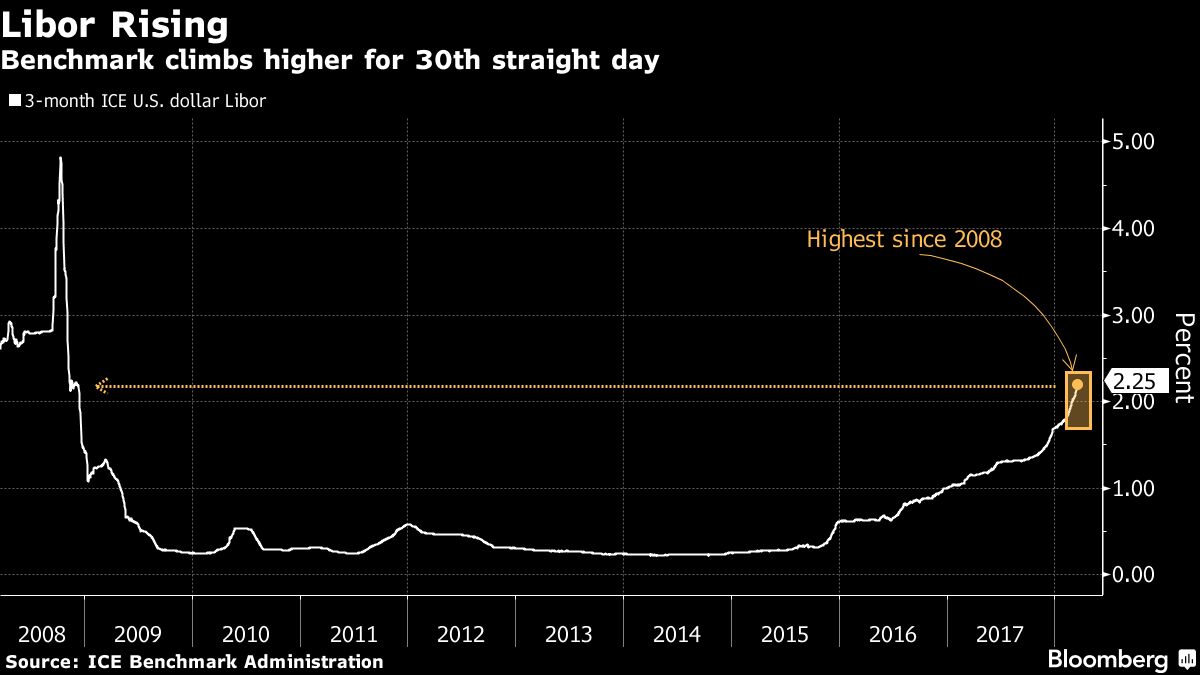 The London Interbank Offered Rate (LIBOR) is the key benchmark interest rate for short-term loans around the world.It is the point of reference for the majority of leveraged loans, interest-rate swaps and, of course, some mortgages.

It is this rate which is primarily responsible for the widening of the spread.

LIBOR has been on the up since February 7th, reaching 2.25%, its highest level since 2008. Markets are concerned that this isn’t the highest we will see it go, as there may be more room for it to run.

At the moment much of the mainstream media and banks are passing of the increased rate as something caused by technicals. The most frequently cited explanation is the increase in T-bill issuance since the debt-ceiling was raised but additionally the recent US tax overhaul and Fed tightening is also being blamed.

However, these are the very obvious and somewhat easy explanations. As Zerohedge pointed out yesterday, there are six possible explanations for the increase in the spread, the latter three arguably the most realistic and concerning.

– repatriation to cope with US Tax Cuts and Jobs Act (TCJA) and new trade policies, and concerns on dollar liquidity outside the US

– demand for funds in preparation for market stress

The reality, however, is that without a specific diagnosis what is causing the sharp surge wider, and thus without a predictive context of high much higher it could rise, and how it will impact the various unsecured funding linkages of the financial system, it remains anyone’s guess how much wider the Libor OIS spread can move before it leads to dire consequences for the financial system.

Usually a widening of the spread is accompanied by heightened credit concerns. There are now questions being asked as to how damaging this will be and this is bringing an increase in nervousness around risk assets.

At present the widening of the spread is not simply due to a reluctance by banks to lend to one-another, as has been the case with previous LIBOR increases. But, it is an indication of tightening financial conditions. This move will have an adverse affect on both funding and lending costs.

“What this means is that rates on more than $350 trillion of debt and derivatives contracts hitched to the U.S. benchmark are on the rise…Overleveraged entities will be in for a spot of trouble. We have a situation where half of the investment-grade bond market in the USA is BBB,” –  Marketwatch quoted David Rosenberg, chief economist and strategist at Gluskin Sheff.

Consider the fact that the last time dollars cost this much for banks to borrow we didn’t know if the Eurozone was going to survive. Prior to that the global financial system was just coming back from a near-total collapse. Right now there are few signs of increasing stress in the interbank dollar lending markets, as there were a few years back but this doesn’t mean there isn’t stress elsewhere.

The rise above 50 basis points will serve as a key psychological level and it will be interesting to see how much further it strays. Despite the belief that the gap can’t widen much further this is wishful thinking.  Not only could the spread widen further but general market sentiment could then sour if excess reserves of banks at the Fed start to fall.

See also  If the credit impulse matters as much as it has done in prior cycles, then we haven't even seen the beginning of the bond rally.

LIBOR impact felt around the world

Earlier today Bloomberg outlined how LIBOR’s increase will be felt in funding markets around the world. Attention was drawn to the impact on Saudi Arabia, Hong Kong and Australia.

Libor’s rise is complicating Saudi Arabia’s efforts to stem the risk of capital flight as the Fed is poised to continue raising rates. 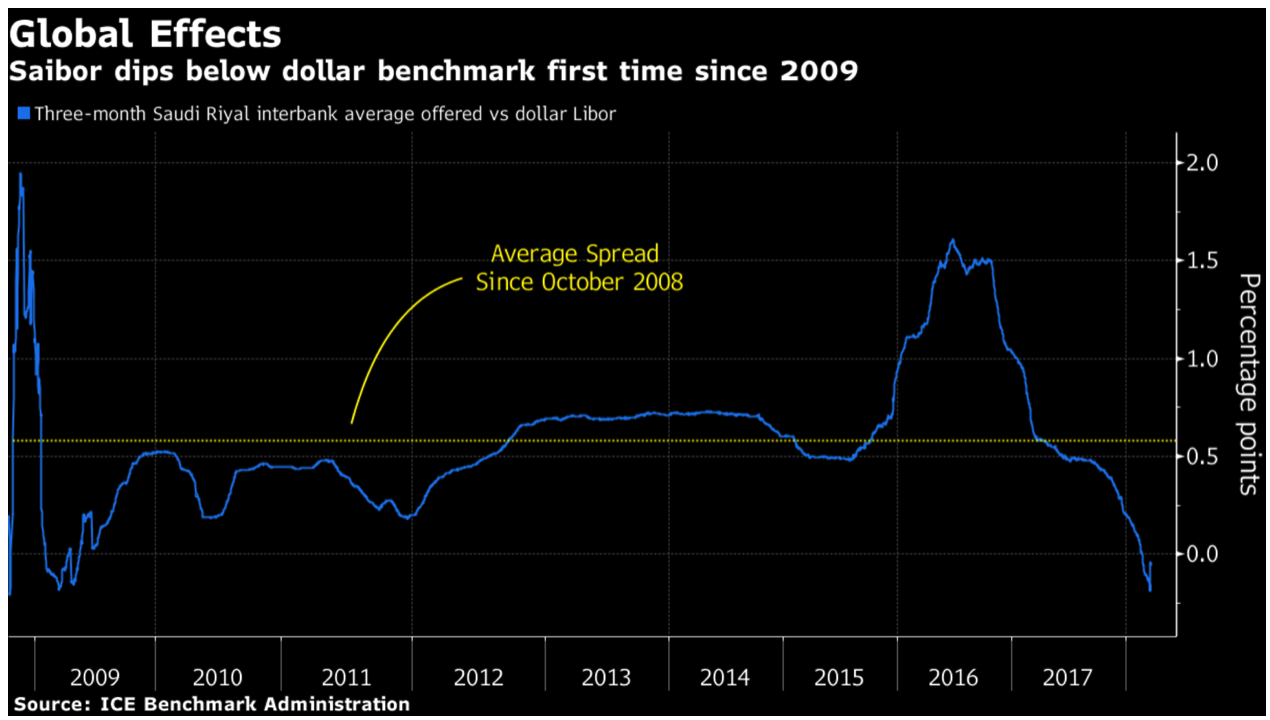 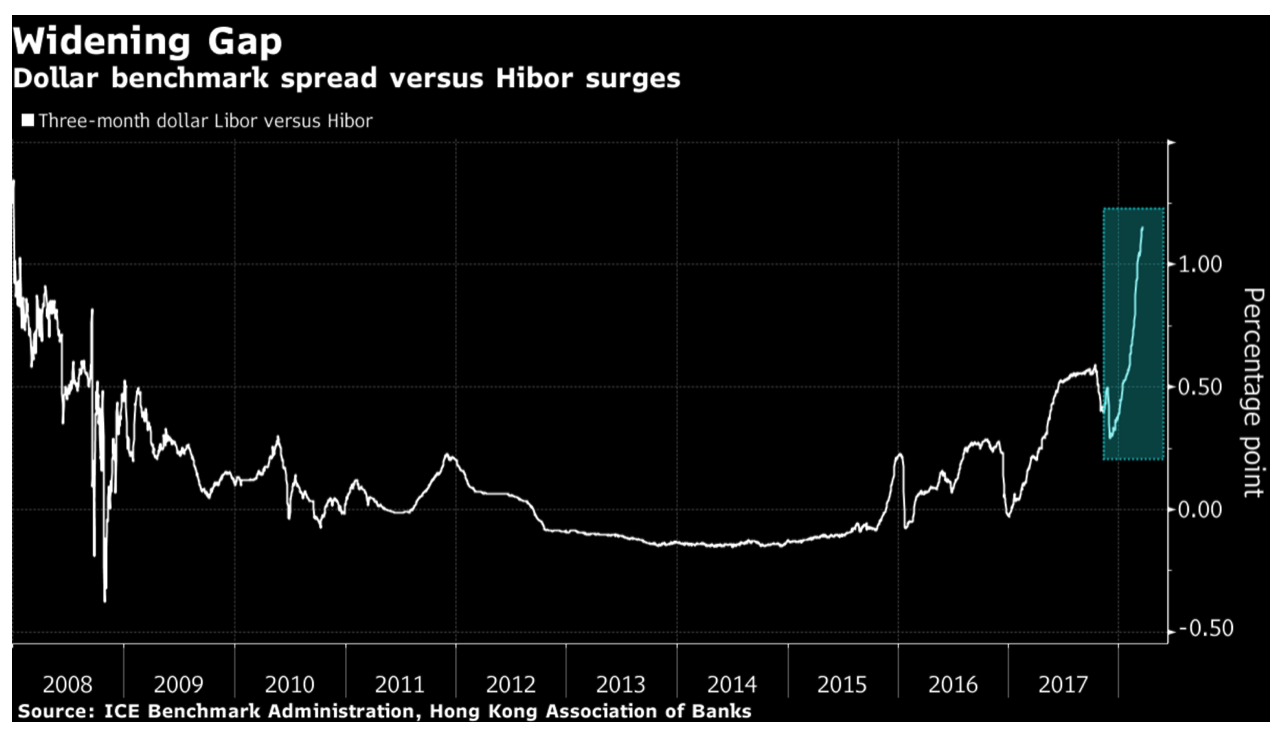 The leap in Libor is also being felt in Australia’s financing markets.

It’s made overseas borrowing more expensive for the country’s banks, which could push up domestic issuance. 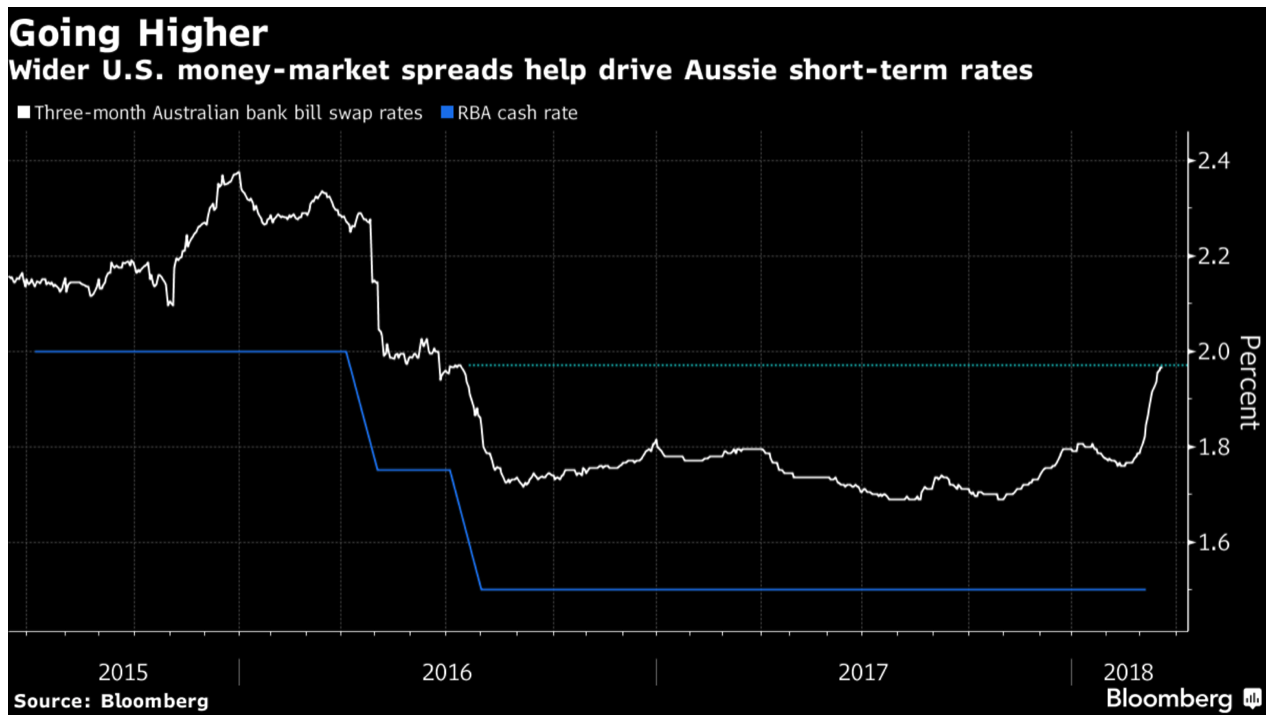 Both Zerohedge and Citi’s Matt King believe “the blow out in Libor OIS not only matters, but could have very direct – and dire – consequence on equities in the coming weeks.”

What does this mean for me?

LIBOR is most likely on most people’s radars thanks to the LIBOR scandal. Today, it should be on your radar because of what it’s increase and influence on financial markets means for the global banking and financial system.

In short, no one is making too many noises about the uptick in LIBOR and the widening spread between LIBOR and OIS. However, it will be on the radar of central banks, namely the Fed.

At present, the Fed claims to be on a path to tightening monetary policy. If lending conditions between banks and credit markets become a cause for concern then the US central bank may be forced to or have an excuse to step away from their plan. This would see a return to the easy money era which has barely managed to keep economies afloat.

As we have explained previously, central bankers are pretty much all out of monetary tools for when it comes to attempting to “fix” money markets and the economy again.

Investors should take note that LIBOR OIS spread is indicating that all is not ‘Goldilocks’ like in the U.S. credit markets and there are risks that the debt laden financial system may experience difficulties again.

What Peak Gold, Interest Rates And Current Geopolitical Tensions Mean For Gold in 2018