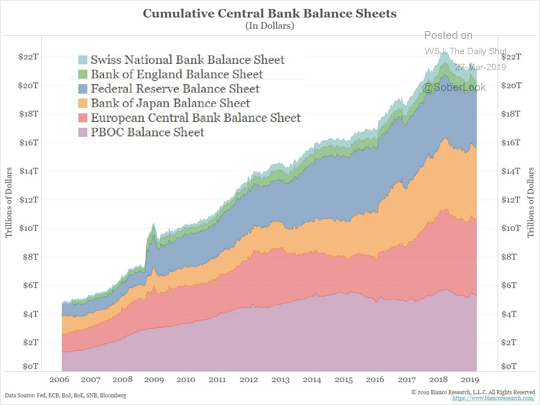 This is the process by which their balance sheets have expanded in recent years.

Quantitative easing (QE), also known as large-scale asset purchases, is a monetary policy whereby a central bank buys predetermined amounts of government bonds or other financial assets in order to inject money directly into the economy. An unconventional form of monetary policy, it is usually used when inflation is very low or negative, and standard expansionary monetary policy has become ineffective. A central bank implements quantitative easing by buying specified amounts of financial assets from commercial banks and other financial institutions, thus raising the prices of those financial assets and lowering their yield, while simultaneously lowering short term interest rates which increases the money supply. This differs from the more usual policy of buying or selling short-term government bonds to keep interbank interest rates at a specified target value.