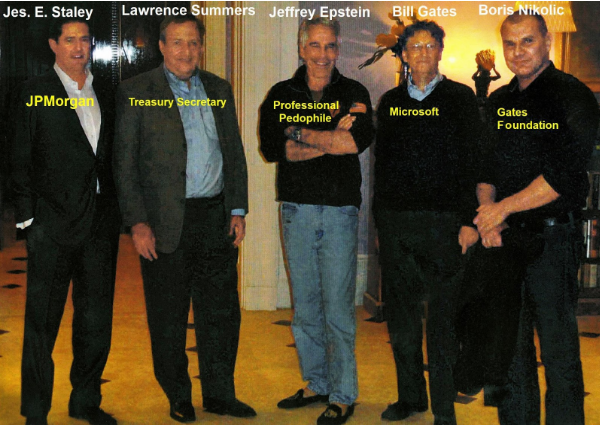 Something interesting is happening, or it’s just a red herring for the goyim? Who knows, but according to a recent article from legacy media, Melinda Gates, who is now single in case you’re interested, was feeling uncomfortable about Bill meeting with Epstein. Who knows, maybe Ghislaine Maxwell made a deal and is singing like a canary, and Melinda ain’t goin’ down with this ship.

Or, maybe this divorce is not about Bill and Melinda, it is about asset shifting. Let’s see if Melinda gets the lion’s share of the assets while Bill holds on to the paper wealth. Also, if you wanted to dump half your stock without freaking out the market, a fake divorce would be great cover. As in, this ‘divorce’ is a huge sign that a massive stock market crash is incoming.

Getting back to our story, the respective meetings Melinda is complaining about took place back in 2013, or 8 years ago for gen-z’ers, which is rather strange on her part. I mean, why wait so long girl?

According to what we know so far, Bill Gates, the philanthropist vaccine-poop-population-control obsessed billionaire has met with Epstein at least 6 times, including at a time when Epstein was a convicted pedo.

Bill not only flew Lolita Express, Epstein’s privat jet multiple times, but he also visited Epstein at his mansion in New York more than once.

All this is mainstream information, as in this is what they admit to be true. Or, to put it bluntly, this is the least we know about Epstein’s Mossad-backed blackmail operation and Bill Gates. Remember who the Maxwells are.

Now, if you ask me, there was only one reason to be friends with Epstein, and it wasn’t for financial advice. And speaking about Epstein, I wonder which year it was that Bill started preaching about climate change, drinking poop water, eugenics and similar crap.

Because, you can’t bribe or threaten violence with the ultra-rich. Blackmail is much more effective.

And that was Epstein’s shtick.

Jeffrey Epstein was probably the pimp for a US/Israel government honey trap / same sex / child sex blackmail operation. It most likely included some or all of the following: US Department of Justice / FBI / US Central Intelligence / Israeli Mossad. He wasn’t the first such pimp to die by “suicide.” The previous most high profile government pimp to die of “suicide” was Craig Spence.

Facts like these have been known for many decades from first-hand accounts and published in books, newspapers and other articles. The legacy media are unanimous in refusing to actually inform their viewers about these events. They protect the perpetrators among the ruling elites because they are also the perpetrators of these crimes.

It’s funny yet very telling in regard to who lords over us, that in the country running around as global moral authority, being a wealthy jewish child molester is a state sanctioned activity.

The preposterous story about Epstein hanging himself in an anti-suicide cell, on a tailor made horizontal suicide bar – while under an international spotlight, guards sleeping, cameras broken, then apparently lost was truly humiliating for the American people, who were basically told by the elites: “we don’t care about what you think or what you know, what you’re gonna do about it?”

And the answer is: nothing.

Then we had the stolen election, and now the country is circling the drain, because people are too lazy or too stupid to get off their damn’ couches.

PS: Is it just me, or Bill is aging like a lizard, or he’s fixing to shed his skin – tough call.

Anyway, are you not entertained?

READ  Audience Member Calls Out Bloomberg For Pushing Gun Control While Using Armed Guards: Does Your Life Matter More Than Mine?
READ  The Politicians Who Refuse to Give Up Control
2,318 views