The COVID-19 pandemic forced governments around the world to go on a spending spree to prop up their economies. At the same time, fear of the virus combined with strict lockdowns are keeping people at home, causing tax revenues to plummet. How has this ultimately impacted the world’s debt? This visualization breaks down the debt to GDP ratio for each country around the world. 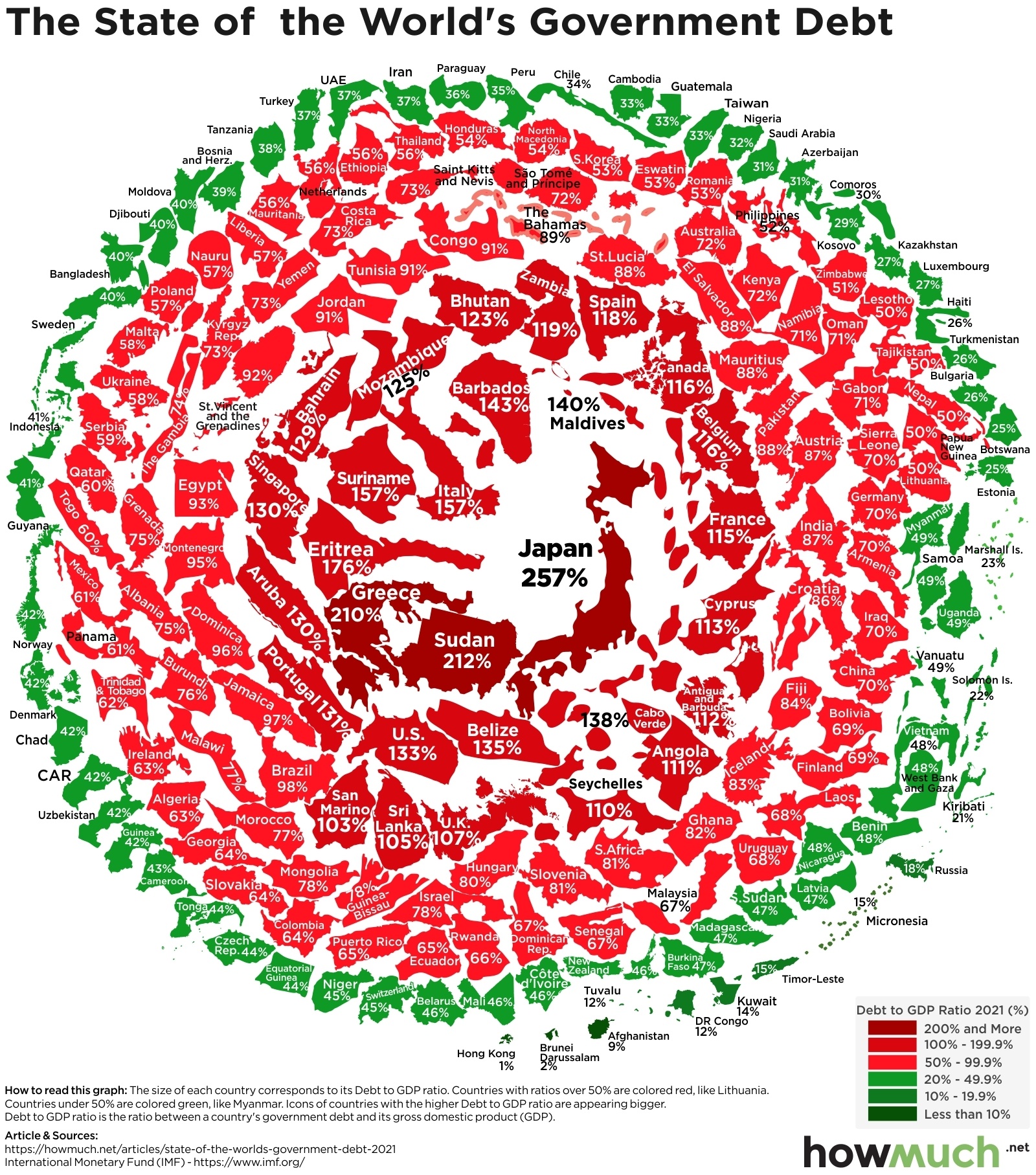 We created our visualization by taking debt to GDP ratios for each country around the world according to the International Monetary Fund (IMF). The numbers represent figures for 2021. This measure is important because it puts government debt within the context of the size of each country’s economy. For example, the U.S. has a massive economy and can tolerate a lot more debt than somewhere with a comparably smaller economy, like Greece. In this case we adjusted the size of the county and its color to correspond to the level of debt, providing a unique snapshot into the growing debt problem lots of countries are experiencing.

The bad news is that there are lots of countries with ever-increasing government debt. An incredible 32 countries now have debt to GDP ratios larger than 100%, meaning the government carries more debt than the entire annual output for their economies. And there is a small number of countries with very little debt, especially places that rely heavily on oil, like Kuwait (14%), Russia (18%) and Saudi Arabia (31%). The vast majority of places around the world lie somewhere in between these two extremes, carrying somewhere from 50-99% of debt to GDP ratios. From this perspective, the U.S. carries more debt than the average country given the size of its economy (133%), just outside the top 10.

READ  Dr Naomi Wolf Warns Vaccines Could Possibly be a "BioWeapon" - UPDATE: She is Now Suspended From Twitter

Our visualization represents total government debt as a percentage of GDP for 2021, and it’s an update from the same approach we took in early 2019. Comparing the numbers from before the pandemic to the most recent set of data allows us to see how the pandemic influenced total debt levels. Japan remains the world leader, rising from 238% of GDP to 257%. In fact, there are now 3 countries with a debt to GDP ratio over 200%, including Greece (210%) and Sudan (212%). And the U.S. has risen from 105% to 133%. At the highest level then, no country has moved out of debt over the last couple years, and almost everywhere in the world is going deeper and deeper into the red. And with President Biden proposing trillions in additional spending both to revitalize and transform the American economy, the situation is likely to get even worse before it gets better.

How much debt do you think the world can take on before it starts to impact growth rates? Let us know in the comments.