A global recession without the USA? That's what I'm hearing. Reminds me of the clowns who were talking about decoupling back in 2008. No such thing. Sorry to be the one to tell you.

BofA: "we revise down 1Q 2019 growth to 1.0% from 1.5%. The revision largely reflects greater drag from inventories, with some adjustments to other components. Full year 2019 growth remains at 2.2%."

Algos bought every headline RUMOR of global synch growth from16-18.
Algos have not sold one 2019 YTD data release.
Every country and the USA has the worst data in decades.
00 and 08 were YS driven collapses. 18-19 is a global collapse of growth.

Quite a worrisome trend: The inventories-to-sales ratio is climbing again #recession2019? pic.twitter.com/15TddfD7ib

U.S. construction spending posted the smallest annual increase since 2011 as homebuilding slowed amid higher borrowing costs and a glut of apartments in some areas. 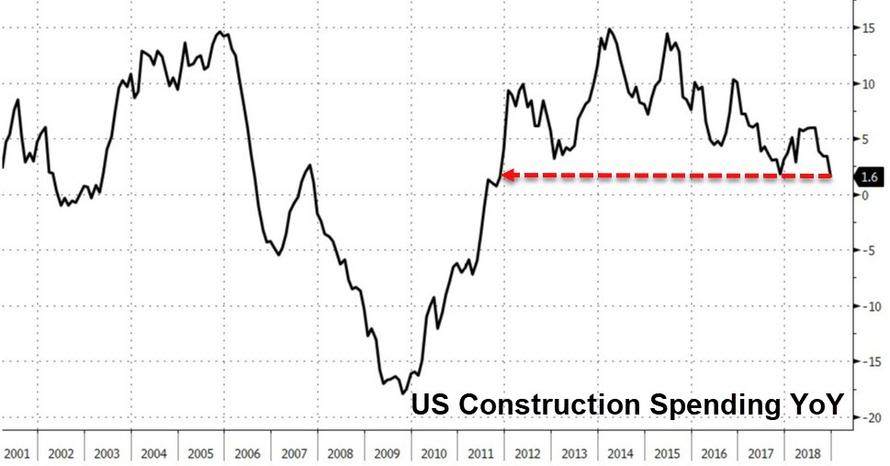 For December, spending declined 0.6% from the prior month, missing forecasts for a 0.1% gain.

Citi’s global surprise index has dropped through its 2018 low to the weakest since 2013 t.co/oVAdGLj2Xl pic.twitter.com/mDYYUh2N1p

U.S. personal income fell for the first time in more than three years in January as dividends and interest payments dropped, pointing to moderate growth in consumer spending after it fell by the most since 2009 in December.

The report from the Commerce Department on Friday also showed inflation pressures remaining tame, which together with slowing domestic and global economic growth gave more credence to the Federal Reserve’s “patient” stance towards raising interest rates further this year.

Personal income slipped 0.1 per cent in January, the first decline since November 2015, after jumping 1.0 per cent in December. Income was weighed down by decreases in dividend, farm proprietors’ and interest income.

An accident waiting to happen? interest rates on credit cards hit the highest level in at least two decades. pic.twitter.com/UoiCgDkaLO