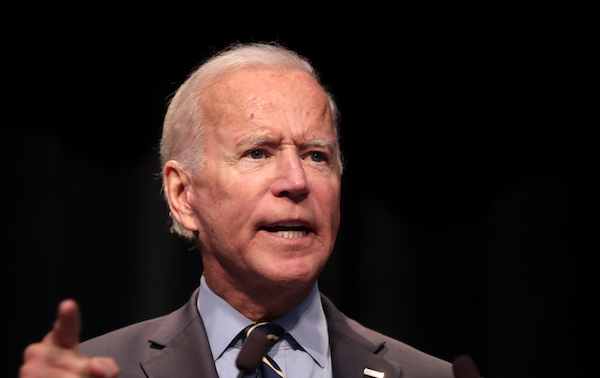 Every now and then Sleepy Joe channels reality, accidentally or otherwise, and did so recently in spades. When asked by a reporter how he was going to slim down his massive $3.5 trillion social spending boondoggle to bring Senator Manchin and other moderates into the “yes” column, he let the budget gimmick cat right out of the bag:

For example—you’ve heard me say this before, but it’s relevant — when Roosevelt passed Social Security, it didn’t bear any resemblance to what it is now. And so, the idea that (what)…..gets passed is going to be the totality of what it’s going to end up being……..

……. Look, it’s very important to establish the principle — the principle that is contained in the amendment, such as childcare, the Child Tax Credit. Well, it may be that the Child Tax Credit gets altered in terms of amount. But once it’s put in place, even though it’s only for several years, it gets harder and harder to take it out. And that’s my point to people. We don’t have to get everything all at once.

So let’s cut the to the chase. The once worthy notion of 10-year budget projections has been turned into an absolute scam by the bipartisan duopoly on Capitol Hill through a gimmick called early expiration. That is, Dems tend to cause spending programs to look cheaper in the 10-year projections by having them expire in, say, year #5, while the GOP did the same thing in spades with early expiration of the 2017 tax cuts.

Of course, when these expiration dates come, they get routinely extended at the 11th hour because by then it is purportedly “unthinkable” to hit beneficiaries with a cold turkey cut or taxpayers with an unwelcome increase. Accordingly, the numbers game as between Biden’s $3.5 trillion versus Senator Manchin’s $1.5 trillion and a possible compromise somewhere between $1.9 trillion and $2.2 trillion is just Washington’s version of legislative Kabuki Theater.

What really matters, of course, is the creation of massive new universal entitlements (i.e., not work and means-tested) for children, maternity leave, childcare, free college and expanded Medicare, Medicaid and ObamaCare—plus a whole slew of climate change based crony capitalist nonsense––not the gimmick-ridden book-keeping by which the legislative language is officially scored.

For instance, making the $3,600/$3,000 refundable child tax credit permanently available to essentially 90% of the population will cost $110 billion per year or $1.1 trillion over the 10-year budget horizon. But if they write it to expire in September 2024 on the eve of the next presidential election, two things are certain.

First, the CBO (Congressional Budget Office) will be forced to score it as costing $330 billion, not $1.1 trillion, on a true 10-year basis. And, secondly, that expiration will never happen in a month of Sundays. Both parties will pledge to “protect American families” at all hazards during their summer conventions and then make a noisy show of extending these child tax credits before they adjourn to campaign for the 2024 elections.

The truth is, there is almost nothing in the plan that won’t become permanent due to deeply embedded constituencies once they “plant a flag” on new entitlements and climate change pork barrels, as one of the more honest Congressional Dems explained a few days ago:

Rep. Jamie Raskin (D., Md.) told liberal activists on a call Monday night that he wanted to include a long list of programs that he hoped would prove popular enough that lawmakers in the future would feel compelled to continue them.

Needless to say, if a corporate CEO explained his financial statements that way, he’d soon have some hot dog US Attorney perp-walking him to the nearest Federal courthouse. So, for the sake of honesty within the cesspool of Washington’s budgetary corruption and malfeasance, here are the relevant facts.

According to our friends at the Committee for A Responsible Federal Budget (said “committee” is mainly composed of old timers who left Washington decades ago!), the Biden/Dem plan will cost a minimum of $500 billion per year or 2.3% of GDP. That’s far north of $5 trillion over the 10-year budget horizon when you factor in the cost of added debt and the revenue gimmicks which won’t begin to yield their projected savings (e.g. $800 billion of added revenue from doubling the number of IRS agents).

Self-evidently, it doesn’t take too much imagination to recognize that almost all of these measures have “permanent” stamped on their forehead, regardless of how their expiration dates are gimmicked in the final legislation. For instance, the parents of an estimated 35 million children will receive the Child Tax Credit, including tens of millions who will receive $300 to $1,500 of monthly payments (for one to five eligible kids), whether they owe any Federal taxes or not.

Likewise, every one of America’s 83.7 million families will be eligible for 12 weeks of paid family and medical leave. Benefits are based on a sliding scale of wage replacement like Social Security, starting at 85% at the bottom tier of wages (under $15,000) and phasing out at 5% for earnings between $100,000 and $250,000.

What that means. of course, is that a $20,000 per year hamburger flipper would be eligible for about $3,800 of Washington funded paid leave per year, while a $250,000 junior investment banker could collect $14,400. Do we see an iota of logic in spending $22.5 billion per year on that kind of upside-down malfeasance?

We do not. But we also know that it’s modeled on the Social Security wage replacement formula—so it will never go away once the ink is dry.

Even the items that are not strictly legal entitlements are mostly in like flynn. Thus, with every auto OEM joining the race to produce electric vehicles, the chance that the combined lobbies of Tesla and General Motors and everyone else in between will ever let the proposed $12,000 EV credit go away are somewhere between slim and none.

Similarly, the childcare industry in the US is currently a $54 billion per year business (2019). Accordingly, when Sleepy Joe and the Dems layer on another $35 billion in new childcare tax credits and direct subsidies, operators in that space will think they have died and gone to heaven.

More to the point, when you expand an industry by 65% via suckling it on the Federal teat, what we first called the “social pork barrel” way back in 1978 comes politically alive with a vengeance. The combined forces of tens of millions of household beneficiaries and tens of thousands of childcare vendors and care givers would simply become insuperable.

And that gets us to the gravamen of the case against the Biden Boondoggle. Namely, that owing to massive, chronic deficit finance and the unbalanced structure of Federal taxation, upwards of 130 million of America’s 144 million tax-filers pay virtually no income tax and just 7.6% of their incomes for the employee share of payroll taxes. This means that the overwhelming share of Federal spending is borrowed or paid for by the rich and corporations.

To be sure, it all comes out in the wash under full effects economics. Consumers, workers and investors ultimately pay the corporate tax and the rich provide the investment capital that keeps the main street economy going. But when it comes to directly feeling Uncle Sam’s presence in household budgets, it is already the case that benefits received far outweigh direct taxes paid by those 130 million units; and now the Biden social welfare expansion of the century with its numerous new universal entitlements will make it even more preponderantly so.

Indeed, when you actually pencil it out, you begin to wonder if there would be any net taxpayers left at all. While the example below is slightly on the exaggerated side because it is based on a family of four kids, one maternity leave and two wage-earning adults, it is nevertheless a gobsmacker when you compare current law taxes with the new benefits under the Biden/Dem plan.

Our example is based on a two-earner family with $150,000 in salaries and wages, of which the major earner makes $110,000. Three of the children (including the newborn) are under 6 years, one is under 18 years, and one is in two-year college, and the higher earning spouse takes 12 weeks of maternity leave to care for the fifth child.

See also  The IRS says its 87,000 new hires could help collect as much as $1 trillion

Based on these specifications, the family would receive $49,100 per year in benefits under the Biden/Dem plan:

By contrast, here is the income and payroll tax calculation for the same family under current law with $150,000 of earned income and taking the standard deduction (it doesn’t itemize):

There you have it. This family unit would be in the top 10% of all taxpayers, yet it would receive Biden/Dem benefits equal to 134% of its current income and payroll tax liabilities.

So, the question recurs. How in the world does the Federal government finance itself if even $150,000 per year families are not net taxpayers?

A quick breakout of the estimated outlays and receipts for the now completed FY 2021 reveals the dirty secret and tells you all you need to know. To wit, only 15% of estimated outlays of $7.25 trillion were directly paid by the bottom 130 million or 90% of tax filers. The rest was borrowed or charged to business and the richest 15 million taxpayers.

In short, Washington’s fiscal policy has degenerated to “don’t tax you, don’t tax me—tax and borrow from the fellow behind the tree”.

Needless to say, the above is before the so-called generational expansion of the Welfare State embodied in the Biden/Dem plan.

So, what we have coming down the pike is a fiscal doomsday machine. The bottom 90% will fund an even smaller share of Federal outlays and get even more entitlements and free stuff from Washington.

So, yes, the Biden Boondoggle is worse than you think. Very much worse.

Editor’s Note: The coming economic and political crisis is going to be much worse, much longer, and very different than what we’ve seen in the past.