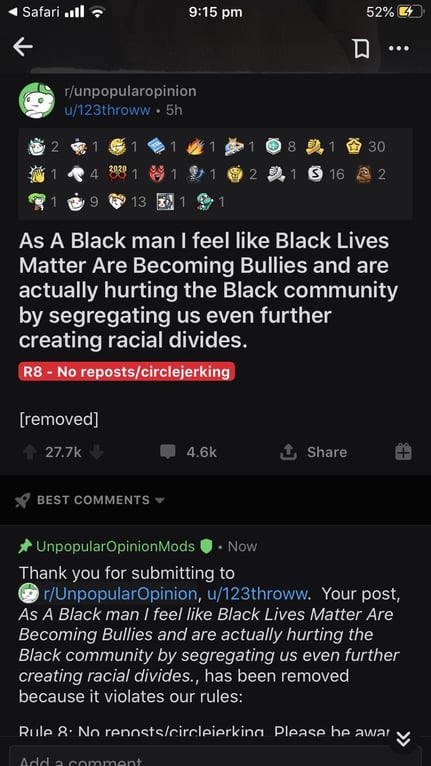 As A Black man I feel like Black Lives Matter Are Becoming Bullies and are actually hurting the Black community by segregating us even further creating racial divides. self.

First I’d like to start of by thanking the mods for having a place we can post our opinions being they may be unpopular everywhere else on Reddit. I sent proof to verify I am who I say I am. My post comes from a place of love. I feel absolutely powerless in what is happening in this country and I thought I can post my feelings here and hopefully someone can hear me out from a different perspective.

I feel people outside the black race think that we all think alike and share the same beliefs but this is so far from the truth. It’s true that he who shouts the loudest gets the most attention and that is exactly what’s happening in our country at the moment. There’s millions of African Americans that share the same thoughts as me, but we get chewed out or canceled when our thoughts stray from the status quo. There’s many videos of us speaking out against this, but it doesn’t make the news as it goes against the narrative.

A little About Me before I get into it:

I was born and raised in the “hood”. Newark, NJ to be exact. I still live here, not by choice but by necessity.

I AM NOT OPPRESSED!! Yes I still live in the city I grew up in, it’s not the ghetto by any standard but it’s not the suburbs neither. I have my own apartment, a nice car, and good credit. Am I where I want to be in life? No, not even close. But I’m working towards it. Where I’m at right now is 100% my fault and on me. I’m where I’m at in life because of my life choices. Had nothing to do with anyone else of any race, it was me. And have a plan to get where I want to be and there’s no doubt in my mind that I will get there if I put in the work necessary.

I’ve always been treated with respect by the police. To frame this I’m not just a black guy, I’m a very dark black guy. The black community comes in all shades from very fair skinned to very dark skinned. I fall into the darker category. I’ve gotten out of more tickets than I’ve received when being pulled over. I’ve never been to jail. One time I was put in handcuffs because I had a bench warrant because I didn’t pay a tiny ticket I completely forgot about.

These cops were respectful the entire time. They even took me to the atm so I could get money to bail myself out..lol..it was less than $200. They saw I wasn’t a threat and let me out of the handcuffs on the trip to the precinct. When we got there, the officer even apologized and said unfortunately I’d have to put the cuffs back on to walk into the precinct because it was policy. To add my license was suspended because of the unpaid ticket. But these officers drove me back to my vehicle and said “I can’t advise you to drive this car, but once we leave you can do what you want”. This proves treat people with respect you’ll get the same back. They could have towed my car and left me stranded and the precinct. But they drive me all the way back to my car and let me go. And I was definitely far from home in a area that you’d consider predominantly “white” if that’s a thing anyway.

I understand that they may have good intentions but they are going about it the wrong way. They are trying to get demands made by force and violence. I feel as though this is not the way to get things done as it’s just going to piss people off even more. Yeah you may get what you want, but it won’t be out of support but it what be out of fear. Fear of being canceled, fear of not being re-elected, fear of losing your job if you speak up against them. America is built on democracy. What I am seeing right now is not a democracy but a dictatorship. If you don’t agree with us then you are DONE. We’re going to cancel you and burn down your business.

The rioting and looting was the dumbest thing to do and should have been condemned by BLM. People say oh the business have insurance they can rebuild. First off, how are people supposed to go grocery shopping etc. if you burned down the businesses in your neighborhood? Secondly, when things like this happen businesses don’t usually come back. I’m from Newark,NJ. Back in the 60’s we had similar riots that lasted for days because of a rumor that a black man was beaten by the police. You can look the story up as it’s still a big event in history. But what I’m getting at is that my city is JUST NOW recovering from an event that happened over 50 years ago. These cities will never be the same, and I don’t mean that in a good way. Jobs will not return and these businesses are gone forever to never return.

I want to be accepted for who I am. Not because the government or BLM said you have to or suffer the consequences. The way they are going about this is causing a bigger racial divide more than ever and is counterproductive in what their trying to achieve.

Dr. Martin Luther King said “I have a dream that my four little children will one day live in a nation where they will not be judged by the color of their skin, but by the content of their character”.

Black Lives Matter don’t want that. They want special treatment for being born black. I want to get where I am because of my hard work. Not because I had to be hired to hit a “black” quota.

I’m rambling and don’t want to make this too long. But I wanted to get my opinion out there because me and others like me feel our voices are being stifled. And we are afraid to speak up because any deviation of opinion will get us canceled which is not right and makes this country no longer the democracy It used to be.

TLDR: Black lives matter is going about things the wrong way to bring change. I’m black and never felt oppressed because of my race. Things will get worse if we remain on this path.

Edit: Here’s Proof I am a black man for those stating I am a fake account. I will not apologize for not fitting into your narrative.

Edit 2: not sure why others can’t see the likes on this post so I’ll keep you updated. Currently at 7.1k likes

Edit: Link to original post on Reddit with the above text removed. It got to 28.9K with 5,804 comments before it was censored.