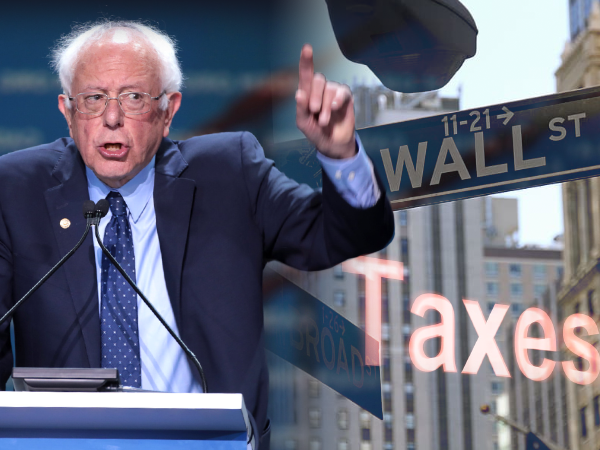 No matter what you think of him, there’s no denying that Bernie Sanders is a man on a singular mission.

As part of one of his far-reaching proposals, The Inclusive Prosperity Act of 2019, the Senator aims to “cancel every penny of student debt.”

For many on the left, the concept has been popular enough to garner Sanders significant support; so much so that he’s recently been polling in the top two for the Democratic nomination for president.

But for this proposal, the devil is in the details – specifically, how Sanders wants to pay for this massive outlay in government spending. According to documents on his website, he has proposed a financial transaction tax (FTT), which would impose a “modest tax for Wall Street.”

But Sanders’ definition of “Wall Street” might not align with yours.

According to a study conducted by the Center for Capital Markets, Sanders’ proposal is a “tax on investors, taxpayers, and consumers.”

Three key findings from the study provide some clarity on who would front the bill for this proposal:

#1 – Retirement savings will be hit hard.

“Under the version of the tax proposed by Sen. Bernie Sanders (D-VT), a typical retirement investor will end up with 8.5% less in his or her 401(k) or IRA after a lifetime of savings. In dollar terms, the average IRA investor would have $20,000 less at retirement as a result of this tax.”

#2 – Main Street will pay for the tax, not Wall Street.

“The real burden will be on ordinary investors, such as retirees, pension holders, and those saving for college. They will pay the tax directly when they trade, and pay it again as financial intermediaries pass on the taxes they face as a cost of doing business. FTTs are not actually a tax on financial intermediaries; they are a tax on investors.”

“Likewise, the transaction taxes paid by pension funds will reduce their returns, worsening existing problems with underfunded pensions and making it more costly for governments and corporations to provide pensions.”

Another word for “Wall Street” is “pension”, “401k”, and the mutual funds that regular Americans put their savings into.

Stop trying to pull a fast one on us. t.co/omN1GLApq9

If that weren’t bad enough, should this plan go into effect, the U.S. Chamber of Commerce has found that Americans might experience an 8.5% drop in retirement portfolio accumulation. For the average retiree, that can add up to quite a bit of retirement income loss over time.

Of course, it remains to be seen if Sanders will win the nomination. But he isn’t the only Democrat proposing ideas like this.

Elizabeth Warren Has Another Idea (But It Isn’t Any Better)

The Senator from Massachusetts recently proposed to offer “debt cancellation of up to $50,000 to more than 42 million people, or 95% of those with debt,” according to an op-ed at Washington Examiner. This doesn’t seem very fair to students who have already paid their loans off.

But more importantly, there is that nagging question: How would Warren’s proposal be paid for? The answerappears to be similar to the one for Sanders’ plan, with yet another “wealth tax” on financial transactions that involve derivatives and most types of securities, like stocks and bonds.

Eliminate as Much “Government Meddling” as Possible

We’ve already seen how government meddling with pensions could work out. We’ve seen how the federal bailoutsworked out.

So you might want to consider an alternative to Wall Street stocks to avoid the potential nightmare that could erupt if tax-hungry politicians get their way.

Precious metals like gold and silver fall into that alternative category that would not be touched by the financial transaction taxes proposed by some the Democrats running for President in 2020.