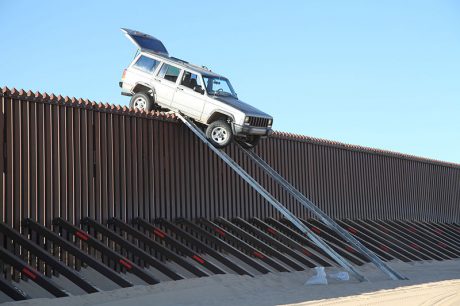 Mick Mulvaney, President Trump’s budget chief, said the wall is the administration’s “top priority” for the talks, adding they would support key ObamaCare payments to insurers if Democrats backed the border wall money.
“We’d offer them $1 of CSR payments for $1 of wall payments. Right now that’s the offer that we’ve given to our Democratic colleagues,” Mulvaney said during a Bloomberg Live interview, referring to the ObamaCare payments known as cost-sharing reduction (CSR).

In that same interview, Mulvaney added that “you cannot expect a president who just won [an] election to give up very easily on his highest priority.”
And I certainly agree with Mulvaney.  The border wall was the number one issue that Trump campaigned on, and if he unconditionally surrenders to the Democrats on this issue without much of a fight, it will essentially be the neutering of his entire presidency.
The Democrats seem to know what is at stake, and they are digging in for war.  At this point they are completely united in their stance that there will not be a single penny for a border wall.  The following comes from CNS News…

Sen. Dick Durbin, an Illinois Democrat, told CNN’s “State of the Union” on Sunday that President Trump should not expect Congress to give him any money to fund his “outlandish” border wall.
Trump has requested $1.4 billion to get the wall started in the current fiscal year, which runs through September, but Durbin on Sunday called it a political stunt and a poison pill:
“I hope the president will back off,” Durbin said.

So will either side back down by Friday?
I don’t think so, and that means that a government shutdown is coming.
Of course there is talk that Congress could pass a one week or two week extension to give negotiations more time, but that would just delay the inevitable.
And it isn’t just the border wall that is a sticking point.  Other issues such as funding for Planned Parenthood and increased spending for national defense could potentially derail any deal.  The following comes from Business Insider…

Thomas Block, a Washington policy analyst at Fundstrat, described the problem in a note to clients on Monday:
“In the House, there is a group consisting of Tea Party and Freedom Caucus Republicans who believe that almost any spending bill is too large for them to support. Therefore, Speaker Ryan is likely going to need some Democratic support to get a bill passed. The problem is that no Democrats will support a bill that contains the president’s stated priorities.
“Furthermore, many Republicans want to use the spending bill to stop all funding for Planned Parenthood, a clear poison pill as far as most Democrats are concerned.”

In order for the public to have three days to examine any bill before a vote happens, a spending bill is going to have to be unveiled in the House by Wednesday at the latest in order to meet the deadline.
Is that going to happen?
I doubt it, but it is always possible.
But even if a bill gets through the House, that doesn’t mean that the Senate will be on board with it, and unless that bill contains funding for a border wall Trump may not sign it.
So what specifically would happen during a government shutdown?  The following is a good summary from Zero Hedge…

See also  AGENDA FIRST, LAST, AND ALWAYS: For Democrats, the pain of inflation is no reason to stop spending.

Congress is only going to be back in session for two weeks before another extended 10 day vacation begins on May 5th.
That means that the clock is ticking, and at this point a deal does not seem close.
Personally, I am fully convinced that the Democrats are more than willing to allow a government shutdown to happen, because they believe that it will damage the Republicans far more than it will damage them.
So they are not going to move from their demands, and that means that either Trump is going to have to give up his dream of a border wall or there will be a government shutdown on his 100th day in office.

18 thoughts on “Democrats: Trump Must Surrender On Funding For A Border Wall To Avoid A Government Shutdown On His 100th Day In Office”