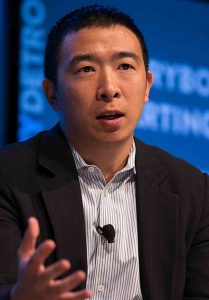 Democrat presidential candidate Andrew Yang made a wild claim without any evidence whatsoever that “we’re too late” in addressing climate change. Yang even said that people need to be evacuated to higher ground immediately. This is just astonishing to have such nonsense in a presidential election.

Yang admitted that the U.S. is responsible for only 15% of total global emissions. He said that even if the U.S. makes drastic changes in climate policy, it is not going to do much in the grand scheme of things.

This is really amazing. So since we will all die in 12 years, eliminate all taxes, and empty all pension funds that have money — we should just party until the end comes.