“You just can’t make this shit up”.

Special Counsel Robert Mueller is reportedly investigating payments made to President Trump’s foundation from a Ukrainian steel tycoon that as it turns out, was the largest individual donor to the Clinton “charity”.

Big League Politics , “Investigators subpoenaed the Trump Organization this year for an array of records about business with foreign nationals, according to an April 9 New York Times report. “In response, the company handed over documents about a $150,000 donation that the Ukrainian billionaire, Victor Pinchuk, made in September 2015 to the Donald J. Trump Foundation in exchange for a 20-minute appearance by Mr. Trump that month through a video link to a conference in Kiev.”

There you have it. Pinchuk is the boogeyman. A Ukrainian businessman who donated to the Trump Foundation. It’s the closest thing suggesting collusion Mueller has come up with to date.

But there’s one problem: The Times conveniently left out of today’s story the fact that Pinchuk has previously donated to the Clinton Foundation to the tune of $25 million, making him the largest individual benefactor to the Clinton’s “charity.”

He is also a close personal friend to Bill Clinton.

Doesn’t every husband wish that Bill Clinton looked at their wife the way he ogles at Pinchuk’s lovely wife?

Pinchuk appeared on the guest list for a 2012 dinner. The list was sent in an email exchange between Dennis Cheng, an executive at the Clinton Foundation, and Huma Abedin, Clinton’s deputy chief of staff during Clinton’s tenure as Secretary of State. The gathering was held at the Clinton’s home.

A FOIA request made in 2016 by judicial watch exposed the emails. Other exchanges show that Chelsea Clinton was invited to dine with Pinchuk when she visited Kiev, Ukraine in 2012. Pinchuk and Clinton were often in contact through a go-between named Melanne Verveer, a senior Ukrainian-American official at the State Department.

All of this occurred while Clinton served as Secretary of State, the nation’s top diplomat.

A Wall Street Journal chart shows that Ukraine topped the list of donors to the Clinton Foundation while Hillary served as Barack Obama’s Secretary of State:
3rd pic down 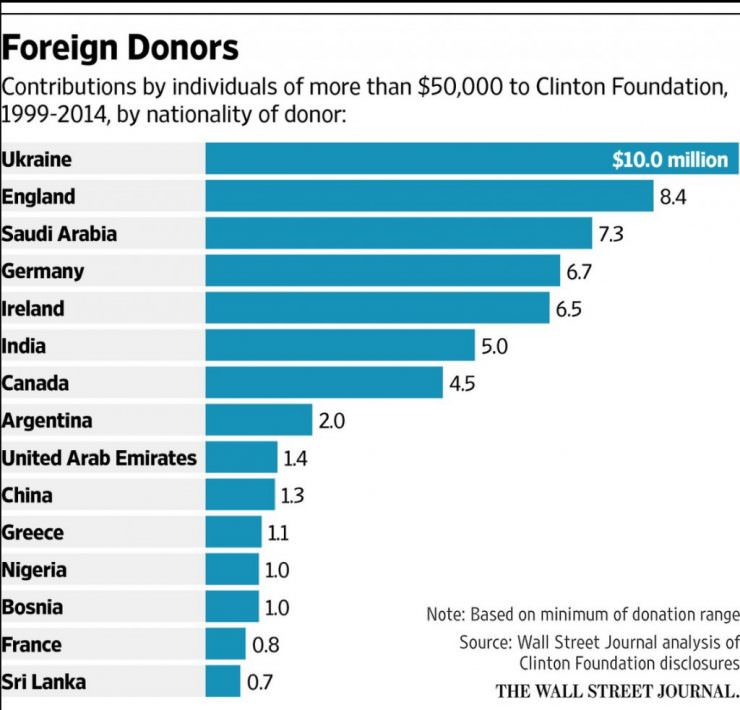 Between 2009 and 2013, including when Mrs. Clinton was secretary of state, the Clinton Foundation received at least $8.6 million from the Victor Pinchuk Foundation, according to that foundation, which is based in Kiev, Ukraine.

All told, more than a dozen foreign individuals and their foundations and companies were large donors to the Clinton Foundation in the years after Mrs. Clinton became secretary of state in 2009, collectively giving between $34 million and $68 million, foundation records show. Some donors also provided funding directly to charitable projects sponsored by the foundation, valued by the organization at $60 million.

The foreign donors reached by The Wall Street Journal said they contributed to the foundation for charitable, not political reasons.

Former President Bill Clinton promised the Obama administration the foundation wouldn’t accept most foreign-government donations while his wife was secretary of state. The agreement didn’t place limits on donations from foreign individuals or corporations.

Between 2009 and 2013, including when Mrs. Clinton was secretary of state, the Clinton Foundation received at least $8.6 million from the Victor Pinchuk Foundation, according to that foundation, which is based in Kiev, Ukraine. It was created by Mr. Pinchuk, whose fortune stems from a pipe-making company. He served two terms as an elected member of the Ukrainian Parliament and is a proponent of closer ties between Ukraine and the European Union. –
geopolitics.co/2015/03/22/clinton-foundations-deep-financial-ties-to-ukrainian-oligarch/

In addition, during the same time period, and after Clinton’s tenure as Secretary of State, Pinchuk was under investigation for trading with Iran in direct violation of U.S. Sanctions against Iran, for which foreign nationals can be punished.

According to Newsweek, invoices from Pinchuk’s company show a shipment for $1.8 million in May 2012 for “seamless hot-worked steel pipes for pipelines” and destined for a city near the Caspian Sea.
www.newsweek.com/2015/04/24/hillary-clinton-runs-white-house-and-row-over-ukrainian-benefactors-trade-322253.html

And who was the FBI Director during the time that Clinton was Secretary of State? None other than Robert Mueller.

Mueller is investigating a $150,000 payment a Ukrainian oligarch made to the Trump Foundation during the campaign
www.businessinsider.com/mueller-victor-pinchuk-trump-foundation-donation-michael-cohen-2018-4

Between 2009 and 2013, including when Mrs. Clinton was secretary of state, the Clinton Foundation received at least $8.6 million from the Victor Pinchuk Foundation, according to that foundation, which is based in Kiev, Ukraine.

In 2008, Mr. Pinchuk made a five-year, $29 million commitment to the Clinton Global Initiative, a wing of the foundation that coordinates charitable projects and funding for them but doesn’t handle the money.

TUCKER Calling out the Clintons