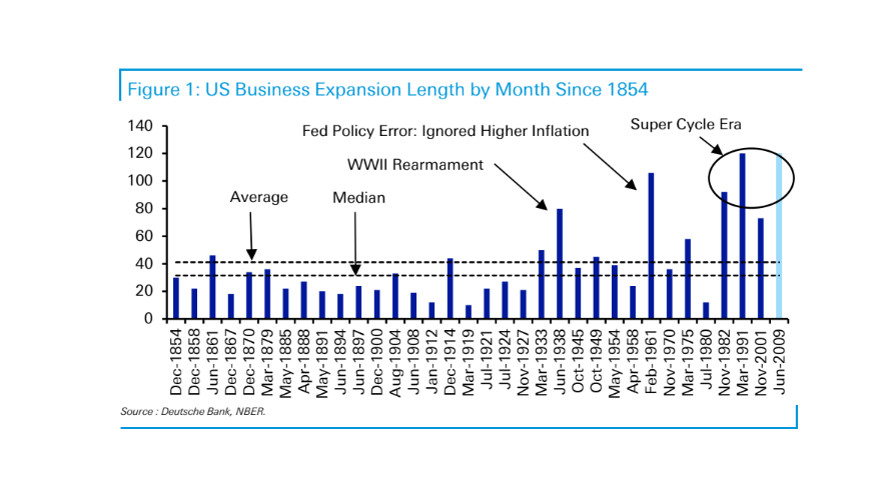 The 10-year old economic expansion will set a record next month by becoming the longest ever. Great news, right? Maybe not, say strategists at Deutsche Bank.

Prolonged expansions have become the norm since the early 1970s, when the tight link between the dollar DXY, -0.18%   and gold GC00, -0.19%  was broken. The last four expansions are among the six longest in U.S. history .

Why so? Freed from the constraints of gold-backed currency, governments and central banks have grown far more aggressive in combating downturns. They’ve boosted spending, slashed interest rates or taken other unorthodox steps to stimulate the economy.

“However, there has been a cost,” contended Jim Reid and Craig Nicol at the global investment bank Deutsche Bank. Read MarketWatch interview with Jim Reid

“In fact we’ve created an environment where recessions are a global systemic risk. As such, the authorities have become even more encouraged to prevent them, which could lead to skewed preferences in policymaking,” they said. “So we think cycles continue to be extended at a cost of increasing debt, more money printing, and increasing financial market instability.”

Even the current economy recovery is not all that it seems. Reid and Nicol said. It’s been the weakest of the 11 expansions that have taken place since 1949.

“This could hint at the extraordinary lengths global authorities have gone to ensure this recovery continued,” they wrote. “Liquidity and intervention has been enormous and this has flowed into assets.”

The silver lining, sort of? Reid and Nicol don’t see danger right over the horizon.

They say the situation can go on until the current era of low inflation gives way to rising prices or leading countries like the U.S. run into a debt-funding crisis. It could be several years or even much longer before that happens.

“One could make a compelling argument that regular recessions strengthened the economic success story as they acted as a natural cleansing mechanism ensuring an efficient allocation of resources and preventing the cumulative build-up of inefficiencies that could have arisen without regular downturns,” Reid and Nicol wrote.