This is a second video from my sister on #EllicotCity Main Street. This is as high, if not higher than 2 years ago. She is safe for now, no idea if everyone made it out of the 1st floors. @WJZDevin @wjz @FOXBaltimore @CairnsKcairns @wbaltv11 @weatherchannel: video via Kali Harris pic.twitter.com/KOQUH0aBwp 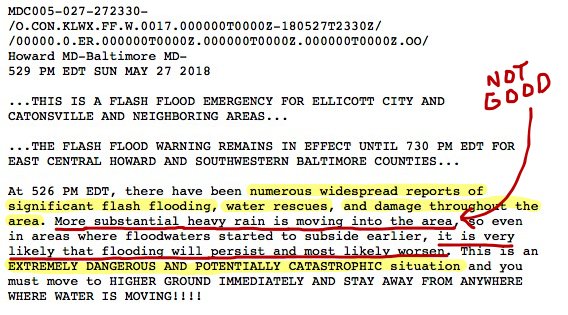 NEW VIDEO: 3:10pm on #EllicottCity Main Street via my sister Kali Harris. She is safe, but shaken. She has an evacuation plan if the building becomes compromised. @WJZDevin @FOXBaltimore @weatherchannel @CBSNews @wjz pic.twitter.com/CPZBrZcgrm

…THE FLASH FLOOD WARNING REMAINS IN EFFECT UNTIL 745 PM EDT FOR
SOUTH CENTRAL BALTIMORE COUNTY AND BALTIMORE CITY…
At 533 PM EDT, emergency management officials reported at leat
five roads closed due to high water. Around 3 to 4 inches of rain
has fallen and an additional 1 to 2 inches of rain are expected
within the next hour.
PLEASE SEEK HIGHER GROUND NOW. Flash flooding of low-lying areas
near creeks and streams as well as urban areas will continue this
evening.