What began as a TSA request for airline passengers to put liquids, gels and aerosols in clear plastic bags has expanded to schools, and sports stadiums throughout the country without so much as a whimper from a compliant public.
Logically, the next step is for DHS-run police departments to convince citizens to put their drivers licenses and registrations in clear pouches for government officials.
To help convince Americans to put their drivers license and registrations in clear pouches, Minnesota’s Department of Public Safety (DPS) has instructed 12 law enforcement agencies to give motorists “Not-Reaching Pouches.”
The Feds always like to start small by targeting one state at a time, just like digital drivers licenses. In 2017, DHS and IDEMIA (formerly MorhpoTrust) helped convince Iowa to become the first state to use digital ID’s. 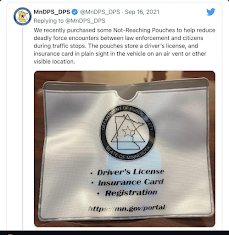 Much like Iowa’s DOT, Minnesota’s DPS claims that “Not-Reaching Pouches” are for public safety and will help reduce deadly force encounters between law enforcement and citizens.
Minnesota’s DPS is essentially saying that police are less likely to kill motorists if citizens comply and use clear pouches.

“We are continually looking for ways to reduce deadly force encounters as these instances can be catastrophic for police officers and community members,” said DPS Assistant Commissioner Booker Hodges.

How does law enforcement, a profession that trains its employees to kill people twice a year, convince motorists to use “Not-Reaching Pouches”?

“Our troopers, along with several law enforcement agencies across the state, want to make it easier for drivers to store the information and for law enforcement to see when motorists are reaching for documents.”

DHS wants the public to believe that instead of meaningful police reform all we actually need are see-through ID pouches to stop police from killing motorists.

DHS’s Division of the Minnesota DPS is allegedly meant to “lead the unified state effort to keep Minnesota secure and prevent acts of terrorism.”

As DHS puts it,

“The Minnesota Department of Public Safety Division of Homeland Security and Emergency Management wants every Minnesotan to know they have an opportunity — in fact a responsibility — to help keep their community safer.”

DHS’s very existence is meant to maintain a climate of fear and public compliance. From their “If You See Something, Say Something” campaign to their Office for State and Local Law Enforcement (OSLLE). The OSLLE’s stated purpose is to,

“Keep the law enforcement community up-to-date on Department-wide activities and initiatives such as If You See Something, Say Something, the Blue Campaign, Nationwide Suspicious Activity Reporting (SAR) Initiative (NSI), and the Department’s efforts in preventing terrorism.”

As I reported this past January, DHS’s Blue Campaign encourages hotel and motel workers to report guests who have committed one of nineteen suspicious things. Are you beginning to see a pattern yet?

From clear bags in airports, sports stadiums and now vehicles, it is ‘clear’ that law enforcement’s role in giving motorists “Not-Reaching Pouches” has little, if anything, to do with public safety and has a lot to do with furthering DHS’s goal of turning Americans right to travel freely into a federal right of maybe; but only if they grant you permission.

How long before the Feds require Americans to carry their ID’s in a clear pouch just to drive a car and submit to a background check on demand just like the TSA? After all isn’t that what police do every time they stop a motorist?

Could Do-Not Drive lists be far behind?