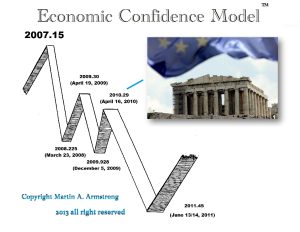 When the GAO report came out on the Quantitative Easing by the Federal Reserve, it uncovered a secret $16 trillion feeding tube from the Fed structured as revolving, low-cost loans to any bank (foreign or domestic) teetering on the edge. Amazingly, the audit showed the Fed started the loans in December 2007 – long before the public knew there was a dangerous financial crisis – and it lasted until at least July 2010.

Then by April 2010, that is when Greece had to ask the IMF for a bailout. What is amazing is how no banker was ever charged for the toxic financial waste they created while trading against their own clients.