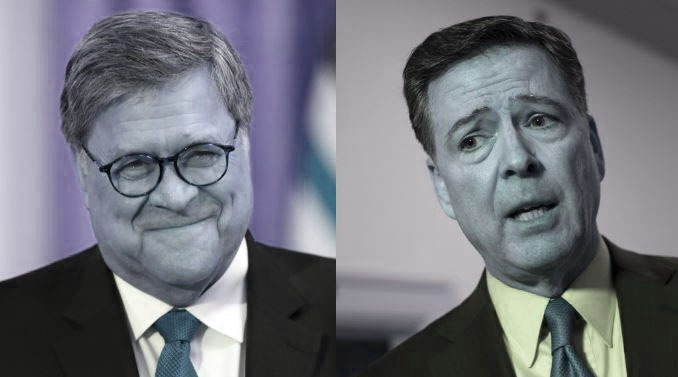 By Doug “Uncola” Lynn via TheBurningPlatform.com

Awakened Americans realize the nation’s system of justice now remains at a crossroads. Either the Deep State cabal including the likes Comey, Clapper, Brennon, McCabe, Clinton, Strozk, Page, Ohr, and others will continue on their book tours and talk show circuits – or they will face prosecution at the whim of U.S. Attorney General William Barr; as the country now awaits reports from Inspector General Michael Horowitz on FISA Abuse and corruption in the Department of Justice; U.S. Attorney John Huber on Clinton Foundation illegalities; and U.S. Attorney John Durham on the origins of Russiagate.

This, even as previous members of Team Trump, such as Manafort, Flynn, Papadopoulos, and others remain either incarcerated or with devastated lives for mere process crimes – and at the vagaries of the criminal cabal; even as the Mueller hearing revealed more of the Deep State’s men, including U.S. agent Joseph Mifsud, had lied under oath to the special counsel and, yet, still remain free today.

Who has the power?

Initially, it appeared the question was recently answered again as former FBI Director James Comey was, seemingly, arbitrarily absolved by Attorney General Barr  for what this blogger references as “Memogate”:

….DOJ Inspector General (IG) Michael Horowitz referred Comey for possible prosecution under laws governing the handling of classified information, however Attorney General William Barr has declined to prosecute – as the DOJ does not believe they have enough evidence of Comey’s intent to violate the law.

It means the memos illegally leaked by Comey will not be prosecuted because the former FBI Director didn’t mean any harm. It also means, ironically, that Barr absolved Comey via the exact type of mind-readingComey used to illicitly exonerate Hillary prior to the 2016 Presidential Election.

Is this just more evidence of the Deep State’s refusal to prosecute itself?

The New York Times first reported on the Comey memos in a May 16, 2017 article. Deputy Attorney General Rod Rosenstein appointed Robert Mueller as special counsel the very next day on May 17, 2017.

Do you believe in coincidences?

However, in Rosenstein’s order to appoint Mueller as special counsel, he cited Comey’s March 20, 2017 confirmation of Russiagate before the House Intelligence Committee.

Nevertheless, SPYGATE (via FISA Abuse) gave permission (i.e. cover) for the Russia Investigation (Russiagate) that allowed Comey’s (and other’s named heretofore) misdeeds (at least) and treason (at most).

In other words, all of the rats could hide behind their criminal acts by saying they honestly believed they were acting on behalf of national security – even as they lied to the President of the United States. To be sure, their defense would be similar to:

“Hey, intelligence claimed Trump might have been a Russian mole and we were just doing our jobs”.

Therefore, the apparent acquittal of Comey for “Memogate” now appears to add credence to Barr’s longer play of cornering the rats where they can least likely wriggle free.  Or, more clearly stated:  It is better to prosecute the Cabal, including Comey, on Spygate and FISA abuse anyway.

Are we watching the swamp about to be drained?  Or a television show with that particular plotline?

Time reveals everything and we can know them by their actions.