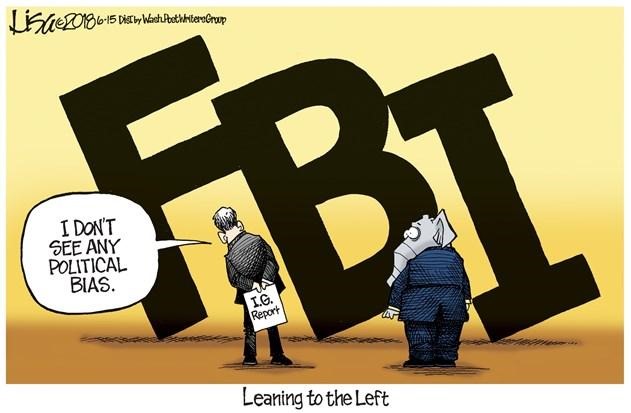 The U.S. Justice Department’s Office of Inspector General (OIG), led by Michael Horowitz, just issued a report, which concludes that there was no intentional misconduct or political bias by the FBI when it sought a highly controversial Foreign Intelligence Surveillance Act (FISA) warrant to monitor former Trump campaign adviser, Carter Page.  Instead, the report faults the FBI over numerous “omissions” and “inaccuracies” in the application process.

In his just-released report, Horowitz slapped a few wrists just like he did in his prior (yearlong) investigation into the FBI’s handling of the Clinton email probe and pointed out a number of inconsistencies with established FBI procedures, but he found no criminal wrongdoing by anyone in a senior position at the FBI.

It took over a year and millions of dollars of tax-payer funds for the OIG to issue its findings on potential FISA abuse.  What is most troubling is how the IG report is strongly reminiscent of the way former FBI Director, James Comey, disposed of the Clinton case on July 5, 2016 when he exonerated her and how Horowitz, in a similar manner, could not find any criminal behavior with the way Comey and other FBI officials handled the Clinton investigation.

When one reads today’s “Review of Four FISA Applications and Other Aspects of the FBI’s Crossfire,” it is remarkable how studiously the OIG avoids any accusation of criminal conduct on the part of government officials who prepared the FISA application.  If a common citizen without clout or government cover did the same thing, the arm of the law would come down hard on him or her in a heartbeat.  But when high-ranking government officials are involved, as happened in this case, their transgressions are simply deemed faulty and shoddy instead of criminal.  Even the village idiot in his most inebriated state can see through the charade and the whitewash.  Main Street Americans are offended at the blatant two-tier justice system and insulted that an internal probe within the DOJ would have us believe otherwise.

Below is a reprint of an article that appeared about a year and a half ago concerning Horowitz’s major probe into the FBI’s handling of the Clinton email investigation.  Note the similarities in the methodology and rationale he used in that investigation and those which he used in the current investigation into alleged FISA abuse by the FBI.  See how carefully he avoided accusing his colleagues at the FBI of any criminal behavior.  It’s obvious that the deep-state protects their own and Horowitz’s current report drives home that disturbing fact once again.  Further, it puts all presidents on notice that they serve at the pleasure of the deep-state, not the other way around. 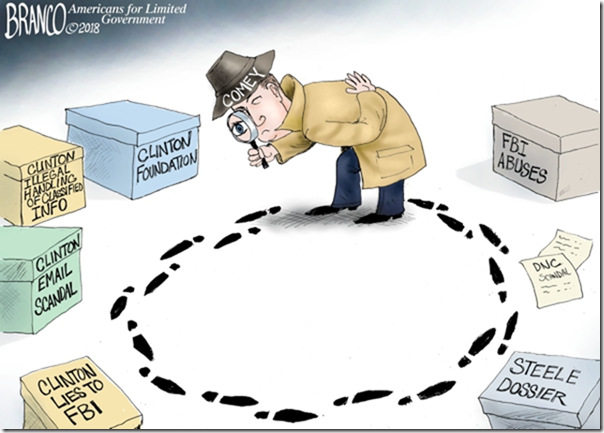 Comey and Horowitz – Birds of a Feather

So it took over a year for the Office of the Inspector General of the U.S. Department of Justice (DOJ) to issue its findings regarding the FBI’s handling of its probe into Hillary Clinton’s emails.  When one looks at the results, it is difficult to understand why it took that long.  Many of the facts upon which the report is based were known to the general public some time ago.  Nevertheless, the report does include several disturbing revelations such as FBI agents accepting gifts from news reporters and Ex-FBI Director James Comey using his personal email account to conduct FBI business.  But what is most surprising is how the presentation of the IG report is strongly reminiscent of the way Comey disposed of the Clinton case on July 5, 2016 when he exonerated her.

At every turn, Inspector General Michael Horowitz plays down internal decisions of how FBI investigators managed the Clinton case, such as the granting of immunity to a number of Clinton associates, or allowing Clinton’s attorneys, who were also witnesses, to sit in on her interview with FBI agents.  He attributes these decisions to investigatory discretion that were not in and of themselves that unusual nor were they outside the bounds of exploratory tactics used by the FBI in other cases.  He sees no untoward bias affecting these decisions.  The IG cites numerous instances where the FBI opted for a milder instead a more robust investigatory approach.  To wit, the IG report says investigators:

(Please note the extraordinary combination of courtesies granted to Clinton and her associates by FBI investigators that are seldom, if ever, extended to average Americans, who have little or no political pull.)

The IG report understates each decision by FBI agents to adopt a soft rather than a more intrusive investigatory approach.  The following rationale is given for doing so:

“The question we considered was not whether a particular investigative decision was the ideal choice or one that could have been handled more effectively, but whether the circumstances surrounding the decision indicated that it was based on considerations other than the merits of the investigation. If a choice made by the investigative team was among two or more reasonable alternatives, we did not find that it was improper even if we believed that an alternative decision would have been more effective.”

In other words, the IG addressed each investigatory approach on its own merits and made a determination whether a decision to follow a certain probative path was warranted based on similar decisions made in prior FBI investigations.  What the IG report fails to do, intentionally or inadvertently, is piece together all the individual decisions made by FBI investigators in their handling of the Clinton case in order to determine whether a pattern emerges regarding the general thrust and validity of the overall investigation.  An honest evaluation of the efficacy and integrity of the cumulative probative approach should take into account all decisions made over the course of the Clinton investigation.  To quote Aristotle, “The whole is greater than the sum of its parts.”  When this is done, the pattern that emerges is obvious.  The investigation was rigged.  The IG chose not to see the elephant in the room and believes we can’t see it either.

The overarching decision-making process in the Clinton case is consistent with a preordained outcome.  It was a foregone conclusion that Clinton would never be charged with any crimes and this is clear by the way the case was handled.  Perhaps, one or two decisions to take a docile or restrained approach can be excused, but to have one decision after another follow the same timid pattern indicates that the Clinton probe was never treated as a serious investigation by law enforcement officials at the FBI.  To put it bluntly, the fix was in from the jump.

The lead investigators on the Clinton case elected to pursue the most benign probative approach available to them.  Because Horowitz couldn’t find a smoking gun, he concludes that there was no deliberate attempt to throw sand in our face.  As a result, FBI officials methodically let Clinton off the hook so she could run for the highest office in the land.  The IG couldn’t find a conspiracy to obstruct justice on the part of FBI managers in their conduct of the Clinton case although it is hard to see it any other way.

To make the report credible, Horowitz slapped Comey’s wrist a few times for violating well-established FBI procedures among other irregularities, but the IG report doesn’t come anywhere close to citing Comey for criminal behavior.  After reviewing the report, James Comey said he didn’t agree with it, but asserted that “this is how the process is supposed to work.”  That tells you all you need to know about the IG report because the methodology used in the report is taken right out of the Comey playbook.  Imitation is the sincerest form of flattery.  The similarity with Comey’s exoneration of Clinton is striking: sully the subject a little, but studiously avoid saying anything that could result in criminal prosecution.  In effect, Clinton and Comey were exonerated in a similar manner through prosecutorial malpractice.

First, Clinton had her minions destroy subpoenaed evidence. Next, Comey destroyed the integrity of the FBI by failing to indict Clinton on numerous criminal counts.  Finally, Horowitz destroyed the credibility of the Inspector General’s office by offering up a softball report to the public.  In other words, there has been a cascade of cover-ups by federal officials from the former Secretary of State to the former Director of the FBI to the current DOJ Inspector General.

Horowitz concludes that Comey was simply guilty of violating departmental procedures and protocols by intentionally circumventing his superiors on a number of occasions; i.e., announcing his exoneration of Clinton without first notifying Attorney General Loretta Lynch and her deputies and doing the same thing when he decided to notify congress that he was reopening the Clinton case eleven days before the presidential election.

Let’s face it.  There was never any intention of finding Clinton guilty of anything.  And to complete the farce, the IG wants us to believe Comey and other key officials did a fair and reasonable investigation on the Clinton case and were untainted by any political bias.  This finding is an insult to our intelligence.  Even the village idiot can see through the charade.

A Washington Post/ABC News poll released on July 11, 2016, six days after Comey exonerated Hillary Clinton found that 56% of American adults disapproved of the FBI’s decision, while 35% said they approved.  A Rasmussen Reports survey, released on September 5, 2017 shows 64 percent of likely U.S. voters believe Clinton is likely to have broken the law with her use of a private email server, while 30 percent believe it is unlikely she broke the law in doing so.  The results indicate a growing skepticism among Americans as times marches on and more information about the Clinton investigation comes to light.

The IG report will probably convince even more Americans that the FBI’s decision-making process in the Clinton case was not only wrong, but was also a complete whitewash.  The Clinton whitewash spawned another whitewash by an Inspector General, who couldn’t seem to find evidence of FBI corruption when it was staring him right in the face.

It obvious we can’t trust investigators who investigate themselves.  Birds of a feather flock together.  It’s what they do.  It is naïve to think otherwise.