Boy, I’ll tell you what folks: the verdict is in on Trump’s exceptionally ill-advised decision to pile fiscal stimulus atop an overheating economy amid a deficit-funded tax cut. And the verdict is “guilty” – of being stupid.
Of course being “smart” isn’t something anyone but Trump has ever accused Trump of being, so this comes as no surprise. We’ve written voluminously about what’s going on here and how it fits in with the necessity of keeping his nebulous promise to his base.
Consider, for instance, these excerpts from a piece we penned for Dealbreaker on Tuesday:
The problem here is glaringly obvious. Steady-as-she-goes growth is not only not acceptable under MAGA, it’s explicitly forbidden. There is nothing “great again” about growth that’s less spectacular than it’s been in the past. Growth that’s lower than yesteryear is the exact opposite of “great again” if you equate “great” with growth.
So come hell or high deficits, Trump is going to restore that bygone era of American “greatness” and in his Simple Jack world, that’s as “easy” as tax cuts and fiscal stimulus. And you know, if we weren’t where we are in terms of the cycle and we weren’t nearing what certainly looks like a peak in economic momentum, that might be fine. But we are where we are and so what he’s doing is going to juice things further in the short-run at the expense of the medium- and long-term.
I’m sure this is abundantly clear to most people, but in case it’s not, allow us to reiterate: piling fiscal stimulus on top of an economy that’s already running hot and then throwing in an unfunded tax cut for “good” measure is likely to end in tears.
This dynamic is one of the main drivers of the bond selloff that’s sent 10Y yields to four-year highs. If there were already worries about the possibility that a sudden uptick in inflation pressures could force central banks to hike aggressively for fear of falling too far behind, what Trump is doing is exacerbating those fears.
Long story short, this has the potential to short-circuit the “Goldilocks” environment by transforming “slow and steady” into “rapid and batshit” – or maybe “rabid badger” is more fun if you like crappy alliteration.
Next up will be higher deficits and rate hikes and tighter financial conditions and that’s obviously dangerous for markets, especially in light of stretched valuations and how accustomed everyone has become to well-anchored inflation and steady but not blockbuster growth.
This is creating a nightmare scenario for Jerome Powell as it could end up forcing the Fed to accelerate the time table on rate hikes and thereby effectively cut the market out of the loop when it comes to helping co-author the policy script. The withdrawal of that communication transparency with markets would be destabilizing enough on its own, but now you have to consider the very real possibility that the rookie Fed chair makes a mistake and accidentally hikes us straight into a recession. Whatever the case, the gist of the whole thing – and this is the point that everyone including and especially us have been making for about six months – is that Trump is going to bring this cycle to a quicker end than it would have otherwise met. 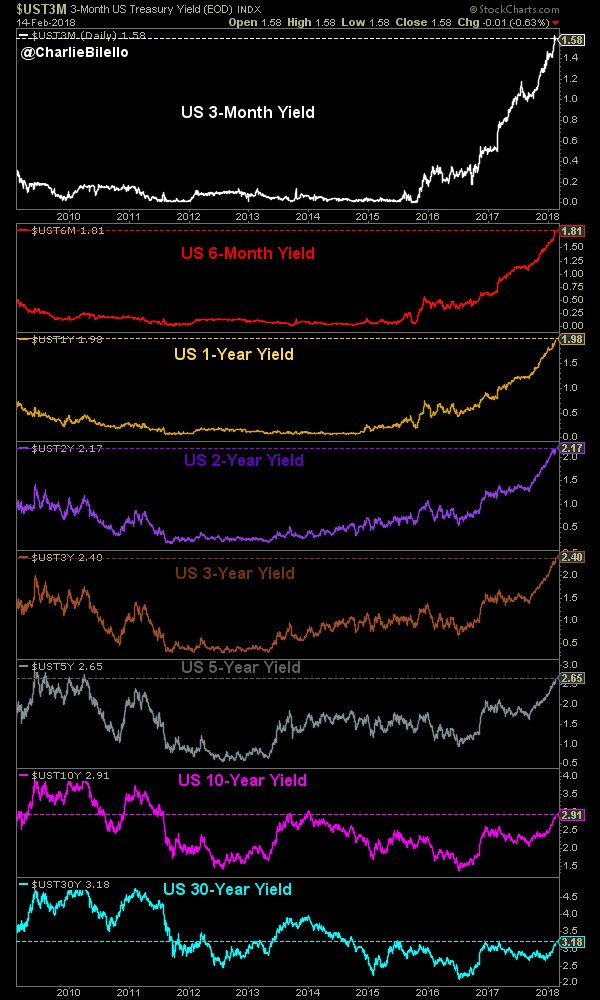 The January retail sales number is out, and what a number it is. Against expectations of a 0.3% increase, retail sales actually fell 0.2%, their biggest monthly decline in a year. Inflation rising. Sales falling. The worst macroeconomic combination: stagflation.
This sharp decline in retail sales takes place just as inflation is spiking, confirming that this could be the start of another dreaded stagflationary episode in which retail sales and CPI diverge to the point where they drag the economy into a recession. 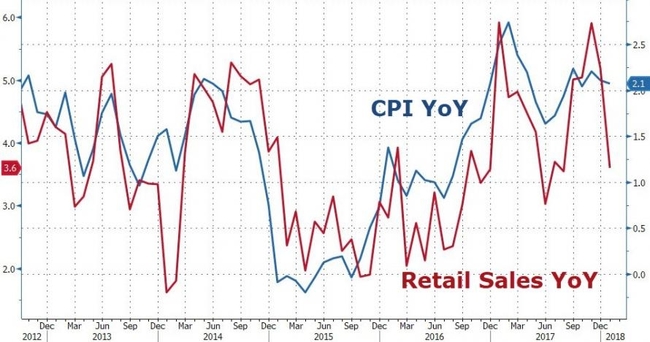 But the worst news: the US consumer is now tapped out, with personal savings just shy of all-time lows. Which means any further increases in spending will be reliant entirely on rising credit card usage, which in a time of rising rates and surging APRs, is virtually certainly not to happen. 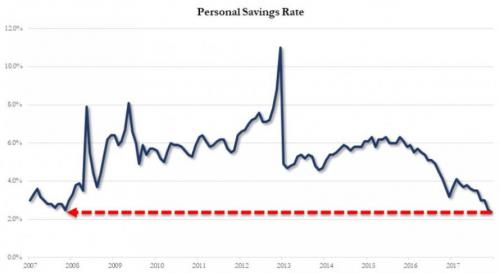 Is the Powell Put in play for the stock market? Bonds and the dollar are tanking, while gold is surging; so it sure looks like it is. But I think that the strike price is a lot lower than stock market investors think.

Democrats will claim that #Obama's deficits were necessary to get us out of the Great Recession caused by Bush. They will claim that #Trump's deficits overheated the great economy he inherited from Obama, causing another recession. Republicans will lose Congress and White House!