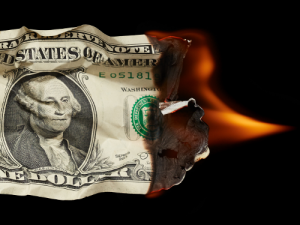 Maybe you’re looking for a fresh start. Or perhaps you’re looking to find a different job, or you’re trying to get out of the city. Whatever the case may be, when you’re looking for a new place to live there’s a lot to consider. And if you’re thinking of crossing state lines to find a new home, there’s one vitally important detail that you need to think about and research.
Most people don’t consider this, but you should really look into the financial stability of any state that you’re thinking about moving to. If worse comes to worse, and the economy collapses, you want to make sure that the state you live in is fiscally responsible. States that have high debts and low credit ratings are living on the edge. Any major economic event could push them into bankruptcy.
That means pensions could go unfunded. Public services like law enforcement and firefighting would be understaffed. The infrastructure of the state would crumble, and public education would be decimated. Taxes would likely be increased, which would only exacerbate the financial problems of the state because businesses would leave, leading to more unemployment and a smaller tax base. Obviously, all of these factors could contribute to the risk of civil unrest.
In other words, any financial calamity that occurs at the national level, would be magnified at the state level.  The economy of these states would fall into a tailspin, which would make life for the average person exceedingly difficult.
So which states should you avoid? There are three factors you should look out for. There’s the amount of debt as a percentage of the state’s GDP, the amount of debt per person (debt per capita), and the state’s current credit rating.

See also  PayPal teams up with the Anti-Defamation League to "uncovering and disrupting the financial pipelines that support extremist and hate movements," according to a joint statement.

The 10 states with the worst debt to GDP ratios are:

The 10 states with the most debt per person are:

And perhaps the most important factor is the credit rating of any given state. This gives you a good idea of how investors think a state will fare financially in the future, as opposed to a state’s current financial woes. According to credit rating agencies like Standard and Poor’s, as of last year the states with the five worst credit ratings are:

Though those ratings don’t look too bad, it’s important to keep in mind that those states have had sub-par credit ratings for a long time. There’s no indication that they’re going to get their act together any time soon, because they’ve been teetering on the edge for years. When the next wave of the economic collapse hits, these states (along with states that topped the first two lists, such as New York, Rhode Island, Massachusetts, South Carolina, and Connecticut) are going to be the first to feel the pain.
Think of it like this. If a storm arrived and threatened to flood a community, the homes that were built in low-lying areas are going to be underwater first. These states are like the houses near the river. So if you’re planning to move, look into the financial stability every state you’re considering, and seek higher ground.

1 thought on “Don’t Move to These States; They’re in Serious Financial Trouble”