Rapid run-ups in debt are the single biggest predictor of market trouble. So it is worth noting that over the past 10 years the amount of student loan debt in the US has grown by 170 per cent, to a whopping $1.4tn — more than car loans, or credit card debt. In America, 44m people have student debt. Eight million of those borrowers are in default. That’s a default rate which is still higher than pre-crisis levels — unlike the default rate for mortgages, credit cards or even car loans.

“The record debt isn’t fueled by housing like the last cycle. Housing debt has barely increased from the cycle low in 2013 and its down about $1 trillion from the $10 trillion peak in 2008. The driver of this cycle’s debt bubble is non-housing debt as you can see below. Student loans and auto loan debt increases are the drivers of record debt. The student loan bubble has been a long time in the making as government guaranteed loans boosted the demand for the product. Colleges have responded to this increase in demand by increasing the majors they offer.” fxstreet 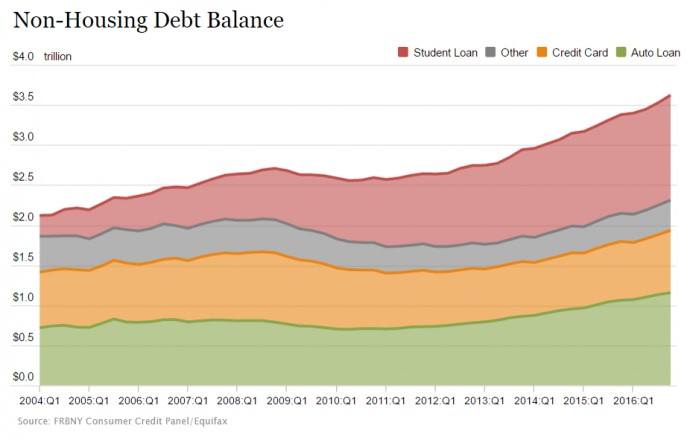 Source: fxstreet
“A graph released by a Federal Reserve Bank shows federal spending on student loans has spiked dramatically in the last five years, prompting some observers to voice concern about the consequences of such a steep and exponential hike. Federal student loans, while increasing, generally hovered at around $100 billion from 1995 to 2010, but spending since then increased tenfold to a whopping $1 trillion. Economists believe the amount of federal money allocated to student loans shown in this graph is highly unsustainable.” thecollegefix “Trump administration will not be able to hide from the student debt bubble. In an eerie echo of the housing crisis, debt is already flowing out of the private sector, and into the public. Before 2007, most student loans were underwritten by banks or other private sector financial institutions. Today, 90 per cent of new loans originate with the Department of Education. Socialisation of risk continues to be the way America deals with its debt bubbles.” Financial times

The impact of this condition is vast — felt in fewer students purchasing homes, starting businesses, investing and consuming. All of this hurts the future economy. And the overhang hinders more people as they go through life. In short, like housing in 2005, the institution of college education is firmly in the throes of a bona-fide bubble that will end just as disastrously.

READ  The Everything Bubble Burst! Stocks, Bonds & Housing Will Face A Catastrophic Crash
READ  Its the biggest bubble in history by a 10x magnitude. Its unbelievable what these psychos have done
843 views