There is renewed hope in the markets after central banks, most-recently the ECB and China, have added easing measures. The working narrative is that these will, once again, renew global growth and allow governments, corporations and consumers to go even more deeply into debt. But will the increase in liquidity work this time around?

Several arguments can be made indicating that the answer is “no”. It’s likely that this ‘liquidity pulse’ may provide a temporary boost to the markets, but not the real economy. This is an extremely hazardous combination.

The end of the cycle

As we explained in our June forecasts, the nascent economic downturn did not start as a result of  trade issues, but rather from the diminution of massive Chinese debt-stimulus, which ran from around late 2015 till July 2017. This stimulus was conducted through the shadow-banking sector and especially through the local government financing vehicles, or “LGFVs”.  During 2016, the size of the shadow banking sector tripled.

Funds from the shadow-banking sector were directed towards infrastructure investments and housing, supporting both the Ponzified Chinese economy and its related housing bubble. The effect of this debt-binge is clearly visible in a sharp rise in the Chinese leading economic indicator from late 2015 through the summer of 2017 followed by a rise in the indicators of other countries (see Figure 1). In essence, China pulled the world economy back from the brink of recession.

Why did China stop the stimulus? For two simple reasons. First, China has inflated a massive debt bubble used to finance unproductive investments, which has secondly resulted in the stagnation of China’s productivity growth (see Figure 2). 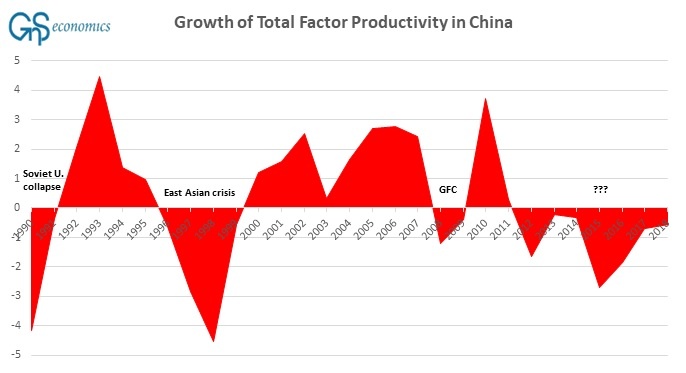 The Chinese leadership was almost-certainly acutely aware in 2017 that the relentless pace of debt growth was leading the country to a debt crisis. So, after the 19th Congress of the Communist Party of China in October 2017 (actually around two months earlier) they hit the brakes, and the world economy started to slow. This is clearly visible in the leading indicators above.

Early this year, Chinese leaders again panicked and started to push more debt into the economy. During H1, the debt-to-GDP ratio rose by 5.8 percentage points to 249.5 percent after falling for most of 2018.

What is notable is that, unlike in 2015/2016 when the economy quickly responded to the stimulus, the rebound has been lacklustre this time around. The combination of fiscal, credit and monetary stimulus early this year produced only mediocre growth of 6.2 percent in Q2, the slowest since 1992, and private data implies that the economic situation is worse that the official figures show.

China seems to have reached the point where a moderate (normal) stimulus does not support the real economy anymore, and a flat-out debt-binge, á la 2015/2016, would flare up a debt crisis. This, quite simply, means that the global business cycle is at its end.

Throughout this cycle, central planners have tried to postpone the downturn by all possible means. This marks the current expansion as the most manipulated business cycle, ever. This is actually rather understandable if one considers that the fate of the global banking system, the Eurozone, the legitimacy of Communist Party of China and even the very existence of central banks themselves possibly hangs in the balance.

Now, with the lead of the ECB and the Fed, central banks are again attempting to provide more stimulus. In their desperation, they are trying to wrestle the global economy back to growth with more easing.  But they overlook that:

The first point makes it impossible for any monetary easing to sustain the current economic expansion. The second makes any fiscal stimulus highly questionable (while it may help for a short while).

The third is the most crucial one. The European banking sector is especially unlikely to survive deeper negative rates, as several major European bank chiefs made a very clear in their recent extraordinary public communiques. We also already know that the asset purchase programs (“QEs”) increase the fragility in the banking system.

Central banks are undermining the foundations of the economy with more stimulus, especially in Europe. The ”open-ended” QE of the ECB will keep eroding financial stability in the Eurozone and the ”two-tier” system is unlikely to fix the profitability issues of banks. One might argue that the ECB is, in effect, demolishing Europe with its “bazooka”.

Recession, and the crisis, are coming

The re-escalation of the trade war since May has deadened corporate sentiment across the globe. Therefore, it has acted as an accelerator for the downturn, and even if trade disputes can be settled quickly, which is unlikely, the damage may already have been done.  Moreover, as we have contended for over two years, the real issues behind the global slowdown are more malevolent than simple trade disputes.

The ‘unconventional means’ of central banks have, quite simply, sabotaged the engine that drives economic growth, while massive and increasingly-unproductive debt stimulus by China has hollowed-out the global economy. If China and central banks manage to resuscitate the asset markets, but not the real economy, which is unfortunately quite probable, the end-result cannot be anything less than a crash, as in 1929.

Thus, while additional stimulus may provide some relief or even short-term euphoria for the markets, it will only be a mirage, a “Bull Trap”.  After a brief uptick, the global economy will continue to sink, until the fragile European banking system breaks and global stock markets and economy follow. And then, collapse.