To mark this moment in the history of insane stock prices where a tiny automaker with a global market share of 0.5% and a big loss in 2019 became the most valuable automaker in the world.

Shares of Tesla jumped 3.9% this morning to $1,130, which gave the automaker a market value of $210 billion. It thereby finally surpassed Toyota, the formerly #1 most valuable automaker in the world, whose shares declined 1.6% in Tokyo at the close today, giving it a market cap of ¥21,719 trillion – or $202 billion at today’s exchange rate.

That Tesla – a tiny automaker with a global market share of 0.5% (half a percent) that lost $862 million in 2019, when most automakers made money because those were the Good Times – has become a supernatural phenomenon led by a guy who is regularly seen walking on water, is proven beyond reasonable doubt by the double-WTF round-trip chart of the year (stock prices via YCharts): 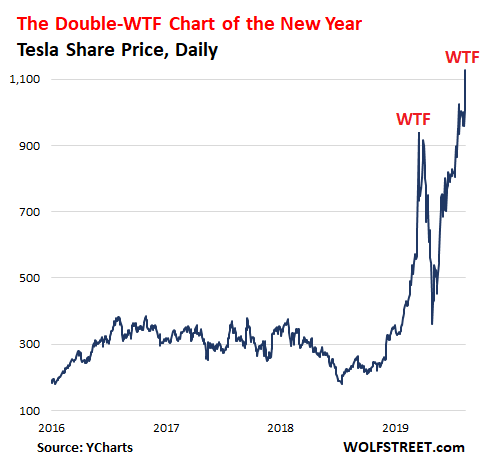 Tesla has gained $143 billion in value since March 18 this year, more than tripling its value from $66.6 billion to $210 billion in the three months during which the Fed threw nearly $3 trillion at the markets to accomplish precisely this kind of feat. And the people and algos that buy the shares have been outdoing even themselves to accomplish what the Fed wanted them to accomplish.

Tesla is burning large amounts of cash and constantly needs to raise new cash to burn. And so, on February 13, it raised over $2 billion from investors by selling them more shares. That will keep the company fueled for a while.

When investors are so eager year-after-year to hand the company new money to burn, while driving up the share price, the company is under no pressure to ever stop its cash-burn machine. It can just keep burning those investors’ cash, and Elon Musk can continue walking on water.

Now there is the possibility – and likelihood – that S&P Dow Jones Indices will induct Tesla’s shares into the S&P 500 Index at a ridiculous valuation – which is not to say that this valuation couldn’t get even more ridiculous, since tesla is a supernatural phenomenon, led by a guy who walks on water.

But it has shaken up the giants in recent years, and it got them to react and develop EVs, and they’re now all developing and building and selling EVs – and that’s a good thing, and kudos to Musk for accomplishing that. No one else before him had been able to shake up the industry like that.

But now, for the first time, Tesla has real competition in the EV segment – and that competition is piling more and more models later this year and next year, and in future years.

In terms of Tesla beating Toyota as the most valuable automaker, here are some fun data points that the market, of course, couldn’t care less about: