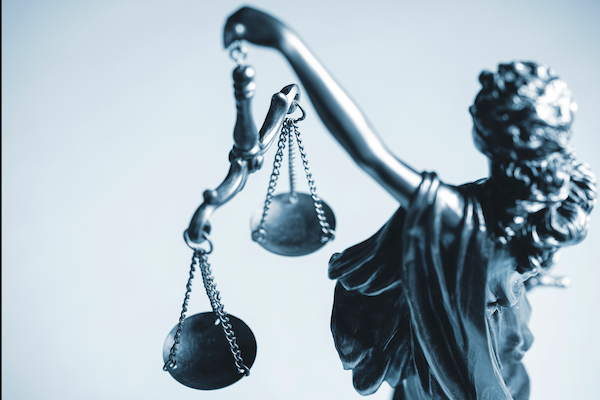 International Man: What is the role of a justice system in a society, and what should the State have to do with it?

Doug Casey: In my view, what really holds a society together isn’t the laws enacted by legislatures or dictators, but peer pressure, social opprobrium, and moral approbation. In general, society is pretty self-regulating. It’s why people pay their bills at restaurants even though there’s not a cop at the door. Criminals are the exception, not the rule—although, it must be said, they naturally gravitate towards the government.

When somebody commits a crime, there’s a trial to determine what harm has been done, who should be compensated, and so forth. Courts determine these things. But I would argue that the state is not a necessary part of any of this. Society, like markets, tends to be self-ordering.

I could live in a society like that—it would be a vast improvement over what we have now. A proper court system, with either arbitrators or judges and juries system, would be part of it. But I’d go on to argue that juries and courts should be privatized.

International Man: What would a privatized justice system look like? Would it have juries?

Doug Casey: There might be either arbitrators, or juries, or both. The jury should be composed of independent thinkers who aren’t easily swayed by rhetoric or pressured by groupthink. Today, however, they’re just random people who aren’t clever enough to avoid jury duty.

In theory, juries can counter the tremendous power of judges. Judges today are either elected or appointed. If elected, they have to campaign like any other politician and are subject to the same perverse incentives any other politician is. If they are appointed, it can be even worse. Appointees are often just collecting political favors. While they’re allegedly more independent, in many ways, they’re even less accountable.

In theory, a jury is a good counterbalance to the power of the judge. You need some way to weigh the facts and decide who’s in the right. But the way juries work in the US today is far from optimal. It used to be that a jury could easily overturn any law. The process was called jury nullification, and it was an effective way for the common people to keep legislators under control. Today, however, it’s really a dead letter.

Today’s juries amount to a form of involuntary servitude. You get your notice for jury duty, and you either have to serve, whether you want to or not or come up with excuses the state will deign to accept.

Most productive people feel that they have more urgent priorities in their lives than helping decide court cases that can go on for months. So the type of people who end up serving on juries these days generally have nothing better to do or for whom the trivial fee they pay is good money. Hardly the kind of person who should decide weighty matters, perhaps even life and death.

In addition, many trials center on highly technical concepts, and forms of evidence, that people rounded up from the highways and byways are simply unqualified to interpret.

Worse, there’s the jury selection process called voir dire. The notion is to give the attorneys of both sides the opportunity to remove a few individuals from the jury who might be biased against their case, thus ensuring a more unbiased jury.

See also  Doug Casey - We Are Facing An Economic Disaster

But in practice, it’s an interrogation process by which lawyers try to ensure they get a jury that will believe whatever they tell them. This usually means that anyone exhibiting the least bit of independent thinking or is prone to value justice over law enforcement will get removed and never serve on a jury.

The result is that the quality of juries today is several standard deviations below what it should be. Any intelligent person has opinions, and in this day of the Internet, almost any person’s opinions are easy to find out. No matter which way your opinions line up, one side or the other isn’t going to like them in any case, so you won’t make it past voir dire. Both the prosecution and defense like to see malleable jurors with easily influenced minds. As a result, the typical juror has no opinions other than those on the weather, sports, and American Idol. People who think in concepts are weeded out as troublemakers.

This process makes a shambles of the concept of a “jury of your peers.” The type of people they rope into jury duty wouldn’t likely be the peers of anyone now reading this. If I were facing a trial, I’d much rather be tried by twelve people randomly selected out of a phone book than by the type of people who get selected for jury duty.

If we’re to have juries, they ought to be truly juries of our peers—people who can understand you and the facts pertaining to your case. But we’re far from an ideal system. It’s worse than arbitrary; given that most of those employed by the justice system work for the state, and that it’s the state vs. an individual in so many cases, there’s a huge inherent bias on top of the whole problem with today’s stacked juries.

International Man: What is an ideal justice system in your perspective?

Doug Casey: It would be a more equitable system if judges and jurors were professionals who had to compete with each other on the basis of their proven records of intelligence, fairness, speed, and low cost. The victim and the accused would mutually agree on the judge and jury or arbitrators.

Separating justice and state would help eliminate the state’s ability to prosecute phony, made-up crimes, especially crimes with no victims. There needs to be an actual victim to press charges if the state can’t be party to a case. That alone would eliminate the wasted resources and trashed lives resulting from the US’s various wars against victimless crimes. No one could be criminally prosecuted for having unorthodox sexual preferences, using unpopular drugs, drinking on Sunday, or smoking in a private establishment. Or for evading taxes. It might surprise Americans to know that tax evasion is a civil, not a criminal, matter in most countries.

Most legal actions focus on matters of tort and breach of contract. It’s important to keep the laws simple and few, so ignorance of the law is impossible. Ideally, just two great laws:

The point is that justice has to do with righting actual wrongs that have been done to people, not enforcing laws and exacting arbitrary punishments. Today justice means enforcing the will of politicians and bureaucrats. A proper system of justice would focus on making the victim whole, not arbitrarily punishing the aggressor.

With privatized justice, someone would accuse another, both sides would choose an arbitrator (professional or otherwise), and those two arbitrators would agree on a third to make sure there were no tied votes. They would look at all the facts—not just the arbitrary subset of facts allowed by legal precedent and state machinations. That decision would not be about punishing anyone but about making the harmed party whole again.

The key concepts are justice and restitution, not punishment. Punishment, if you actually think about it, rarely serves any useful purpose; it just gives vent to base and reactive emotions. It may set a “good example” to deter future miscreants, but it definitely sets a bad example for society as a whole by institutionalizing and justifying cruelty.

International Man: Is there any hope for the current justice system?

Doug Casey: The whole system is highly politicized, which is only natural for something run by the state. Unfortunately, as the country increasingly looks to government as a solution—your only choice being to choose between so-called “right” and “left” politics. That’s going to make the current legal system even more dysfunctional in every way I can think of.

International Man: What are the implications of this for investors and businesses?

Doug Casey: I see people being convicted under ridiculous applications of the securities laws, tax laws, and more. The only area where things are becoming more rational and freer is the area of drug laws. It’s becoming clear to even the dimmest legislators and jurists that they’re as stupid and destructive as were those against alcohol during Prohibition.

In fact, almost all the administrative laws of the myriad of three- and four-letter agencies—ATF, FTC, EPA, SEC, FDA, etc., etc.—create bogus and even nonsensical “crimes.” Even if you aren’t convicted, if you’re targeted, it can cost you hundreds of thousands or even millions of dollars in legal fees, plus time, lost business, and damaged reputation. The system has become rapacious and Kafkaesque. And as the state grabs more and more power with each passing crisis, the risk of attention from state operatives increases, even for innocent and honest­ people. The trend is accelerating in a negative direction. If history is any guide, things will get worse until we reach a genuine crisis. That’s bad news for anyone with any wealth, especially if they have unpopular political views.

That has very serious implications. Not just for people in business and investors, but society itself. This is one reason I’m so bearish on the prospects of the current world order; not only are there decades-long distortions in the economy that have to be liquidated, but the whole legal system is rotten to the core. It needs to be scrapped—someone needs to push the reset button and restore justice as its guiding principle—and that, too, is a distortion that can’t be corrected easily or painlessly.

Unfortunately, it seems as if it’s the very worst people who have their fingers on “The Great Reset” button.

Editor’s Note: Unfortunately, there’s little any individual can practically do to change the course of these trends in motion.

The coming economic and political crisis is going to be much worse, much longer, and very different than what we’ve seen in the past.

That’s exactly why New York Times best-selling author Doug Casey and his team just released an urgent new video Doug Casey’s Top 3 Secrets to Survive and Thrive During a Dollar Crisis. It explains what’s to come and exactly what you should do to protect yourself. Click here to watch it now.