Interviewed in this video is Doug Noland a hedge fund industry veteran and financial blogger, of the Credit Bubble Bulletin

Economic research shows that in a recession, the Fed needs to cut rates at least 3% to get any stimulus in the economy…Not a big deal, right? They always cut rates more than 3%. In 2008 they cut rates from 5% to 0% immediately.
How can they cut rates by 3% if they’re only at 1.5% without going into negative territory? Well, they can’t. And at the Fed’s current projections, they still need 2 years until they get the Fed Funds Rate to 3%. That means the Fed is in a race between time and another recession. Which will come first in the next 2 years?
The answer: it doesn’t matter because both will happen. I call this the ‘Fed’s Paradox’. History shows that every time the Federal Reserve raises rates, it causes the economy to slow down or some kind of a crisis happens. 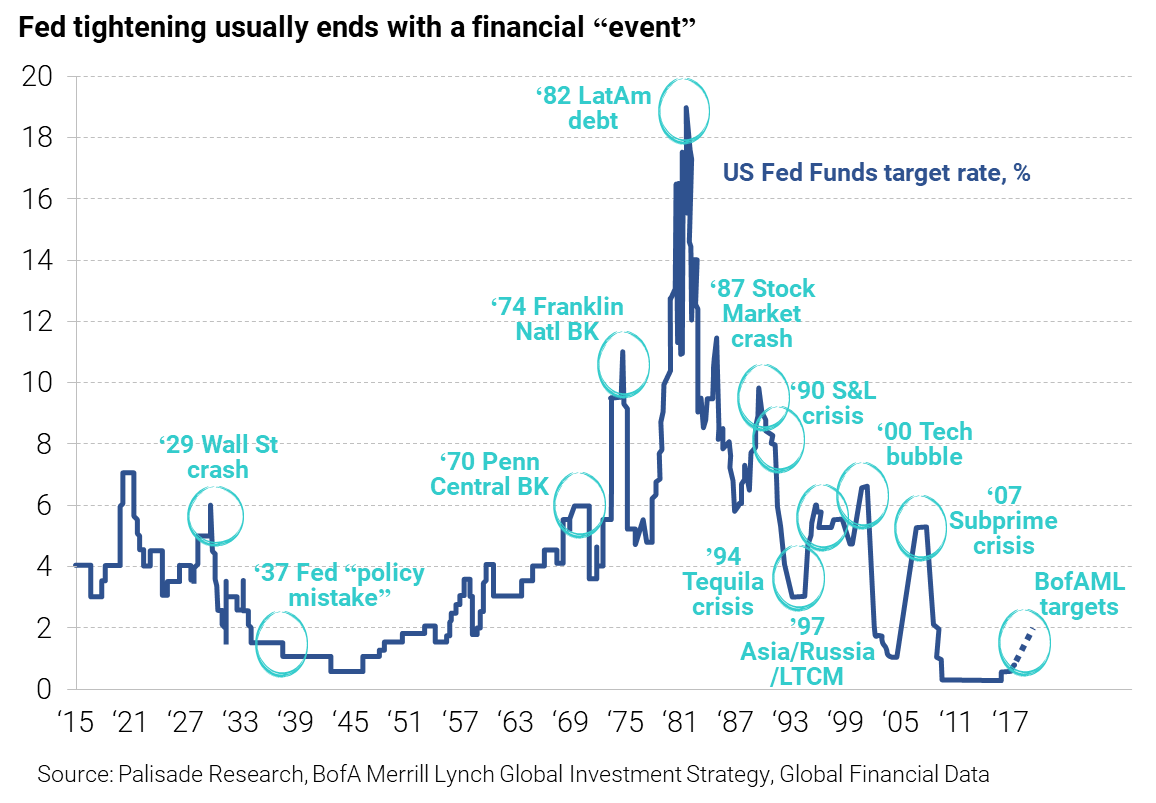 Trump should have leveled w/ the American people day one about the economy, but he did not. Did Dalio signal Trump is a one-term candidate? pic.twitter.com/mu16J9EgVC

Financial Times–5 hours ago
Low interest rates have helped sustain high levels of government debt and persistent budget deficits since the financial crisis, according to the OECD, but the “relatively favourable” sovereign funding environment “may not be a permanent feature of financial markets”. Fatos Koc, senior policy analyst at the OECD, cautioned …

Kaplan’s words come after this week’s report by Goldman Sachs indicated that US debt will turn unsustainable under the Republican leadership. … one of the largest ratings firms in China, Dagong Global Credit Rating, cut the US sovereign rating from A- to BBB+ on concerns that the country can fail servicing the debt. Peru ..

Bloomberg–11 hours ago
South Korea’s household debt rose to a new record in 2017, even as the government tightened lending terms to cool the property market. Household debt including credit purchases rose to 1,450.9 trillion won ($1.3 trillion) at the end of December, up 8.1 percent from the previous year, according to a statement from the Bank …

WLKY Louisville–21 hours ago
Kentucky’s underfunded pension systems are facing up to $80 billion in unfunded liabilities and rank among the worst funded pensions in the country. The shortfall is ruining the state’s credit rating and forcing deep budget cuts to other areas of state government, from education to public safety. SB 1 seeks to correct the …
Teachers face big cuts in pension plan that would save state $4.8 …
Lexington Herald Leader–17 hours ago
READ  GLOBAL WEB OUTAGE CLOUD CRASH
806 views