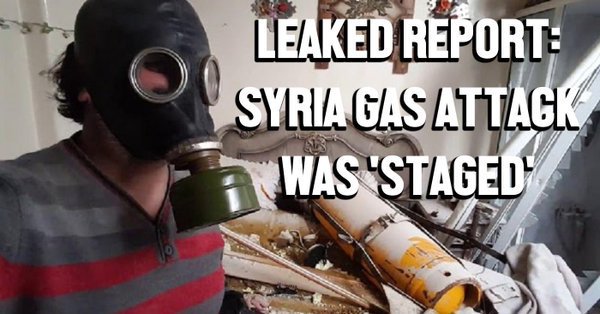 It was completely obvious right from the start that the claims of a gas attack in Douma were completely false.

First they said Sarin was definitely used but none of the “victims” displayed any symptoms of organo phosphate poisoning (uncontrollable vomiting, urination, defecation and turning blue).

Then they said that “chlorine was used”. But chlorine would not result in lots of dead bodies in a confined space because people would have run away from the gas cloud into the open air and not run into an enclosed basement where heavier than air chlorine would collect. Chlorine is not an effective way to kill people, you need lots of it and it takes quite a while for people to die. Victims start choking but are still able to run or walk away from the gas cloud to get to higher ground or open air away from the toxic gas.

The pictures of all the dead bodies had been arranged and manually placed there by the terrorists. Several of the pictures showed the same dead bodies in different positions – the terrorists were moving them around for effect. None of the dead bodies are covered with vomit, urine or faeces – they are all clean and suitable for public consumption. We do not know what with, or how, these people were killed. The terrorists hid the bodies and no autopsies could be performed by the investigators who arrived a couple of weeks later. You would have thought if these people had been killed by chlorine or some other chemical weapon, the terrorists would have told the UN chemical weapons investigators where the bodies were so that forensic examinations could be performed on them and the likely cause of death determined and reported.

The Jaish-al-Islam terrorists surrendered to Assad a few days after the Douma “attack” and the remainder of them were bussed out to join their Salafi / Wahhabi terrorist pals in al-Nusra infested Idlib. The White Helmets terrorists chose not to stay in Douma, and went with them.

A picture of some of the dead bodies claimed by the terrorists to have been killed by chemical weapons in Douma. 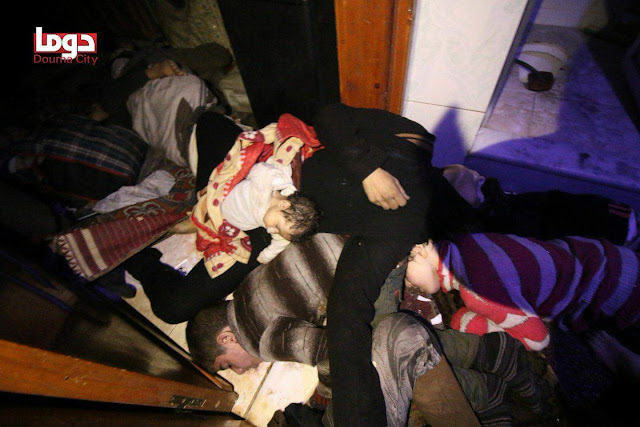 A video of the same scene and other adjoining rooms, showing 30 or more dead bodies.
The video was loaded to Youtube on the day of the claimed attack (April 7, 2018).
Warning 18+, some mildly Graphic scenes
youtu.be/DfQiFEyin_4

Nowhere in the scene is there any evidence of any vomiting, urination or defecation, which would be plentiful if Sarin had poisoned them.
The dead bodies are all remarkably clean and there is no soilage on the floors of the rooms.
We can therefore rule out Sarin, or any other organo phosphate, poisoning as the cause of their death in this location.
Neither are there any signs of the victims turning blue from oxygen starvation. Sarin kills from uncontrollable muscle spasms, which means the lungs stop working and the victims quickly die from lack of oxygen. None of the victims faces are blue. Their faces are all of a healthy normal reddish / brownish color.
We can therefore rule out Sarin as the cause of their death (not just in these rooms but anywhere else).

There are no signs of the victims suffering from chlorine gas poisoning. Chlorine gas kills slowly from choking, but none of the victims show signs of running, walking or scrambling to escape a gas cloud in the rooms that were supposedly being poisoned in. The bodies are all piled up very close together and show no sign of activity, or frantic efforts to escape this location when they died.
We can therefore rule out poisoning from a chlorine gas cloud in the room(s).

The OPCW interim report later ruled out Sarin being used in the Douma event.

OPCW whistleblowers have now confirmed the two “chlorine gas cylinders” were manually placed by the terrorists and there were no differences between the levels of chlorinated organic chemicals at the scene, and outside the scene of the alleged attack in the surrounding neighborhood.
Chlorinated organic chemicals are found in everyday domestic environments from using items such as bleach, water purification products, or other cleaning products. Only trace amounts were found by OPCW inspectors – as low as 1 to 2 parts per billion. Levels you would expect to find in any domestic location almost anywhere in the world.

We can rule out any chemical attack using chlorine killing these people.

N.B. As per the above – this video evidence (and lots of pictures from this video and perhaps other sources) was widely available ON THE DAY of the alleged attack and fundamentally demolishes any claims of these people being killed by chemical weapons as claimed by the Jaish-al-Islam and White Helmets terrorists who controlled Douma at the time.

The U.S. Intelligence Agencies MUST have seen this evidence and known that there was no chemical weapons attack from the photographic and video evidence available on the internet immediately after the attack.
If I and thousands of others saw these pictures within one to three days of the alleged attack the CIA and MI6 must have seen and known about them too. Other US, UK and Western Intelligence Agencies were no doubt aware of these pictures too.
So why did the US, UK and French governments lie about it and bomb Syria?

N.B. the victims in the underground medical clinic where the widespread video of the boy being hosed down with water was filmed also shows no evidence of Sarin organo phosphate poisoning.
Some of the victims did have breathing difficulties, from the dust cloud thrown up from conventional artillery / mortar shelling as parts of Assad’s efforts to liberate Douma from the terrorists using conventional weapons.

The dead bodies shown in the video were likely prisoners murdered by the US/UK/Saudi backed terrorists. Eye witnesses who lived in the immediate area later reported they didn’t recognize any of the faces of the dead victims in the pictures taken by the terrorists for Western media consumption. The terrorist prisoners had been captured some time earlier from nearby Alawite villages so of course the Sunni residents in Douma wouldn’t know them. The US backed terrorists murdered women and children to stage a fake “chemical attack” for the benefit of Western media and Western governments.

Of course the Presstitutes in the MSM didn’t care – they just spewed whatever total nonsense came out of the mouths of lying politicians and career criminals. The Presstitutes don’t do investigations or logical thinking or evidence. They are stenographers in bed with the criminals.

A few days later we then got some evidence from some actual Journalists in the alternative media and Robert Fisk who went to Douma to get first hand on the ground evidence of what had happened.
Witnesses reported there was no gas attack on the day in question (or any other day) and the medics who worked at the clinic where people were hosed down with water reported the same. Zero evidence of any gas attack. The whole thing was staged by the Jaish-al-Islam (Army of Islam) and White Helmets terrorists to get the U.S. to bomb Syria. 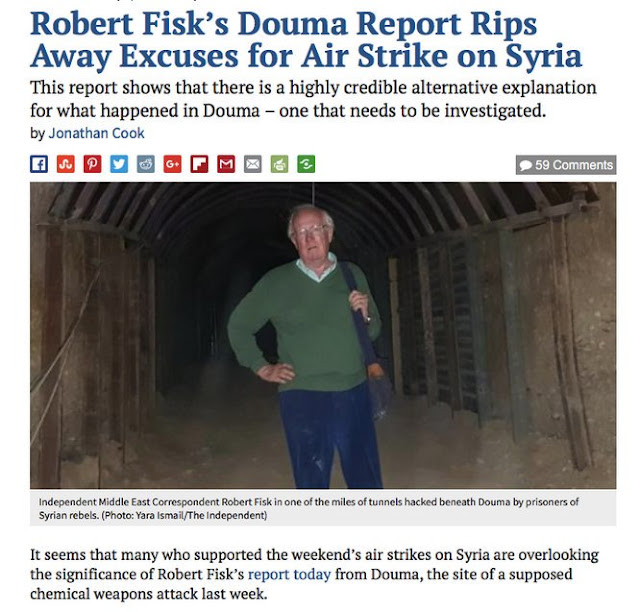 www.commondreams.org/views/2018/04/17/robert-fisks-douma-report-rips-away-excuses-air-strike-syria
A couple of months later, 20 eye witnesses (residents of the area) including the young boy shown being hosed down with water by the White Helmets went to the Hague and stated that no chemical attack had ever taken place. The boy had been told to go to the clinic and was then used by the White Helmets to make a fake staged video. 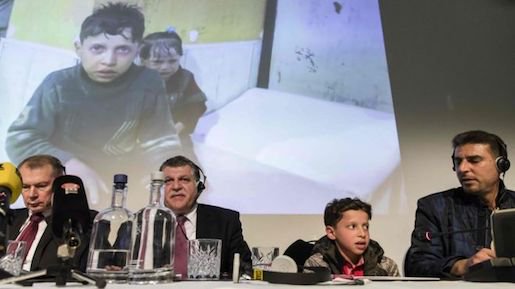 But the killer blow to the official narrative is that Assad had no motive whatsoever to use chemical weapons in Douma. What would be the point in killing civilians in a chlorine (or other) chemical attack when Assad was already winning, had already captured over 90% of the Douma and it would only take a short while more to take the rest with conventional means?

It would be the most stupidest thing Assad could possibly do and whatever else he might be, Assad is not stupid. He has survived over 7 years of brutal war against an invasion of tens (probably hundreds) of thousands of Western armed, trained and funded Salafi (Wahhabi) head chopping, Sharia and Caliphate supporting, barbaric terrorists.

Using chemical weapons would be the only thing that Assad could possibly do to start losing. It would bring down the wrath of the entire West against him and provide the excuse that they wanted to bomb him.

It would also turn the residents of Douma, and elsewhere in Syria, against him (most of the residents of Douma celebrated when they were liberated from the Western backed terrorists a few days later). Directly contrary to Western reporting, Assad has massive popular support within Syria. If Assad didn’t have massive domestic support his Army would have collapsed long ago and he would have been toppled by the Western backed Salafi terrorists.

The Douma False Flag staged event was very obviously a last throw of the dice by the Wahhabi, Salafi terrorists hoping the West would bomb Assad and save them.

As in Douma, there is no credible evidence whatsoever of Assad ever having used chemical weapons.

The April 2017 event at Khan Sheikhoun was also a false flag staged event by al-Nusra and White Helmets. There is no credible evidence of anyone dying from chemical weapons in Khan Sheikhoun, no evidence in the terrorists videos of victims with symptoms of organo phosphate poisoning, and “the rescuers” and “sample takers” operating with “sarin soaked bodies” or in “sarin soaked craters” or in the Jihadi doctor’s “medical clinic” were not wearing any proper protective clothing and would have died if Sarin had been present.

The August 2013 chemical weapons attack in Ghouta killed a thousand or more civilians with Sarin. This was caused by the terrorists firing crudely made sarin filled rockets on territory they controlled. The rockets did not have the range to come from Assad controlled areas and had to be fired by the terrorists in a deliberate false flag attack murdering civilians.

Murdering civilians is what terrorists do. Otherwise they wouldn’t be called terrorists and would probably be called something else.

None of this was reported in Western corporate media. None of the truth ever is.

The REAL reasons the US, UK and French governments lied about the non-existent “chemical weapons attack” in Douma and bombed Syria:

Trump Commits Another War Crime With Another Fireworks Display PR Stunt To Encourage The Jihadis & Prolong The War In Syria
ian56.blogspot.com/2018/04/trump-commits-another-war-crime-with.html 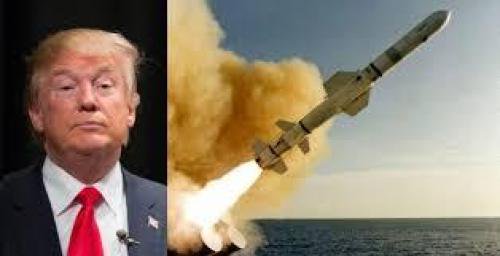