I know many of you are wondering what happens if Joe Biden wins the 2020 presidential election? What happens if Donald Trump wins?

So, I called my friend Doug Kass to basically “wargame” the next 12 to 24 months. He’s a veteran trader and investor, one George Soros tried to hire on several occasions. So, when he has something to say, I listen closely.

Doug and I went back and forth on a few issues, but the bottom line is the same: We are in for a very rough ride.

There is no magic recovery formula no matter who controls the government. Doug gave me a great quote that is appropriate for our times: “We are in a major bear market of political decency.”

Doug sent me one of his latest letters (and kindly let me share it with Over My Shoulder members). The two charts below show economic activity and consumer sentiment appear to be rolling over. 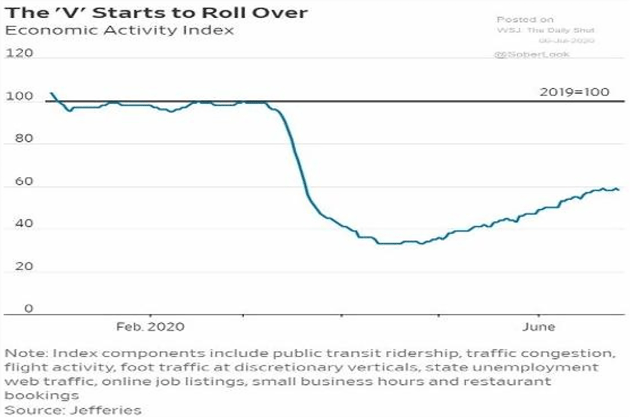 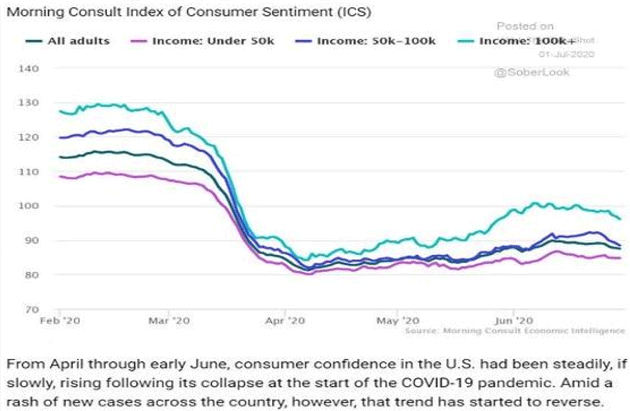 In aggregate terms, COVID-19 will likely have a sustained impact on the domestic economy—in reduced production and profitability—for several years, and in some industries, forever.

At the core of my concerns: important industries gutted.

For these industries, the damage is done, as they simply cannot survive the conditions they face. For these gutted industries, we face, at best, an 80% to 85% recovery in the years to come.

It should be emphasized that, in the case of some of these sectors, like retail, COVID-19 sped up what was already a secular decline.

It is not a pretty picture. Government programs and safety nets can help, but they don’t magically produce GDP and jobs.

Doug and I agree that investors will be seriously disappointed in corporate earnings over the next two years. However, given the Fed’s money-printing, the market can keep rising even as the economy rolls over.

But at some point, lower earnings will have a market impact. Don’t ask me when, because I don’t know. But we shouldn’t be surprised when they do.