It’s hard to believe, but electricity stocks used to be revered by investors the way FANGMAN stocks are today. To be more precise, they were bid up to lofty valuations, as were the Nifty Fifty group of US equities which included industrial giants such as the Generals— Motors and Electric, IBM, Kodak and Westinghouse. During this period, as the US’s industrial hegemony was ending, domestic electricity output grew twice as fast as the economy. But the Middle East Oil Embargo in 1973 slammed the brakes on that growth, slowing it to the same rate as GDP. Then, in the past decade, US electricity growth flattened to zero. From 2000 to 2020 real GDP grew 40% while electricity generation increased only 7%. Starting from 2008’s Great Recession real GDP rose 22% while electricity output was virtually flat. Electric utilities were once considered part of a flashy group of growth stocks by investors. They carried an unusual combination of relatively high dividend yields coupled with high earnings growth rates. We believe this relatively boring, out of favor group of stocks may surprise investors again with unexpectedly strong earnings growth. And unlike certain trends that take us by surprise, this is one that we can see coming fairly clearly.

But why the static sales? What about all the touted growth from sales to bitcoin miners or cloud computing centers? Well, it appears that structural changes in the economy and more efficient appliances offset those big hikes in consumption. (See Figure 1.) 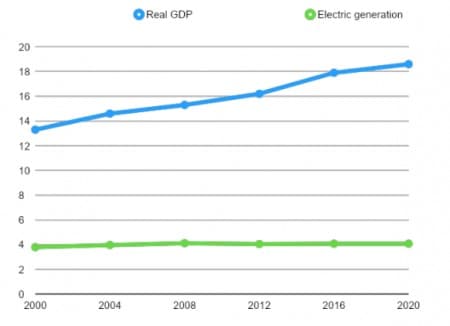 From these anemic growth trends one might conclude the electric industry is at death’s door. But not so. The electric industry does not make most of its money generating electricity. Its profits are derived mainly from delivering electricity to customers at regulated prices or by generating renewable electricity that sells at predetermined prices. Only the financial equivalent of chumps crank out massive numbers of kilowatt-hours simply to sell at wholesale market prices. As a result of the strange incentives of regulated industries (they get paid to invest capital) the electricity industry has only the most tenuous understanding of the wants of its customers.

This dreadful sales trend, however, could change and rapidly. If transportation were electrified or if building owners converted from fossil fuels to electricity or if industrial processes sought to eliminate fossil fuel use, electricity sales could grow again—plausibly going up by up one third, or even doubling. But, what’s the point of converting from direct fossil fuel usage to consumption of electricity produced by fossil fuels? And we all know how much the electric industry has complained about the cost of decarbonization and the operational difficulty of making the move. The industry took to the courts to thwart Obama administration efforts to reduce greenhouse gas emissions and we know that the Trump administration made no real effort to move the industry along. So what hope is there?

Take a look at Figure 2, which charts greenhouse gas emissions from the industry as well as electricity generation. Note that generation held steady while emissions declined significantly. 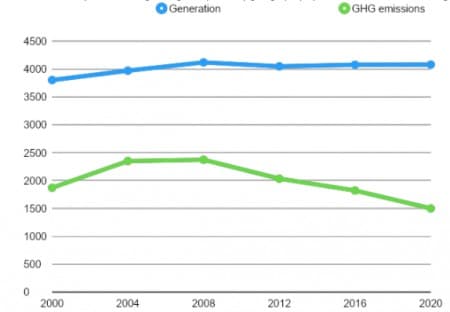 Let’s translate those numbers into the percentage change in greenhouse gas emissions per kwh generated. That number declined 29% from 2000 to 2020, but more interestingly, dropped 38% from 2004 to 2020. The drop was steepest during the Trump years. (Figure 3.) Yet carbon fuels still account for 60% of electricity production, meaning that there is more room to go. 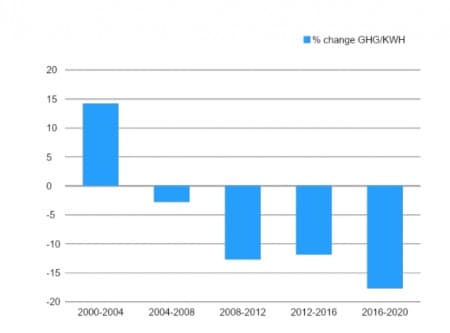 In other words, despite its indifference to decarbonization and opposition to environmental regulations, the industry’s generation has become cleaner. The Biden administration will attempt to hasten the process, with a combination of old Obama policies: environmental restrictions, regulation favorable to renewables and some tax credits. But as you can see from Figure 3, the industry decarbonized at a faster rate during the Trump years, when one would have expected retrogression.

We have outlined why existing electric companies are moving so slowly, argued that electricity producers can decarbonize faster, that they can raise the money without difficulty and that decarbonization would add little to the electric bill, incrementally. We believe that regulators and policy makers need to offer a combination of sticks to nudge action and carrots that management’s and investors would be loath to refuse. We also think that industry management would downplay many operational objections against renewables that they cite if offered attractive financial incentives. (See blog page, lenhyman.com for details.)

However, developers of new technologies and consumers who desire clean electricity may not wait for the last dollar of utility stranded assets to be recovered. Demand for fossil free electricity for transportation, for instance, could grow to the point that it could support its own electric supply system. To some extent, the assumption that demand for oil will decline slowly depends on the slowness of the existing electricity industry to meet new demands with an acceptable product—a slowness, in our opinion, prompted more by a too comfortable relationship with regulators coupled with the industry’s financial slow-walking rather than technical constraints. Our point is that the existing electricity industry may not set the timetable for a transition to more electrification of the economy. Transportation, with daily discussions of new battery electric cars, buses, trucks and ferries, may set the timetable. Industrial processes and agriculture will be next to tackle fossil fuel usage with green alternatives. Outside firms could go after the new, clean electricity markets and leave the old suppliers behind. The electric industry started out with different circuits for different users. That could happen again.

In short, we believe that the electricity business is poised to rebound. However, because of their recalcitrance to embrace newer, cleaner and most importantly cheaper energy sources, not all of our current group of utility companies will enjoy the growth. Only those who give the customers what they want. To readers of a business periodical this sounds rather ordinary. However, trust us. In the utility business, with its top down orientation, this is radical.

By Leonard Hyman and William Tilles