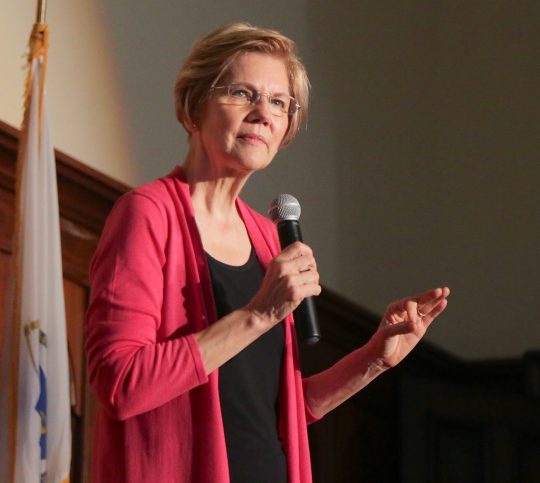 Elizabeth Warren is making it exceedingly clear that she is a socialist, and that is quite frightening considering the fact that she could potentially become our next president.  Unless some really big name unexpectedly enters the race, there is a decent chance that Elizabeth Warren could win the Democratic nomination in 2020.  And if she ultimately won the general election, the Democrats would likely have control of both the House and the Senate during her first two years in the White House as well.  So that means that the proposal that you are about to read about could actually become law in the not too distant future.

After AOC’s proposal to raise the top marginal tax rate to 70 percent received so much favorable attention, it was just a matter of time before Democratic presidential candidates started jumping on the “soak the rich” bandwagon, and the first one to strike was Elizabeth Warren.

When she announced her new proposal on Twitter, she dubbed it the “Ultra-Millionaire Tax”…

We need structural change. That’s why I’m proposing something brand new – an annual tax on the wealth of the richest Americans. I’m calling it the “Ultra-Millionaire Tax” & it applies to that tippy top 0.1% – those with a net worth of over $50M.

It would be bad enough if this was just a one-time tax on wealth.

Please note the use of the word “annual” in Warren’s tweet.  That means that the rich would keep getting hit with this tax year after year after year.

The Post reported that Warren has been advised by Saez and Gabriel Zucman, left-leaning economists affiliated with the University of California, Berkeley, on a deal that would levy a 2 percent wealth tax on Americans with $50 million-plus in assets. For Americans with assets above $1 billion, that tax rate would increase to 3 percent.

The newspaper, citing a person familiar with the plan, reported that Warren’s plan would try to counter tax evasion by boosting funding for the IRS, and by levying a one-time tax penalty on people with more than $50 million who try to renounce their U.S. citizenship. It would also require that a certain number of people who pay the wealth tax be subject to annual audits, the Post reported.

3 percent may not sound like a lot to many of you.  But over the course of a couple of decades many families could have their fortunes almost completely wiped out by this wealth confiscation tax.

According to economist Emmanuel Saez, this new tax would be imposed upon approximately 75,000 families and would raise 2.75 trillion dollars over 10 years.

Clearly this is a move by Warren to appeal to the progressive wing of the Democratic Party.  I really like how Zero Hedge made this point…

Elizabeth Warren has never been a friend to the wealthy. But in the age of Bernie Sanders and Alexandria Ocasio-Cortez, merely advocating for “holding the rich accountable” simply doesn’t penetrate like it did back in 2008. And that’s because, on the left flank of the Democratic Party, you’re not really a progressive unless you believe that the existence of billionaires is a policy error.

And surprisingly, there is actually a lot of public support for such a proposal.  In fact, a recent Fox News poll found that Americans overwhelmingly support soaking the rich…

Voters support tax increases on families making over $10 million annually by a 46-point margin (70 percent favor-24 percent oppose), and support a hike on those making over $1 million by 36 points (65-29 percent).

There is less support for a broader tax increase: 44 percent favor raising rates on those with income over $250,000, and a small minority, 13 percent, approves of an increase on all Americans.

Of course so much depends on how a survey is worded.  For example, I would be willing to bet that a survey would show that well over 50 percent of all Americans would back my proposal to abolish the income tax completely.

Over the coming months, Democratic presidential contenders are going to be continuously trying to one up each other with their promises to tax the rich and give out free stuff.  By the end, someone out there may even be promising to give free rides to the Moon to everyone.

See also  It's so blatantly hypocritical that it would be funny if it wasn't so stupid.

But if Elizabeth Warren really wants to be considered a serious contender, she needs to eliminate the ridiculous gaffes that have plagued her in the past.  For instance, she recently claimed that we have “two co-equal branches of government”…

Freshman Rep. Alexandria Ocasio-Cortez, D-N.Y., already has declared that the government has “three chambers of Congress,” the House, the Senate and the presidency.

Now, Sen. Elizabeth Warren, D-Mass., has claimed on Twitter that the government has “two co-equal branches of government, the president of the United States and Congress.”

“The Notorious RBG (Supreme Court Justice Ruth Ginsburg) is gonna be ticked off that she’s been forgotten again,” said a post on the Twitter news-aggregating site Twitchy.

And there is certainly no excuse for such a gaffe, because she used to be a law professor.

In the end, it is difficult to understand why so many Americans seem to want to march down the road toward socialism.  Because as President Trump has noted, Venezuela has shown us where that road leads…

“We’re looking at Venezuela, it’s a very sad situation,” Trump told reporters. “That was the richest state in all of that area, that’s a big beautiful area, and by far the richest — and now it’s one of the poorest places in the world. That’s what socialism gets you, when they want to raise your taxes to 70 percent.”

He added: “You know, it’s interesting, I’ve been watching our opponents — our future opponents talk about 70 percent. No. 1, they can’t do it for 70 percent, it’s got to be probably twice that number. But, maybe more importantly what happens is you really have to study what’s happened to Venezuela. It’s a very, very sad situation.”

Unfortunately, political proposals don’t have to actually make sense, and right now Elizabeth Warren is doing all that she can to win the progressive vote.