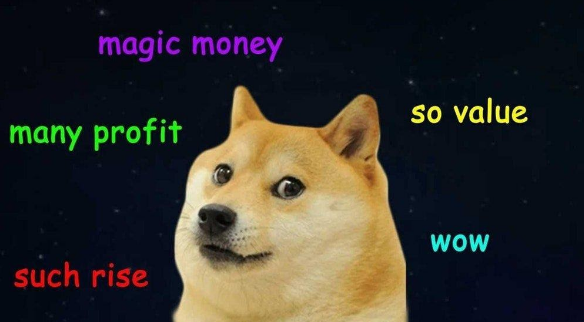 Maybe the biggest news about Elon Musk hosting the SNL freak-show on Saturday night is that he publicly admitted to have Asperger’s disease.  And if that’s not just another one of his cons, it raises an important question: is there any need to monitor public statements of a person who can move markets, if that person has a condition which may obscure his understanding of how it impacts other people’s perceptions?

Speaking of moving markets, while hosting SNL, King of the Pump and Dump schemes also known as Elon Musk decided to attack Dogecoin, the coolest crypto currency in the universe, for no particular reason other than he’s completely autistic.

Actually, I know why he did that: he called Dogecoin a hustle, and he’s totally correct in his assertion, because he’s been pumping it for months now. It takes a hustler to know a hustle.

As soon as Musk called it a hustle, Dogecoin price dropped.

Elon, people on the internet are trying to make an honest buck, man.

Hahahahahah. Crypto folks had been hyping up Elon Musk’s appearance in SNL with the possibility of DOGE will be skyrocketing. t.co/FSXZ47iJJd

Actually, everything is a hustle nowadays, and I’m being serious here. Have you seen Tesla stock?

Does that stock price make sense to you?

Something is very wrong when the market cap of the joke fake coin would have bought ALL the available silver on earth several times over.

The final act of the collective enforcement of insanity is going to be a real doozy.

For those of you who didn’t get it yet, here’s the deal:

This is a classical pump and dump.

Elon Musk pumped the stock and added buying volume, but the billionaire class dumped more shares than buyers could handle – but if they would have dumped their shares without the pump, it would’ve went close to zero..!!

Now Elon can say he didn’t pump the stock, because it actually went down – but it went down due to the billionaires selling massive shares to the suckers extra buying pressure, that enabled the billionaires to dump a freak load of coin thanks to Elon’s pump.

This was a massive pump and dump. I’m not saying that the coin is finished, all I’m saying it was a classic pump and dump scheme.

It might run up again and probably will – but the billionaire class sold at the top and they’ll buy back low. This is how you are getting hustled☺.

By the way, the number one rule is this: never try to understand the market and come up with rationales for market behavior.  If you have your own investment system and it works, never deviate and just make money; if that means investing in crypto right now, just do it, who cares what I think about it long term, just go out and speculate the heck out of it.

Here are 7 reasons I am not optimistic about Ethereum’s long-term future.

#1. It is not immutable and can be censored. The developers can roll back transactions and change the rules whenever they want. They can also be pressured by others – such as governments.

Know your risks. The truth about crypto currencies is that their value is set by the speculative interest of greater fools.

And I will have zero sympathy for people losing everything when the music stops.  That said, I am looking forward to laughing at the soy brained speculators crying and demanding to be made whole by FRN government bailouts.

All BitTrash (and FRN too) possess zero intrinsic value.

One, however, is backed by bombs and guns.

Transacting in crypto right now is like trading Pokémon cards.

You are valuing crypto wealth in DOLLARS…the very thing you are trying to get away from and cashing out in dollars is your only option, as it is not widely recognized as an alternate purchase method for goods and services.

Shorting crypto would be even worse than throwing money away on buying it.  We are in manic markets, you don’t make bets that make sense; you either follow the stupid people and pull some out on the way up, or you keep your money on the side for when it hits the fan.

1929: “When the shoeshine boy is giving stock tips, it’s time to get out of the market”

2021: “When SNL skits are driving prices on a meme coin, it’s time to get out of the market”

And here are a few words about bitcoin, the essential store of value in 2021: what really drove the price of Bitcoin in the early days was the scam exchange Mt.Gox.

Some basement dwellers made out well. Then the scam was outed.

The scam moved on to other exchanges like Coinbase.

Ledgers are good, but the blockchain stores mostly useless information. Why do I care where my payment came from before I received it? Do I care where and when a product I sold is sold again?

A Bitcoin block is essentially a dollar with a serial number, where each person who takes it writes their own wallet code on it. At first it seems to work. But then there is no space to write the next wallet code. So you attach a piece of paper to the dollar, so more codes can be added. After a few months, the dollar has a filing cabinet that needs to be dragged with it in order to spend it.

Some guy asks, why does anyone need to know that three months ago, wallet 80345 traded this dollar? The other guy says, because it is cool technology.

The only reason why this seems like a good idea, is because the filing cabinet is digital. But like the physical cabinet, the blockchain is getting very large. It won’t even fit on a phone or most computers sold today. Almost all new computers come with a 250GB SSD, rather than the 1TB mechanical drives.

We know Coinbase just records your “trade” and issues you an IOU. That way they don’t have to have actual Bitcoin to make you whole.

Which brings us back to the scam exchange Mt.Gox.

Are you starting to get it now?