Wild day in the markets. Emerging markets are getting crushed like a 1980s teenage nerd asking the head cheerleader to prom. As I write this, the EEM ETF is down roughly 3% on the day, and down more than 7% over the past week. 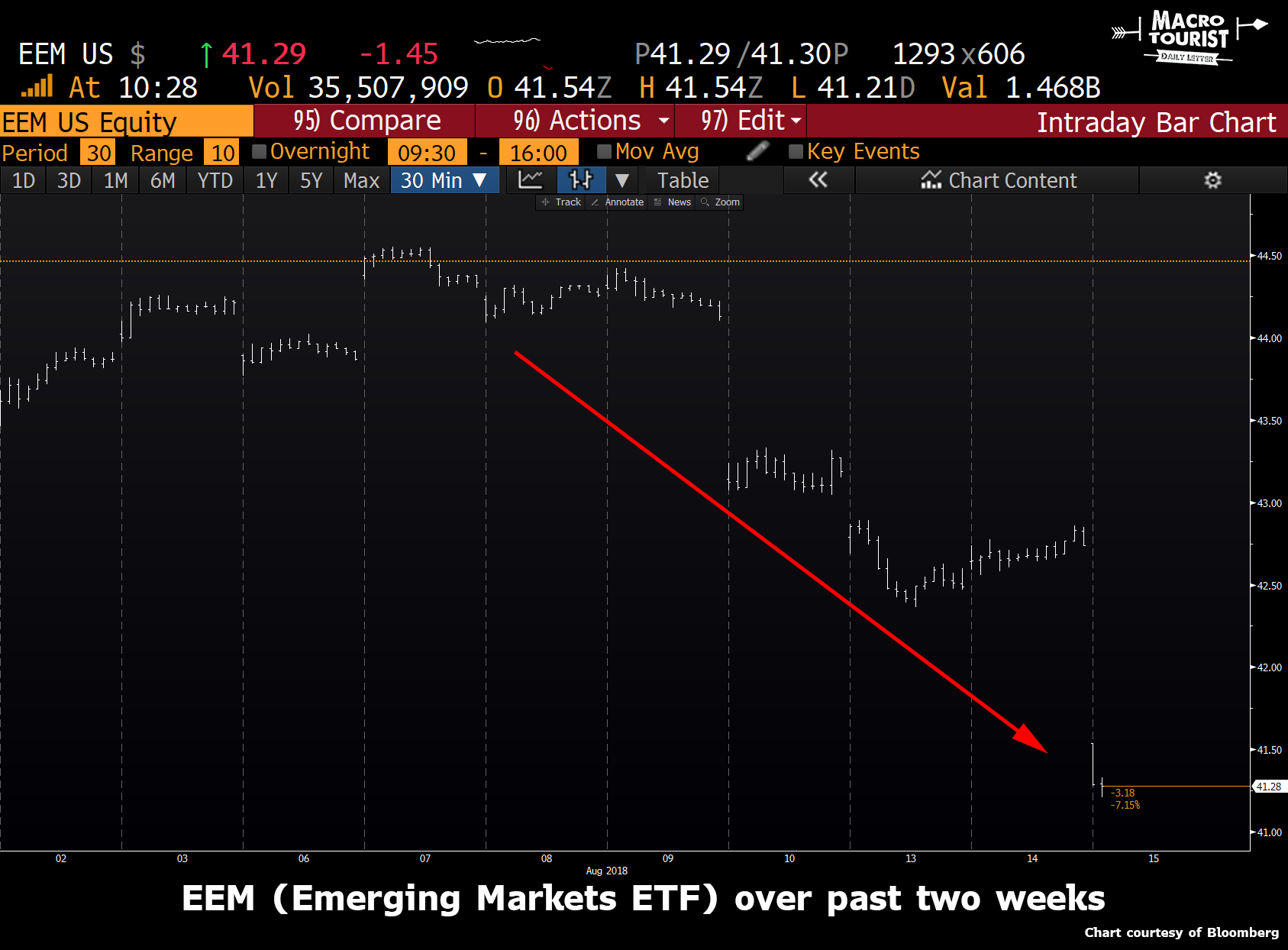 We’re past some simple mid-summer-illiquid shenanigans and definitely into the biting-on-the-pillow stage.

So what’s going on?

Well, some might blame EM market weakness on the debacle in Turkey, and although I am sure that’s not helping the situation, Turkey is a symptom – not the cause of recent EM problems.

UNDERSTANDING HOW WE GOT HERE

To understand what’s happening, we need to back up to the 2008 Great Financial Crisis. Back then the U.S. was the epicentre of the problems. Although the rest of the world wasn’t immune to the real estate madness, there can be no denying where it originated. America was patient zero. When the virus started spreading, faced with a financial system that was about to grind to a halt, the Federal Reserve embarked on a massive liquidity pump that flooded global financial markets with an unprecedented amount of US dollars.

It’s quaint to think about this now, but there was a time when emerging markets were complaining about the tremendous amount of US dollars sloshing around. In 2010, Brazil’s Finance Minister, Guido Mantega, scolded the United States and other countries who were “competitively devaluing” their currency through excessive liquidity injections.

At the time, the Brazilian Real was rising to levels that caused considerable economic pain for the Brazilian economy and they desperately wanted the US to ease up on the monetary accelerator. 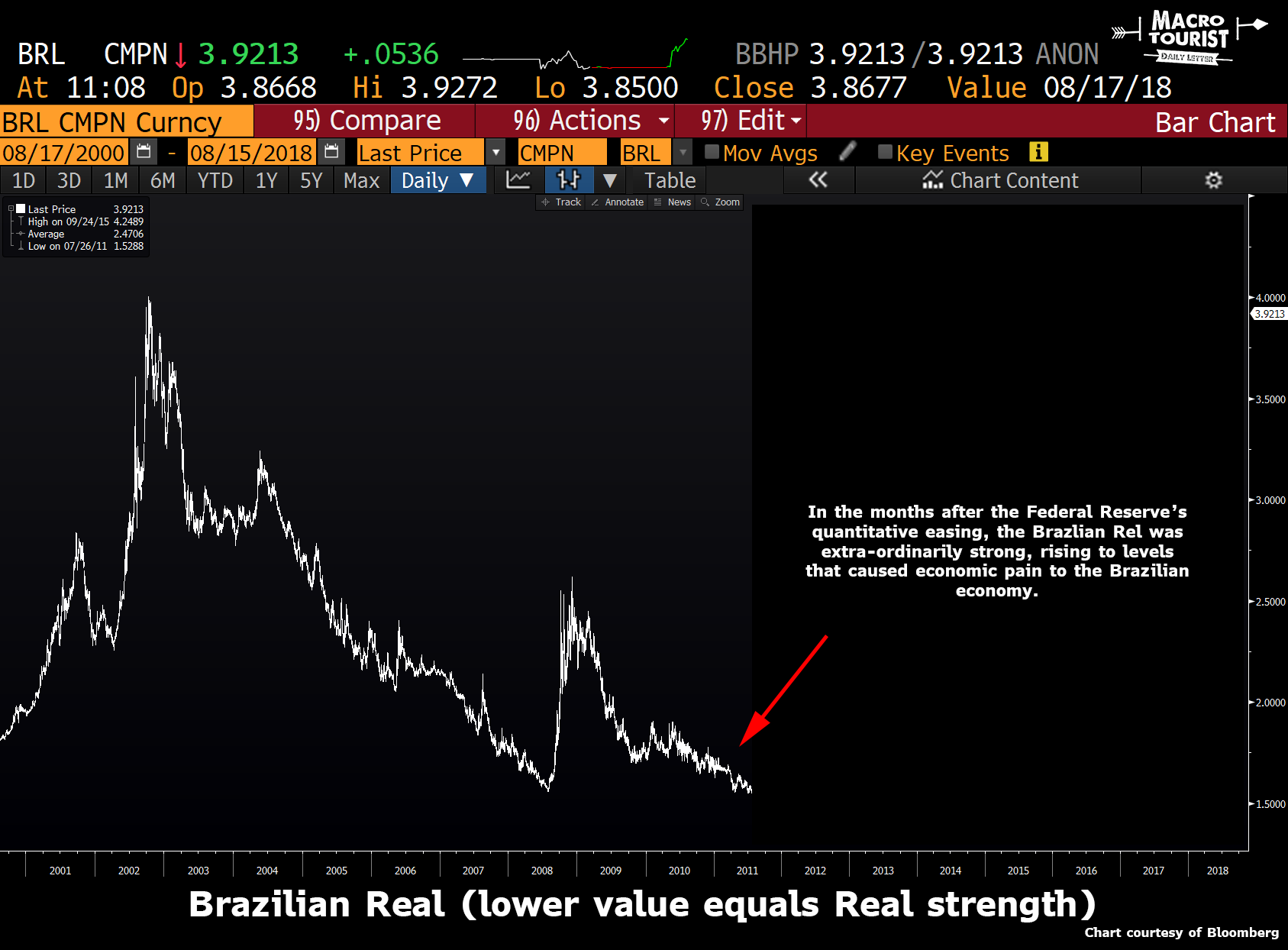 There was all sorts of talk by finance ministers about the developed nations “currency war” on emerging markets.

The reality is that it wasn’t a “currency war”, but rather a realization that desperate nations do desperate things when they are in trouble. The United States, and many of the other developed nations, had blown a massive real estate bubble, and when it collapsed, they force-fed liquidity into the global financial system to stop the contagion from spreading.

Emerging markets were collateral damage to their policies. And the developed nations did not care. Not even one little bit.

Yet instead of complaining, maybe the Brazilians (and all the other emerging market countries) should have taken the opportunity to sell Reals and buy as many US dollars as the market would let them. 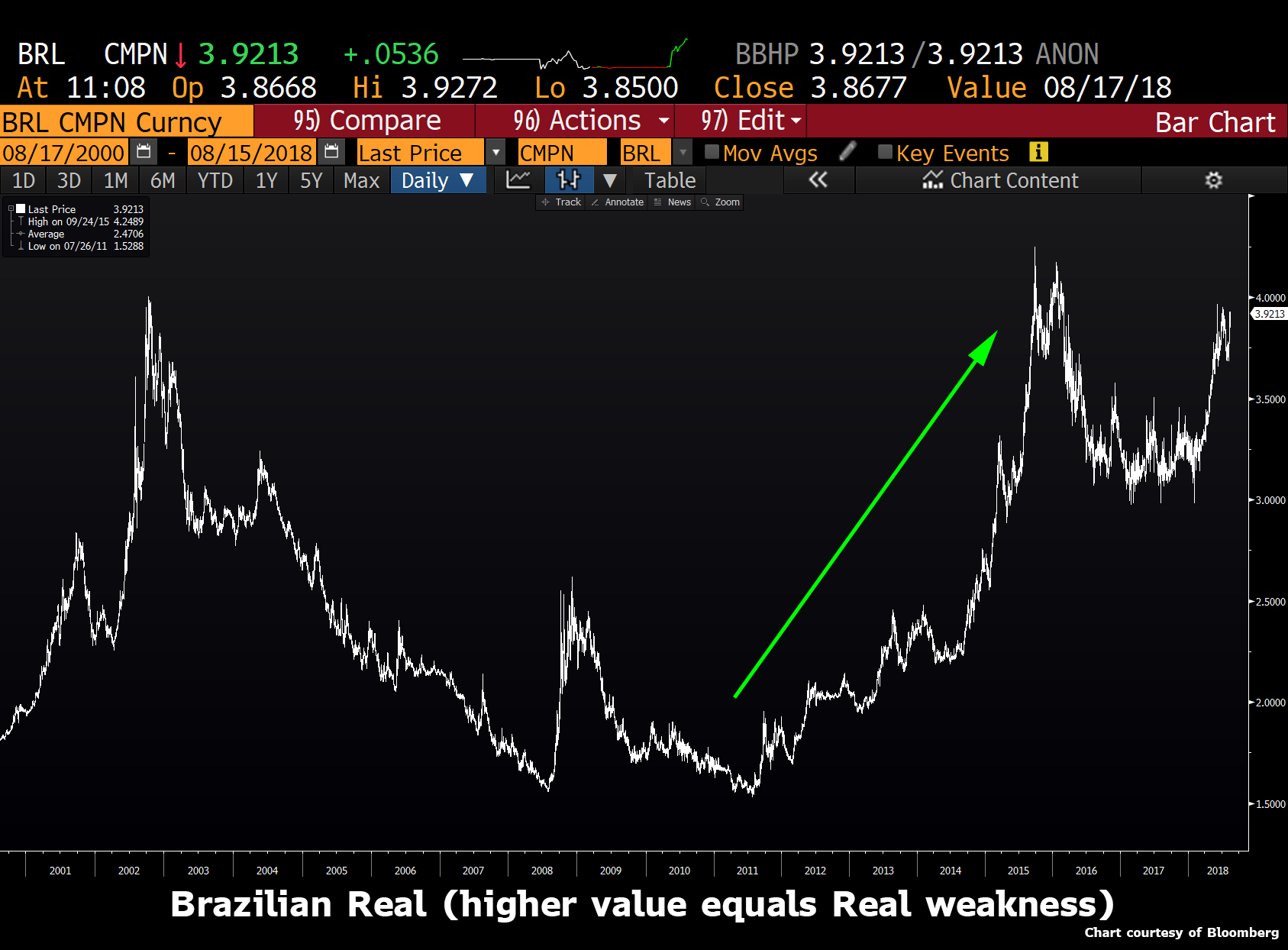 You know that saying, “better watch what you ask for? Because you might get it – good and hard!”

Well, that line was written for the Brazilian finance minister. After he complained about the too-strong-Real, the next eight years saw the Real collapse from 1.50 to almost 4. A nice big stack of USD FX reserves sure would be helpful right now.

But the Brazilian Central Bank didn’t hit the bid when they could, and now Brazil is suffering from the same problem that far too many emerging market economies are grappling with – severe capital outflows.

Why the sudden panic out of emerging markets?

It’s actually really easy to explain. It’s the exact same situation as 2010 – only in reverse. While in 2010 emerging market countries were complaining about too much US dollar liquidity, today there is nowhere near enough.

I THOUGHT THEY WOULD HAVE LEARNED THEIR LESSON

I must admit to being late to this story. I had thought all of these EM bears were overplaying the importance of US dollar liquidity. After all, surely the emerging market countries would have learned their lesson from the 1998 Asian crisis. Back then many of these countries had borrowed extensively in US dollars, and when their currencies started collapsing, their liabilities shot up in real terms through the roof – making a bad situation all the worse. No way, they would make the same mistake again…

In fact, not only was my gut reaction incorrect, but I have misjudged the extent of US dollar borrowing so badly, it’s embarrassing.

In a recent BIS working paper, Gauging procyclicality and financial vulnerability in Asia, the authors highlight the absolute stunning amount of US dollar borrowing by EM entities over the past decade: 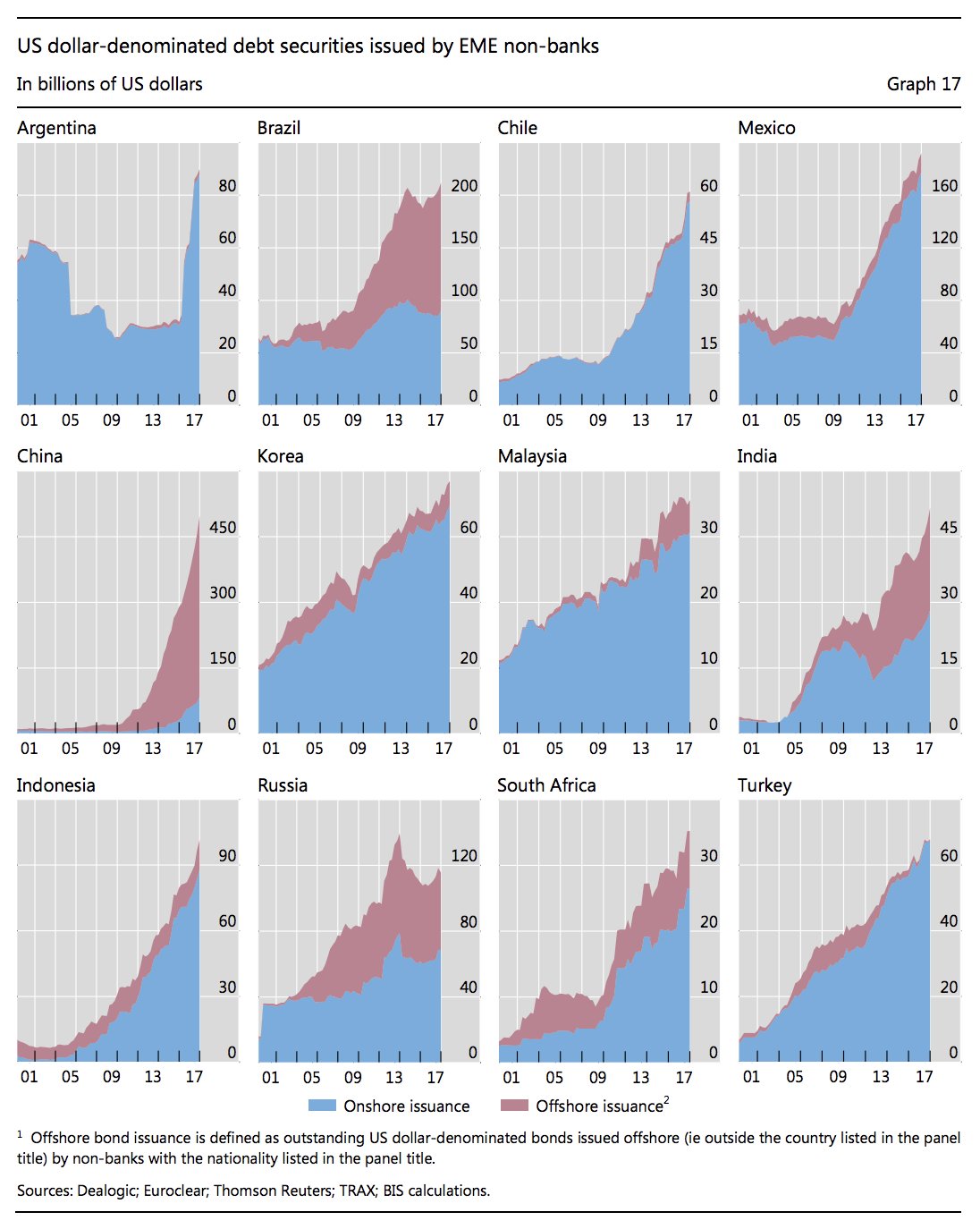 What a boneheaded move! No other way to describe it.

When the US got themselves into problems in 2008, they flooded the world with liquidity. Instead of saying “no thanks – we have seen this movie before”, emerging markets gulped it down in record amounts in what could be one of the dumbest financial moves in decades. 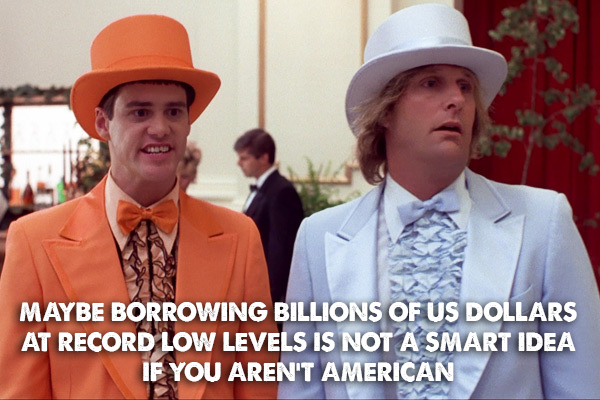 So that leaves us with the question of where go from here?

Does the large US dollar borrowing cause the US dollar to rally even more?

Although the last month of EM FX weakness has hurt, it’s actually a much longer-term story as the currencies have been falling steadily over the past eight years. 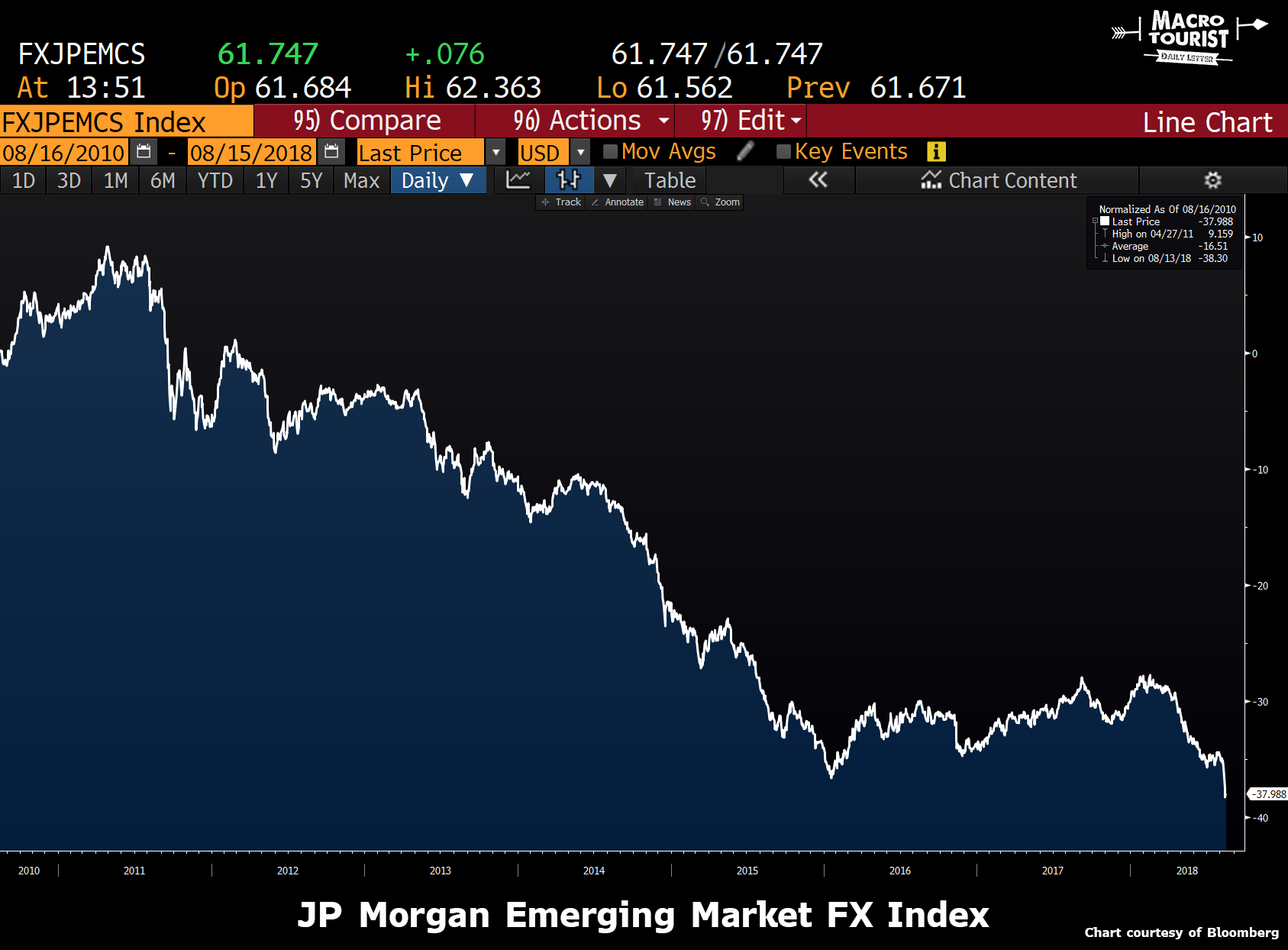 The JP Morgan Emerging Market FX Index is down almost 40% during this period.

Imagine writing what you think is a cheap loan, but only having to pay it back in another currency whose value rallies year after year.

That’s what’s happening. So although a weaker currency might be beneficial for EM economies, their liabilities are rising at a fierce rate as their currencies collapse. Combine that with the fact that US dollar liquidity – which used to be so abundant – is now shrinking making it more and more difficult to roll the borrowing, makes for a nightmare scenario. Then for the final kick in the pants, Trump is raising tariffs on products making it almost impossible for the EM economies to bounce by selling to what used to be the best consumer out there – Americans.

All of this explains how we got here, but does not help with portfolio allocation decisions. Does it get worse or better from here? Should you dump EM and buy America?

See also  Congress Regulating Themselves Is 100% Proof The Market Is Going to Crash Soon?

I am not sure. It all depends on how long until the Fed ends their tightening campaign.

Trump does not want a strong US dollar. He also doesn’t want higher interest rates. If it was up to him, I suspect he would put rates down, print like mad, and institute tons of import duties on foreign goods.

But he does not control monetary policy, so as he pushes down on the fiscal accelerator and also engages in inflationary tariff battles, the Fed’s natural reaction is to tighten even more aggressively. Yet all of this causes the negative feedback loop of a higher-US-dollar-lower-EM-asset-prices to gain steam. Eventually, the Federal Reserve’s withdrawing of monetary stimulus will cause the global economy to tip over into a recession.

So the real question is when does the Fed blink?

I don’t know. My guess is that it is later rather than sooner, but we are definitely getting closer with days like today.

There is only so much pain that the global economy can take from tighter Federal Reserve policy. The American dollar is still the world’s reserve currency and it’s clear that the first participant without a place to sit in this game of musical chairs is emerging markets. The next time the music stops it might be an asset class that hits much closer to home and causes Powell & Co. to re-evaluate policy.

When the Fed does in fact slow down the tightening, buy EM hand-over-fist. It’s cheap. But someone tell them to stop borrowing in another currency. When will they ever learn?