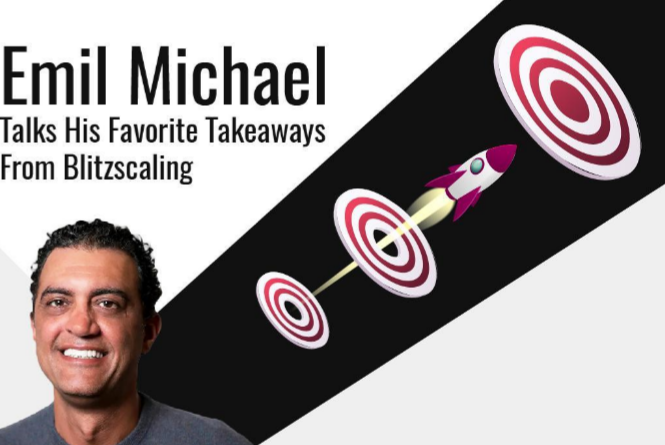 Tech exec Emil Michael understands the art of blitzscaling better than most entrepreneurs. Blitzscaling is the practice of building a brand and supporting operations quickly to serve a global audience. It isn’t for the faint of heart. The term was first coined by LinkedIn co-founder Reid Hoffman, and is also the title of a 2018 book.

Michael has been known to grow brands rapidly — he took ride-sharing into the global stratosphere. He recently appeared on “The Deep End” by On Deck and was interviewed by the podcast’s CEO Erik Torenberg. On the episode, the tech heavyweight — who oversaw ride-sharing expansion in China — went into detail on blitzscaling and why he appreciates it.

“The ambition to be global from day one was really rare before 2010, especially for a business that lived part in the digital space and part in the physical space,” Emil Michael says of the positive takeaways from his time at the No. 1 ride-sharing giant. “And so that ambition from day one was like, ‘OK, you have to have a system for that. You have to have a blitzscaling mentality for that.’”

Thinking one wants to be global actually helps create the system for how one blitzscales, according to Emil Michael. He describes the process as a company wanting to be in the top 100 cities in the world.

“What are the commonalities? What are the differences? How do we playbook them?” he questions. “How do we create materials so that you could give it to someone they can drop in a city and know 70% of what they need to know?”

While that was one lesson, Emil Michael told “The Deep End” another challenge was identifying interesting adjacent businesses and establishing a time line on whether those would be worth starting or not.

“I would argue that Uber Eats was started early and it made investors nervous, but it was the best idea we had to start that adjacent vertical alongside ride-sharing,” Emil Michael says. “I would argue also that investing in self-driving cars starting in 2013 or ’14 was a bit early, because [on] the investment cycle, the regulatory cycle, all those cycles, that means you consume a lot of cash on the way up. So blitzscaling has its limits. You’re going to not get it perfect if you’re truly blitzscaling.”

The other essential component to successful blitzscaling, according to Emil Michael, is hiring the right team members.

“People make a company. And when you’re blitzscaling, if you let go of the quality type, it multiplies faster,” he says. “So the actual culture and performance dilutes really fast in blitzscaling. It’s actually more important to keep your bar high there.”

Emil Michael says he has always put the time and effort into coordinating a corporate dream team. The DPCM Capital chairman and CEO has done it at every company he’s headed up.

While he admits the process can be long and painful, Emil Michael says it must be done.

“Not only will you get better at asking, you’ll get better at what kind of talent is out there,” he says. “You’ll get ideas on new things to look for, and you’ll create a machine. So you have this far-flung employee thing. You don’t quite have this problem just yet, but this far-flung group of people, we’d actually bring them back very frequently to trade notes and to create camaraderie and social connections and so on.”

by connecting the social fabric of the company together. “The ideas [were] traded faster, best practices got distributed faster. So those are the key things for leaders, I would say, in a blitzscaling company.”

“I have some hard, hard lessons here,” he says. “No one wants to believe this, but 50% of exec hires at a high-growth company fail,” Emil Michael says. “No matter how hard you work at it, no matter how much you interview, it is just how it is. Try to speed up the process because you know you’re not going to get it perfectly right on both sides.”

Emil Michael also shared that if something doesn’t work out, learn to let it go sooner rather than later. When hiring executives, he also warns to be aware of those who are doing it for the wrong reasons.

“Test for motivation, test for flexibility,” Emil Michael says. “Are they willing to learn a new playbook? Are they willing to say [things] like, ‘I’ll come in with nobody and I’ll hire all new people? I’ll manage people you hired?’ How flexible are they really? So ask them how they’d build their organization. And if their first go-to is, ‘I’d go to the people I had who worked for me at so-and-so company,’ that’s also [a] red flag.”

Emil Michael also discussed the delicate balance of effective management and what happens when a manager isn’t the right fit.