– ECB has just loosened monetary policy. What if that isn’t enough?
– ECB says the risks to Europe’s economies lean to the downside
– Trade wars could get worse and political turbulence could increase
– Brexit, could deliver an especially brutal blow
– Euro set to depreciate against gold (see chart)

By Bloomberg Editorial Board 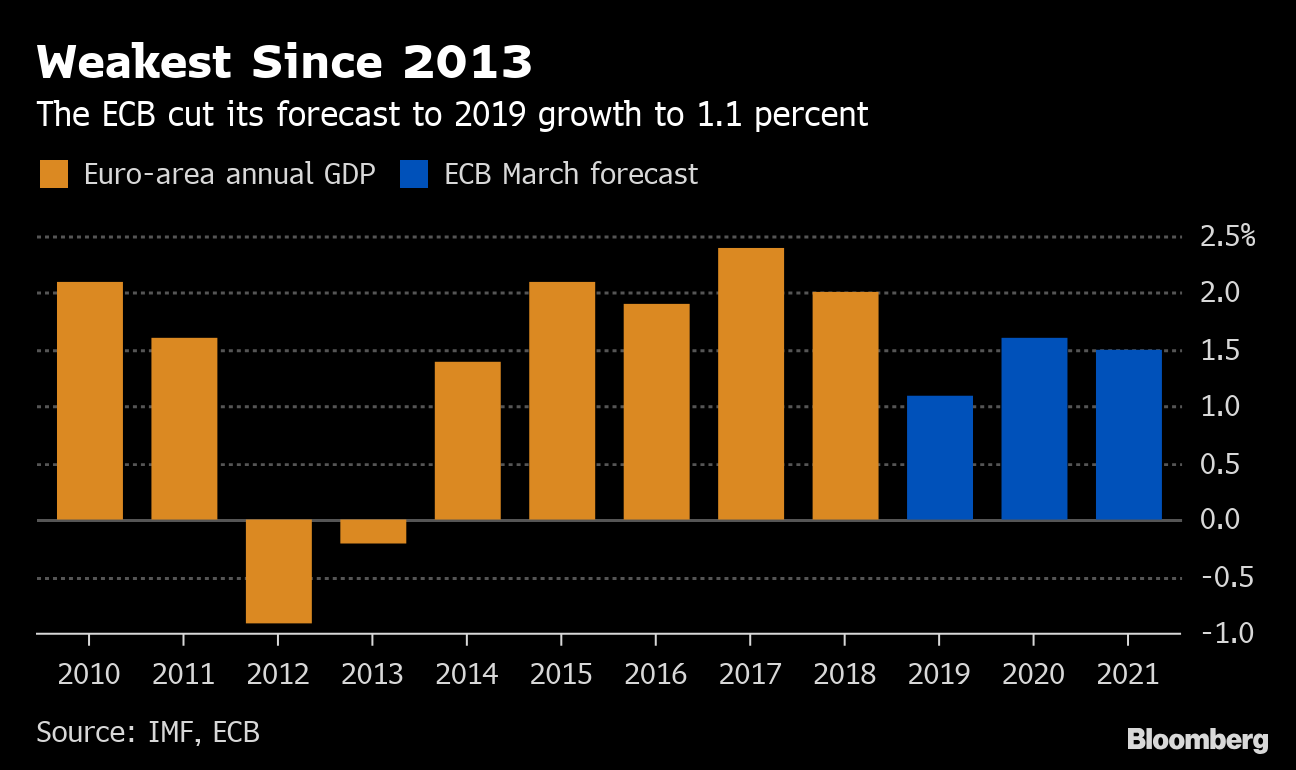 The prospects for growth in the euro zone have dimmed lately, and policy was going to be tweaked at some point unless things picked up. But a change wasn’t expected so soon. ECB President Mario Draghi and his colleagues are apparently worried.

They have reason to be. Their main problem, however, isn’t the precise timing of monetary adjustments like the ones announced this week. It’s the lack of good options if things get any worse.

The ECB’s new projections show growth in the euro zone slowing this year to just 1.1 percent; in December the central bank had predicted 1.7 percent. That’s roughly in line with other recent downgrades from the International Monetary Fund and the Organization for Economic Cooperation and Development. 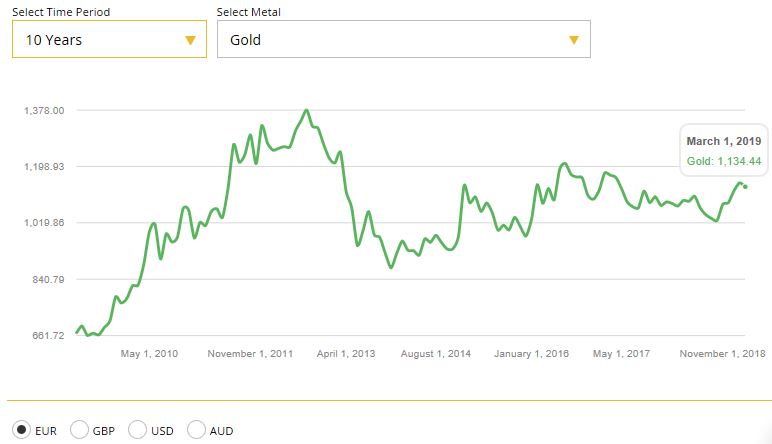 The picture varies a lot from country to country within the euro area, and a number of one-off factors have been at work — but across the bloc, slowing international trade and rising political uncertainty have taken a toll. The OECD expects growth of just 0.7 percent this year in Germany, for instance; it thinks Italy’s output will be lower than last year, and will manage only a feeble recovery in 2020.

READ  Is The COVID-19 Recession Over?

In response the ECB said its policy rate will stay at zero at least through December, extending its previous guidance by months. And it announced new issues of cheap long-term loans to banks. Yet the actual stimulus provided by these measures will be small at best. In fact, the combination of signaling new concern about the prospects and announcing changes with limited force could turn out to subtract from future demand rather than add to it.

Given its own rules, there’s not much else the ECB can do. The policy rate is zero, and the central bank’s deposit rate is slightly negative. Taking rates farther into negative territory might rattle confidence and destabilize the financial system. Meanwhile the ECB’s enormous bond-buying program, which was paused three months ago, is constrained by rules about the composition of its holdings. These were intended to stop the central bank from disproportionately financing the outlays of high-borrowing countries — such as Italy. They mean the ECB has more or less run out of room.

Monetary policy isn’t enough — and if slow growth in the euro zone should tip into outright recession, Europe will no longer be able to avoid a drastic rethinking of macroeconomic policy. The lack of a sufficiently powerful fiscal instrument is already holding the bloc back. The consequence has been high unemployment, slow growth and less-than-target inflation. If things get any worse, the only effective remedy would be a forceful, coordinated push from tax cuts and/or higher public spending.

Year after year, Europe has dodged this necessary discussion. No further delay should be tolerated. Even after cutting its growth forecasts, the ECB says the risks to Europe’s economies lean to the downside.

Trade-policy frictions could get worse, not better. Political turbulence could increase, not subside.

And Brexit, a big setback for Europe on any plausible projection, could deliver an especially brutal blow if no deal is reached to minimize the disruption.

The ECB says that outright recession is unlikely. If it’s wrong, policy makers will be all but helpless.

Europe can no longer risk being so seriously underequipped. It needs an effective fiscal-policy instrument — at the very least, a bold new approach to fiscal coordination. With the risks mounting, the problem demands immediate attention.