The daily sentiment index had some extreme readings in this pair so could pause or rebound soon.

The commitment of traders positioning has not moved much yet though so there is fuel for a much larger move long term.

This is how panic starts….this is just 20 minutes ago as European markets closed.

“As Europe closed, investors flooded out of Italian assets, pushing the nation’s sovereign bond yields to the extremes of the day and for the first time since Dec 2011, inverting Italy’s sovereign risk yield curve…”

These are some of the most insolvent countries in the world…their debt is owned, collateralized and sold into derivatives by pretty much every major central bank.

the EU is telling them to go fuck themselves too..

“Laura Agea, said “we ask European Commission President Jean-Claude Juncker to immediately deny Commissioner Oettinger. Quoted by Ansa, she said “his words are of an unprecedented gravity and are proof of the clear manipulations that Italian democracy has suffered in the last few days”.”

even Soros sees it coming.

“The EU is in an existential crisis. Everything that could go wrong has gone wrong,” he said.

There have been warning signs for months now…

If you’ve been paying attention to Western debt markets and Equities you get a sense that things are very tense and Panic is close by.

Everybody’s still playing the game but they’re ready RUN for the exit every time somebody even farts..

“The only way to prevent an all-out collapse, Soros explained, would be a 30 billion euro ($35.4 billion) “Marshall Plan” for Africa that Soros believes would help stem the flow of migrants into Europe, something that, Soros finally admits, is one of the biggest problems facing Europe. The EU, Soros believes, should use its “largely unused” borrowing authority to finance the plan.”

Yeah, as if all-out collapse wasn’t designed and orchestrated BY this pathetic lizard dinosaur bastard.

READ  DC is ghost town, smoke coming out of the ground 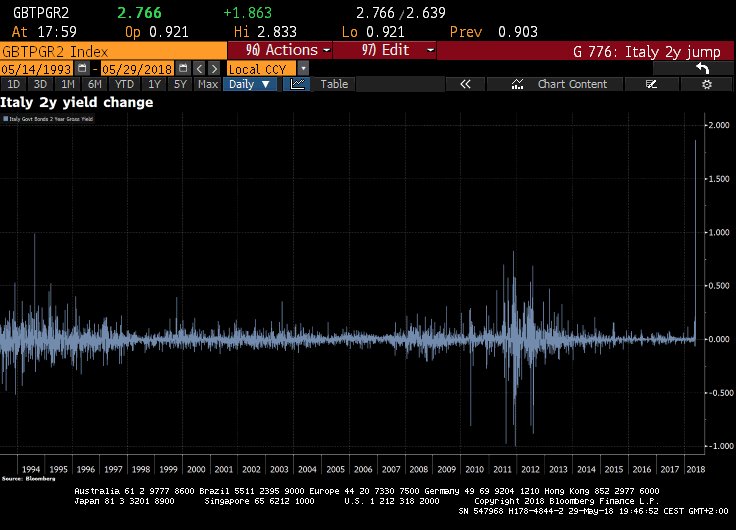 BREAKING. Also Cottarelli, the PM designated by #Italy president Mattarella, is rumored to give up soon! New elections now can take place anytime, even next July.

I’m not sure if that even matters at this point..

The entire system is so vulnerable to any sort of jolt that the fuse may already have been lit.

please do not panic $DB. Everything is awesome. pic.twitter.com/rdWRIQsfNa

#Italy's Meltdown Was Predicted – Had You Been Following #PlanetPonzi, #StacyHerbert, #MaxKeiser and Watching The #KeiserReport! Today's Chart: Too Much Debt, Credit & Leverage – What Could Possibly Go Wrong? REMEMBER: "You Can Never Taper A Ponzi Scheme!" pic.twitter.com/4bhVjvgMEV