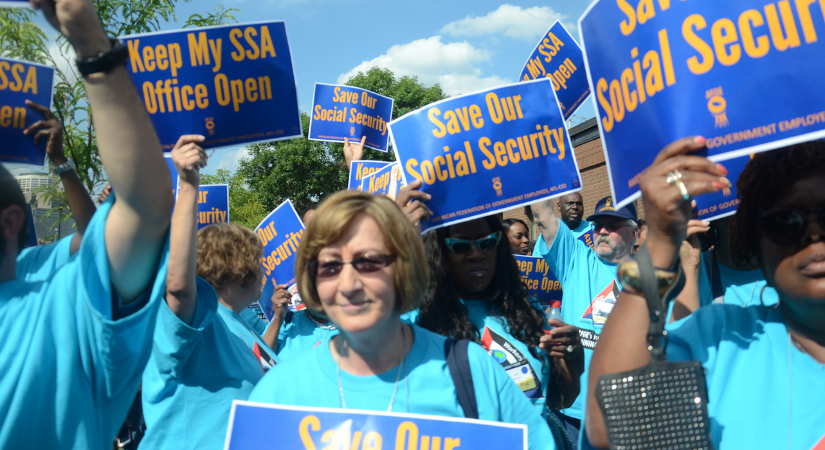 We’ve known that Social Security has been on the verge of a substantial change (at minimum) for quite some time.

You can see how disturbing things could turn out by looking at the bar graph below from Peter G. Peterson Foundation. It reveals a cumulative cash deficit of $2.9 trillion from now to 2035, after which, the trust fund (Social Security’s bank account) will be empty:

If that weren’t disturbing enough, now employees that work at the Social Security Administration are sounding the alarm, too. According to the Federal Times:

Employees at the Social Security Administration overwhelmingly do not have confidence in their leadership’s ability to successfully direct the agency, according to surveys released by two employee associations Dec. 9.

Don’t like charts? In summary, Social Security is running a major cash deficit that will eat up all available cash by 2035. At the same time, we have employees calling into question the leadership ability at the SSA.

The pandemic complicated matters even further when SSA leaders canceled a work-from-home policy. According to the same Federal Times piece:

Prior to the pandemic, SSA came under scrutiny for rolling back a years-long telework program due to oversight and case backlog concerns. Watchdog reports, however, found that the agency had been able to respond to calls more efficiently under the telework program.

So it appears the Social Security Administration had something that worked reasonably well, and then ditched it. At the same time, many organizations not supported by your taxes and relying on profit to keep the doors open, have announced long-term or even permanent telework programs.

READ  What the left REALLY think about YOU: “Americans are so f**king dumb”

Seems like SSA employees are right to feel worried. And they aren’t the only ones…

Many Americans Are Concerned Social Security Could Disappear

Up until now, the U.S. government has reliably paid benefits to Social Security recipients since 1935, and Medicare benefits since 1965.

According to a recent study of more than 1,000 people of various age groups: “70% believe their Social Security benefits will be cut or eliminated by the time they retire.”

That doesn’t seem very encouraging at all.

A year and a half ago, we reported that Social Security was already moving behind the 8-ball if no constructive solution was offered. Nothing has been done, so the outlook today is more dire than it was then, which could help explain why 7 out of 10 future recipients are so pessimistic about future benefits.

Another interesting finding in the study showed more than half of the participants would opt-out of Social Security altogether if they could. This was based on fears of paying in and getting no benefits if the program were to disappear. No rational person wants to pay for a stranger’s golden years at the expense of their own retirement.

Joe Biden has promised some tax changes of his own that would apply to Social Security. We will have to wait and see if those changes get the results necessary to keep the program afloat.

One thing is certain, however. Time is running out for lawmakers to come up with a solution effective enough to inspire confidence in Americans nearing retirement age, whether or not they work for the SSA.

On the other hand, we should remember director James Cameron’s words: “Hope is not a strategy.”

Whether Social Security benefit cuts or other consequences take place before 2035 remains to be seen. But it’s best to prepare for the worst, and hope for the best.

Examine your retirement savings and make adjustments that don’t solely rely on Social Security, just in case. Which sounds more reasonable: blind faith in a federal bureaucracy with track record of incompetence and mismanagement? Or diversifying your savings by spreading your nest egg across several different baskets?

Those adjustments could also include holding physical assets like gold or silver. They have been shown to protect the value of your savings while also providing an inflation-resistant store of value used worldwide for thousands of years.