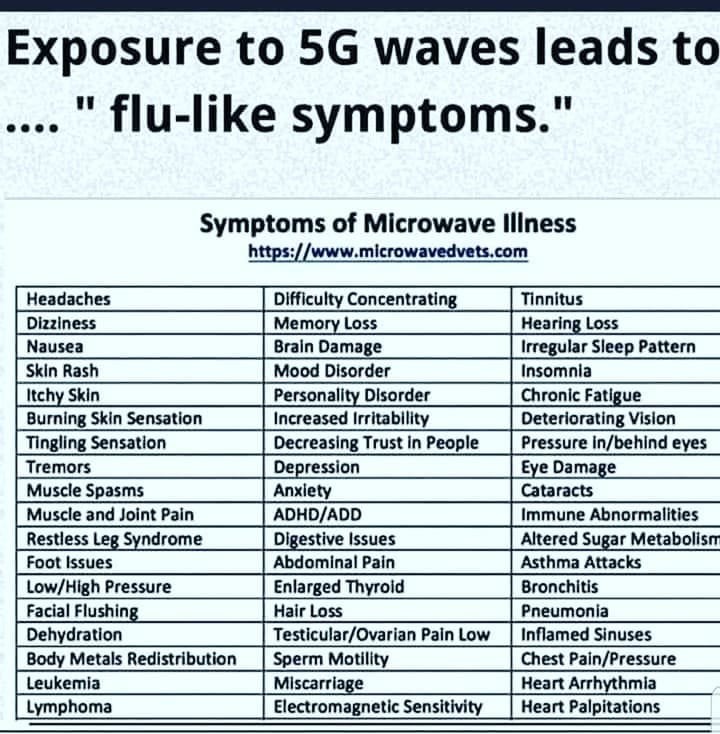 Just a bunch of discussions about 5G on this sub…

5g scares the hell out of me

These 5G fliers are being given out in my town but this seems like misinformation, thoughts?

Theres alot of strange stuff going on in my town…

Medical Association Concerned About Cancer and Damage to Nervous System

The First Report of 5G Injury from Switzerland

This is a website with information about the harmful effects of 5g from a number of scientists who do direct research in this area. This is coming from the most recent research, so when you see people say “its non ionizing therefor safe” you can point them to the resources on this site to show that they are incorrect. Take a look at the quotations from scientists here, no scientific background required emfscientist.org/index.php/science-policy/expert-emf-scientist-quotations

I personally believe that it is extremely important we oppose the 5g rollout, in my opinion we are entering into the end game and 5g is crucial to plans of subjugating the world’s population. The military has been conducting classified research since WW2 era regarding the effect of radiation on the body and mind. The wireless companies would like to put an order of magnitude more towers than exist for 4g, with the 5g frequency band being an order of magnitude higher than 4g. I believe bad actors could then hijack towers locally to harm individuals. Even if that worst case scenario doesn’t happen, the continued exposure especially in cities will be detrimental to health, causing low energy, irritability, poor sleep, poor reproductive health, and disrupted mental focus among other symptoms. The “internet of things” meme is being pushed on us so that data of every minute part of everyone’s lives can be harvested and catalogued by supercomputers for control purposes. No one needs these devices, in fact no one needs 5g, 4g is plenty fast enough. It is not a natural market progression, it is being forced for spying and control purposes.

Note that in America, the FCC has rules against local governments preventing the rollout of wireless network infrastructure. This is being used to override the local government’s decision to block 5g rollout in their town.

Doctors call for delaying deployment of 5G Due to Health Risks